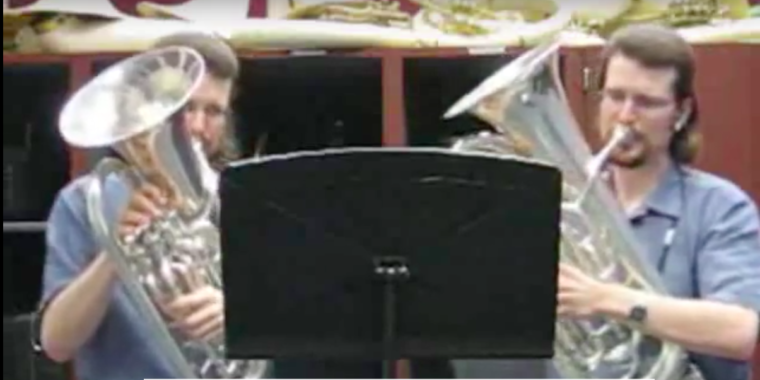 At the beginning of 2018, YouTube made changes to how we can jointly earn money through its affiliate program (or "YPP"). You've probably heard of this and, oh yes, here.

Now it seems a good time to describe my own (less tumultuous) story with YPP.

Before I become one of the residents grammar hammers at Ars Technica, I learned one-to-one tuba, euphonium and trombone lessons in public schools in the Houston / Galveston area. About 2001

I started arranging notes to play with my students.

Arranging music is fulfilling some of the reasons. First, perform music that is otherwise not available for your instrument, and secondly, you get a different and deeper appreciation for a music after you have to take it apart and put it back together in a new form. It resembles how a transmission only appreciates a car engine after spending weeks under the cover of engine oil.

Sometimes around 2008 I got it in my mind that I wanted to try to sell my transcriptions online. My first collection of arrangements featured music of stalwarts like Bach, Beethoven, Purcell, Vivaldi and Chopin.

Why they and not, says Nelly, who was one of the best-selling artists between 2000 and 2010? Because Nelly is still alive, remarkably, that's why. If you want to sell music arrangements by someone who still lives, copyright laws require you to review music publishers and devices like ASCAP to ensure that the original creator gets a reduction of all the money you make. Some publishers also want to estimate how many events to sell and want you to pay royalties before selling a copy.

But – and it came to me while I ate 45-cent wings on BW3 – what if I like to upload YouTube videos as a commercial video that I play copyrighted songs on the tuba?

I was able to record both parts of a duet, and with a hundred-year-old movie screen, I could create the illusion that there were two of me who played both parts simultaneously.

Why The legend of Zelda ?

What is the audience of YouTube videos of people playing tuba? Band children in college and high school, for one, and adult people nostalgic for when they were grandchildren in college and high school. And what do these people think? They like video games, movies, TV shows and what they hear on the radio. So the theme from The legend of Zelda – which I assumed was in the following Zelda game, maybe I might be an obvious choice.

As much as I would like to say that I figured out Zelda at the ear, I had five cats at that time. I was busy cleaning up vomiting. Even in the primordial wilderness of 2008, notifications on everything were already on the web. I must have found a transcript of Zelda for guitar or flute trio or ass trumpet and re-arranged it for the tuba / euphonium duet. I do not remember it. I have slept since then.

I tested the notes with my students. They seemed like it.

In an ideal world, this is where I would tell you about advanced HD camcorders, capacitor microphones, DATs and my home theater.

But no one has time for the jibber jabber. Instead, I used the video setting on the still camera as I received a wedding show in 2001. It was recorded in 15fps standard definition and had as one, a mega pixel? (Note: 2001 was another time.)

Instead of using a tripod for the camera, I used a music rack because I made the video in a band hall during a break between the after school classes (# Manhasset4Life). I played part I in a chair and part II in another chair next to it. Instead of listening to a track while recording another, I saved time by plugging earplugs from my iPod shuffle into a large format metronome.

The built-in microphone of the still camera was a room for noise so I used all the filters that Adobe Premiere Pro 2 had. Lowpass and DeNoiser are reliable. A dedicated sound processor would have had more powerful tools, but I'm not made of time. By cutting the left half of the Part I video and the right half of Part II video, I created an illusion of two players playing at the same time instead of just one lonely guy with good hairstyle.

If you look really-very close to my Zelda you can see some shared seconds of blurriness all the time. This is because, no matter how close you are called with a metronome, you will be leaving. But when you remove any frames in post-production you can come back to the pace. (Note: Blurriness is from the camera's autofocus. There was no way to reverse that shit again, 2001 was a completely different time.)

I could have spent every waking hour in May 2008 examining codecs so I could get the highest possible video quality based on YouTube's limitations. But I did not. That's why the image at the top of this article makes you think you need to check your eyes.

In 2007, YouTube shared advertising revenue with video uploaders as long as they did not upload copyrighted content . So, even if you did not upload music video for "Hot in Lord", you could not get money by running YouTube ads in front of it. If you were not Nelly then it is.

The same rules apply to my videos. I could not run ads in front of The legend about Zelda because the melody was copyrighted material. The sound of my video of the theme from Raiders of the Lost Ark was drawn even for a few months.

But time has an opportunity to change rules. Over the past two or three years, many copyright owners realized that instead of pulling out of my way from YouTubez, they could earn more dinero by allowing us to continue uploading our copyrighted material. These creators and YouTube also allow us to run ads with copyrighted content. The catch? Advertising revenue would be split between uploader, copyright owner and YouTube.

Suddenly, all the videos I uploaded to coax potential customers to buy my notes just a box click away from putting the cute, cute advertising dollars into my virtual pocket.

I do not think I've ever done more than a few hundred dollars a year in advertising. So … that was more than a hobby, but not really a sidebar? Let's say a "side piece". (That's what it means, right?)

Here's the email I received on YouTube on February 21st, but have not bothered me to read today:

As you probably heard, we recently announced updates to YouTube Partner Program (YPP) … [19659002] As of today, your channel, TubaPeter.com, will no longer have access to YPP revenue generation tools because it does not meet the new 4000 hour clock time limit within the last 12 months and 1,000 subscribers. If you meet the new threshold sometime in the future, you will automatically be evaluated for YPP. The reviews usually take 1-2 weeks.

Let's check how many times I have …

What is YouTube's motivation for this? I'm glad you asked, imaginary conversation.

With this program threshold, we can significantly improve our ability to identify creators that contribute positively to society and help drive more ad revenue to them (and away from bad actors). These standards also help us to prevent potentially inappropriate videos from earning money, which can harm the revenue for everyone.

So if you read this, I have to spend 650 hours on my YouTube channel.

How things have changed

Over the last decade I have been examining a 720p camcorder that I received from a friend. Sometimes I use an XLR microphone that goes into a handheld TASCAM, but I think the Rock Band branded USB microphone (indefinitely lent to me by the same friend who gave me the camcorder) may be better . Realmics tries to be as faithful as possible on real sounds while a Rock Band mic just wants to filter out garbage.

I'm sure that YouTube's current resolution is a million fps with the same dimensions as the Sistine Chapel's roof. The Premiere CS6 runs circles around Pro 2, and it probably has a built-in split-screen feature that I have not investigated yet. My arrangements are now available in a variety of formats on a variety of websites. And moving sites, such as Notes Plus, have streamlined the process of selling new arrangements of copyrighted music by live artists and composers.

The description of this process may seem like a bit of cutting corners and my website (www.TubaPeter.com) is probably the most rinky thing you've ever seen (I'm not what you would call "tech-savvy;" in Actually, according to the standards of Ars Technica, I'm practically a jock.) But my goal was never to do the awesomest video of the badass-est-tubist who played the hardest event ever. My goal was to make music for children who went after the band or marching repetition. Finding a printout of one of my arrangements in a band hall filing cabinet or watching a nice video of teenagers playing my Godfather Theme is what I think is satisfactory.

Then gave my narrow potential audience and the new YPP, my setting will not likely change or have any amazing exciting additions anytime soon. But even if it did, I would still use music venues instead of tripod. Need to stay on brand.