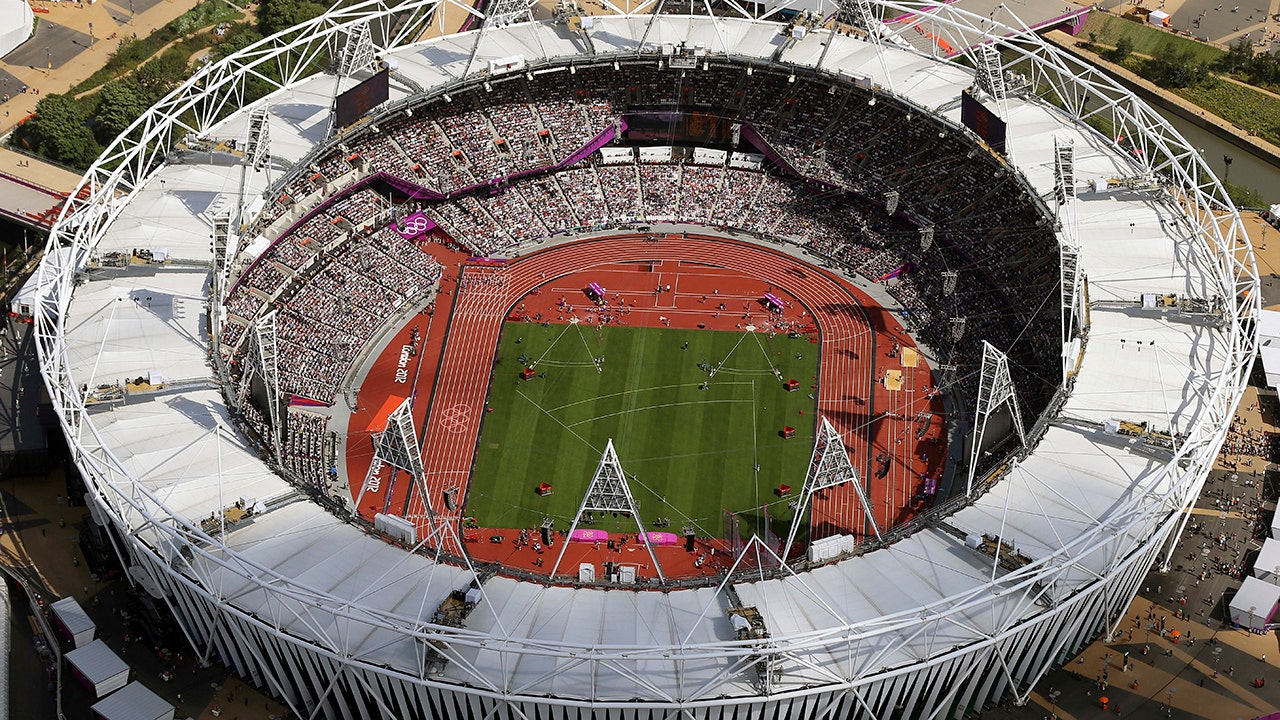 The traditional rivalry of New York Yankees and the Boston Red Sox will take a radical twist when they meet in London next month: They will play on artificial turf for the first time in more than 2,200 games over a century. Major League Baseball has access to Olympic Stadium for 21 days before the games on June 29 and 30, the sport's first regular-season contests in Europe, and just five days after to clear out. (AP Photo / Jeff J Mitchell, Pool, File)

The traditional rivalry between the New York Yankees and Boston Red Sox will take a radical twist when they meet in London next month: They will play on artificial turf for the first time in more than 2,200 games over a century.

Major League Baseball has access to Olympic Stadium for 21 days before the games on June 29 and 30, the sport's first regular-season contests in Europe, and just five days after to clear out. The league ended up there was not enough time to install real grass.

Starting June 6, gravel will be placed over the covering protecting West Ham's grass soccer pitch and running track that is a legacy from the 2012 Olympics. The artificial turf baseball field, similar to modern surfaces used by a few big league clubs, will be installed atop that.

"It's the first Yankees-Red Sox game out of the country, so why not a lot of firsts?" New York pitcher CC Sabathia said, "I think it will be found." Instead, 141,913 square feet of FieldTurf Vertex will be transported by truck starting June 4 from the company's plant in Auchel, France, a little over 150 miles ( 240 kilometers) to a storage facility outside London, according to Murray Cook, the former big league general manager who is the sports field consultant.

Clay for the pitcher's mound and home plate area comes from DuraEdge in Slippery Rock, Pennsylvania. Turface Athletics near Chicago provides the soil conditioner, while mound tamps, infield drags and nail drags are from Beacon Athletics in Middleton, Wisconsin. The U.S. materials, including 345 tons of dirt in 18 40-foot containers, left Port Elizabeth, New Jersey, during the third week of April and arrived on May 18 at Port of Felixstowe in Suffolk, about 95 miles (150 kilometers) from London. Fence padding was manufactured at Covermaster outside Toronto and shipped from Montreal.

"We looked really hard at doing a natural grass system," Cook said. re going with a synthetic system and it helps us couple ways. It's a little more sustainable, because we're going back next year. If we went with a natural grass system, we'd have to bulldoze it all up, throw it away and then buy it again, build it all up, throw it away again. "Only three of the 30 major league teams play on artificial surfaces – Toronto, Tampa Bay and Arizona. Rogers Center in Toronto and Tropicana Field in St. Petersburg, Florida, has never had grass. Arizona switched this season from grass to turf, as will Texas when its new ballpark opens next spring.

Olympic stadium, like the regular ballparks, will have full dirt infields rather than the square dirt patches popular during artificial turf's height – there was a high of 10 synthetic fields in the major leagues from 1977-78 and again from 1982-94.

"I'm assuming it's like Toronto's or Tampa's, so it shouldn't be an issue," Yankees manager Aaron Boone said

Boston is the home team for both games in London, but the Yankees and Red Sox will both wear their white home uniforms. When the Yankees last played overseas in an opening-two game series at the Tokyo Dome in 2004, New York home of the Devil Rays road grays, even though Tampa Bay was the home team and batted load.

Foul poles, a batter's eye, a backstop and fencing will be erected, along with two dugouts – Red Sox on the first base side and the Yankees on third. Temporary clubhouses will be built on the warmup track under the stands – the soccer locker rooms are too small – along with batting cages. Because holes have been made in the running track, weights will secure the fences, similar to what has been installed when the Los Angeles Dodgers and Diamondbacks played in 2014 at the Sydney Cricket Ground in Australia. opened in 1845, for games between Boston and New York Mets minor leaguers in October 1993 – the first of two was rained out.

Olympic stadium will also be the site of major league games in 2020 – a series between the Chicago Cubs and St. Louis Cardinals is the leading candidate.

"This way we've got a synthetic turf system that's got two games on this year, two games on the next year and then the commissioner can do what he wants to do with the system, whether he wants to have another event somewhere, sell it or donate it or whatever they want to do, "said Cook, a former GM of the Yankees, Montreal and Cincinnati.

"Just got to keep the ball on the ground, I guess," he said.
Source link