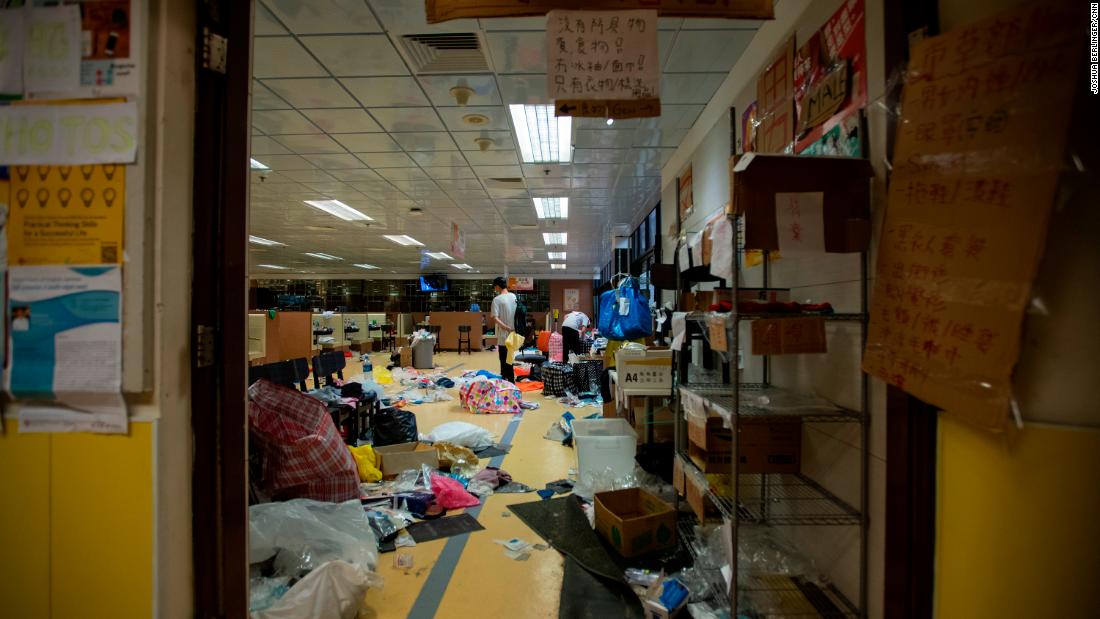 Once inside, they soon faced an impossible choice: stay until storage ends, or leave the university and run the risk of being teared up and arrested for riots, a charge that could get a 10-year prison term.

Police have been on the outskirts of campus for more than two days, shooting around after tear gas at protesters who responded with makeshift gasoline bombs, catapults and bows and arrows.

By Tuesday morning, the violence had subsided and the campus was in ruins. Only a small number of protesters remain at the university.

There was a noticeable stench of rubbish and gasoline burning on one of the campus entrances that burned his nose.

Thousands of unused petrol bombs litter the campus on the way to the canteen, which had become something of a headquarters for the protesters.

Only about 50 protesters were in when CNN visited Tuesday morning. Some slept while others looked aimlessly at their phones.

An 18-year-old in a black ski mask sat next to the entrance. Only his eyes were visible on his face. His hands seemed to have new cuts on them.

He told CNN that he arrived at PolyU two days ago. But things had changed on Tuesday.

Fewer people were in the streets outside and the number of protesters inside was dropping.

Protesters have been on the PolyU campus since last week, following an escalation in the months-long turmoil that saw several universities in the city fortified and turned into temporary protest camps. They had used the PolyU campus as a base from which they started operations to block nearby roads and the Tunnel over the port connecting Kowloon to the island of Hong Kong.

On Tuesday, the police had surrounded the school and it did not appear to be a way out. A handful of desperate protesters managed to glimpse a rope from a bridge and get away on motorcycles.

The teenager in the canteen said he had barely slept because of fear that the police might storm the campus at any time.

"I'm definitely very tired," he said. "I try my best to look for a way out. Although I know that the chance to (find) a safe way out is less and less of the other."

The teenager, like everyone who spoke to CNN, refused to give his real name or have his photograph taken because he feared being identified and arrested by police.

Across the hall from the canteen, protesters had turned the high school into a dormitory, despite an alarm going off. Several people were still sleeping there around 11:30 in the morning when CNN visited.

[19659024] On the outside, groups of abusive protesters were looking for exits near the Jockey Club Innovation Tower, an impressive architectural piece designed by Zaha Hadid. Several people tried to skip a freeway near the pool, which had been emptied and used for Molotov cocktail throwing. Protesters have justified this type of violence as proportionate and intended to keep the police in check, but authorities say their actions are dangerous and potentially deadly. 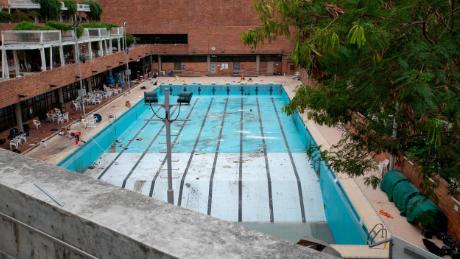 One of those who looked out was a surgeon who identified himself as Dr. Chiu. Chiu had arrived as part of a group of first-aid volunteers two days earlier, and said he was treating some pretty serious wounds – laces deep enough to see the muscles, broken ribs and a fractured arm among them.

The less experienced volunteers who worked with him sometimes struggled. "I saw many other first-aiders and other students, kids – they all cry," Chiu said.

He paused, took a deep breath, and continued: He said he had hoped that this generation of young people could have avoided this experience.

"They should not bear this kind of responsibility."

But Chiu also said it was important to be empathetic with Hong Kong's police force, which has been criticized for alleged police brutality during the city's almost six months of protests.

"They've been under a lot of pressure these months," Chiu said.

Chiu then went off and looked for an exit. After a few hundred yards behind was a group of three girls, including a 14-year-old who would not give us his real name, but wanted to be called "Hannah."

Hannah said she came to defend not only PolyU, but the city and its freedom. She said she felt it was important for young people to fight for their freedoms and a democratic system.

"I know it is difficult for everyone and for us as well. But before the authoritarian government, we cannot be afraid. We must continue," Hannah said.

Hannah explained that the situation has not been easy.

Like everyone else on campus during the protest crew, sleep for Hannah has been difficult to come by. She said that Monday morning – when police fired several rounds of tear gas in an attempt to clean up the campus – was particularly tough, as they were not fully prepared for their meeting with police.

Hannah said she has been a regular protester since they began to happen often back in June.

She is usually tasked with either neutralizing tear gas canisters fired by the police or throwing them back at the authorities.

"We have been here for over 48 hours now. It is very tough for us, but we are worried that the police can raid the campus. So we stay here and wait on rescue. "

Hannah said her mother was a group of parents who had gathered near the university to sit in, and asked the police to leave student protests inside the university without fear of arrest or injury.