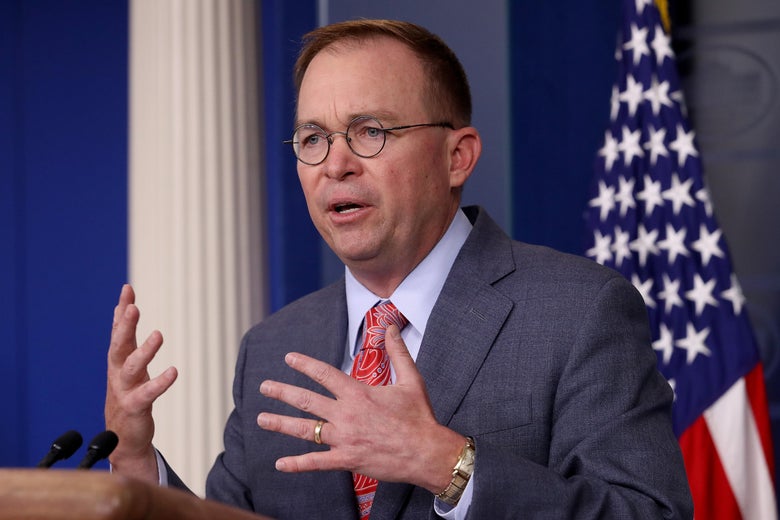 Acting White House Chief of Staff Mick Mulvaney tried to rewrite history in an interview on Fox News Sunday and host Chris Wallace was having none of it. Mulvaney tried to insist several times throughout the interview that reporters misinterpreted comments he made at a Thursday news conference about President Trump conditioning aid to Ukraine on launching political investigations. But Wallace repeatedly exposed Mulvaney with his own words to demonstrate that what he said was not what he claimed.

Wallace asked Mulvaney why he had said "that aid to Ukraine depended on investigating the Democrats." But Mulvaney denied he ever said that : "Again, that's not what I said. That's what people said I The acting White House chief of staff went on to claim he said "there were two reasons we held up the aid," listing corruption concerns and pressuring European countries to give Ukraine more aid. But Wallace fired back saying that Mulvaney actually cited "three conditions" on Thursday. "Not only did you say investigating the Democrats was one of the three conditions, not two, that you would just say that you would talk about, investigating the Democrats was part of the quid pro quo," Wallace said. the case but Wallace continued to press the point: "I hate to go through this but you said what you said."

Mulvaney tried to argue that while the president had mentioned the The Democratic National Committee server "from time to time" ultimately "wasn't connected to the aid." Wallace said that "anyone listening to what you said in that briefing could come to only one conclusion." There was so much back and forth and Mulvaney continued to say he did not say something to the point where at one point Wallace shot back: "You totally said that." Mulvaney then repeatedly said that the important part is that he did not use the term quid pro quo "because there is not a quid pro quo."

After lots of going around in circles on the issue, Wallace asked Mulvaney if he had offered his resignation to Trump due to the criticism he received over the briefing. "Absolutely not," Mulvaney said, insisting the issue was even discussed. "Very happy working there," Mulvaney said. "Did I have the perfect press conference? No. But again, the facts were on our side. ”CNN reported on Sunday that some Trump insiders were working to push Mulvaney out before Democrats decided to move forward with their impeachment inquiry. Top aides, including Jared Kushner, were reportedly already looking for a potential replacement for the position. Now those efforts have taken a back seat with the White House focusing its energy on impeachment.

Readers like you make our work possible. Help us continue to provide the reporting, commentary and criticism you find anywhere else.