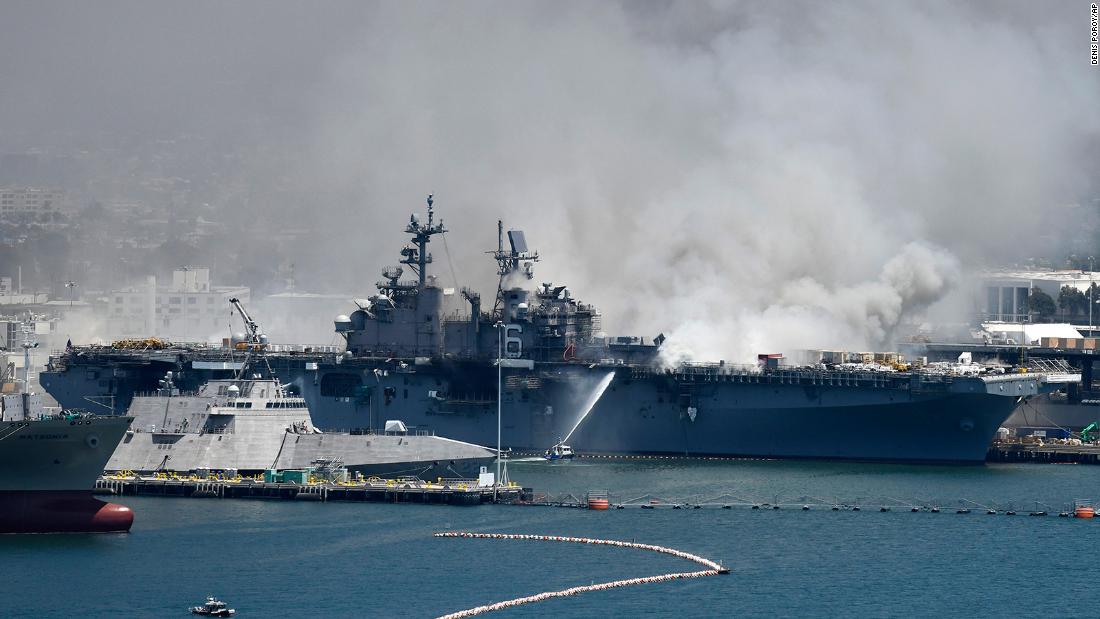 There were 160 people aboard the USS Bonhomme Richard deployed at the San Diego Naval Base in California when a fire occurred and an internal explosion occurred around 8:30 a.m., said the commander of the Expeditionary Strike Group Three, behind Adm. Philip Sobeck in a press conference on Sunday evening.

All aboard were reported, but 17 sailors and four civilians suffered life-threatening injuries, according to Sobeck.

He told reporters that the sailors were in stable condition at local hospitals Sunday night. The vessel, which has a crew of 1,000, underwent maintenance.

Stowell said “as soon as the crew began to board the ship, an explosion occurred.”

“The Navy is the only one that will operate from the dock side and port PD of the fire boats, which work from the water side to contain the heat from it,” according to Stowell.

From 23:30 on Sunday, defensive operations continued on the ship with two helicopters from Helicopter Sea Combat Squadron Three providing water buckets to assist in the battle, according to a Naval Surfaces Forces tweet.

Flames are driven by office supplies and other objects from the lower vehicle storage area where the fire started, Sobek said.

While investigators know where the fire started, they have not yet determined the cause of the fire. Sobeck reported an internal explosion caused by overpressure.

An on-site shelter was ordered on Sunday night for all people who did not respond to the base to maintain a 1,800-yard security perimeter while fires continue, Sobeck said.

Two other shipping companies, the USS Fitzgerald and the USS Russell, had to move further away as they were threatened by the fiery Bonhomme Richard, a media update from the fleet said Sunday afternoon. One moved around 1 pm and the other moved 30 minutes later.

Despite the damage, the ship has been on fire.

“We will definitely make sure that it sails again,” Sobeck said, “Right now we will fight the fire and then we will work to understand what exactly happened to make sure she sails as well as possible in a very close time. “