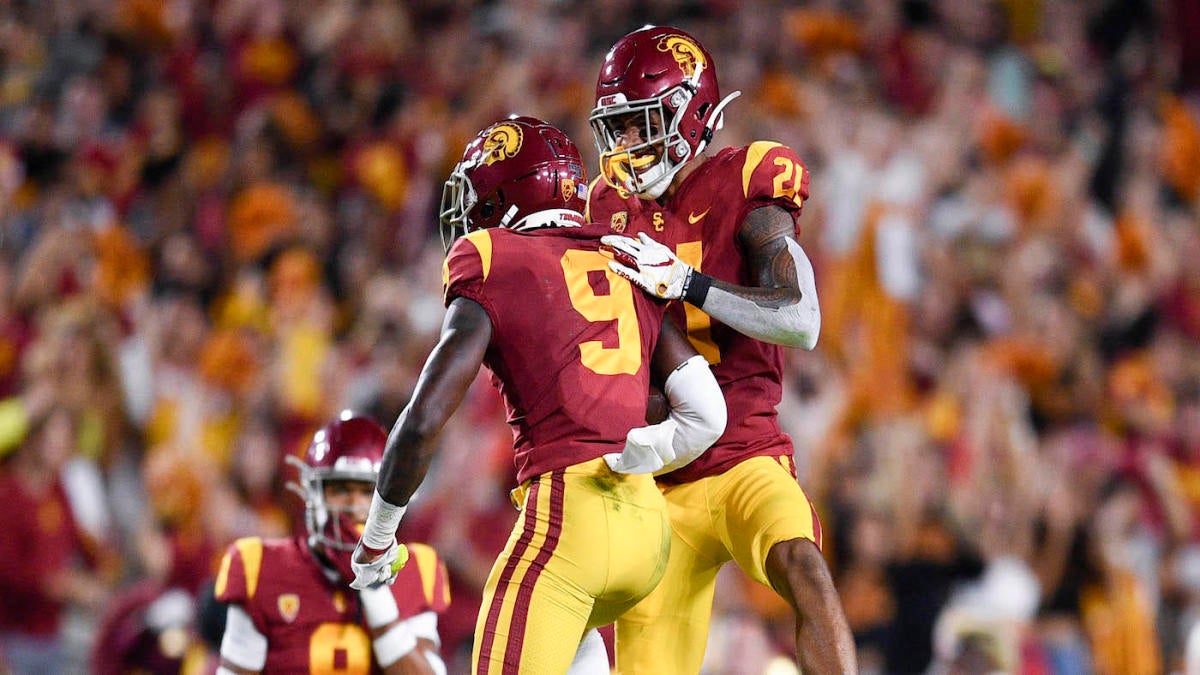 What would Week 4 be without a little # Pac12AfterDark on a Friday to get things kicked off before Saturday's action? No. 10 Utah and USC squared off in an early-season conference battle with important Pac-12 South implications. It wasn't the prettiest game, but the Trojans got the upset in the form of a 30-23 win.

The big story tonight was the injury to Trojans quarterback Kedon Slovis. The freshman took a brutal hit on USC's first possession of the game and was taken into the locker room. He did not return to the game, and coach Clay Helton said afterwards only that Slovis got " dinged ." He was replaced by backup Matt Fink, who had a big game off the bench.

So what did we learn from Friday night's set up in Los Angeles? Here are four takeaways from the Trojans and the Utes.

Matt Fink was odd, but effective when it mattered

A tale of this game will be that Fink came off the bench and led USC to victory, displaying the type of heroics that backups everywhere only hope to achieve. That's … kind of true? It's valid to say that Fink played well given the circumstances. He went 21-of-30 passing for 351 yards and three touchdowns – all of which were bombs. That's good for any quarterback in any game.

However, two of those touchdown passes that you can see above were jump balls pulled by USC's superior receivers. Fink played a game of ".500" and his guys came down with the rock. Conversely, Utah's defensive backs were routinely burned. Corners were beat often and safety play mistimed all kinds of throws. The defensive backfield sometimes gets an unfair amount of criticism relative to the pass defense, but not tonight. The Utes were getting beat over the top and on a lot of 50/50 balls.

There's also the matter of USC's overall offensive variance. After USC's first two possessions, the Trojans offense punted twice and fumbled the ball to close out the first half. Following Michael Pittman's touchdown in the third quarter, Fink threw a brutal interception on the run and the offense punted two more times. It wasn't until USC got the ball on a short field following a safety that it was able to score again. That's not a huge knock on Fink given his sudden entry into the game, but consider the following: 36 percent of USC's yards came on those three long touchdown passes. For the other 51 plays, USC averaged 4.8 yards per play.

Frankly, nothing about this game made sense. USC rushed for 13 yards on 22 attempts. Accepting the kneel downs at the end of the game, most of them ironically came on the final drive when the Trojans needed to close out the game. Otherwise, USC was hovering in negative yardage on the ground for most of the night. On top of that, USC committed 11 penalties for 117 yards and gave up a monster 30-yard first down run to Utes running back Devin Brumfield in the second quarter on a second-and-25. The Trojans also turned the ball over twice.

While those numbers may sound mind-boggling, Trojans fans will tell you that's just another week under Helton. You could argue USC's trademark under Helton has been undisciplined football lately. While people will (rightfully) take their shots at the Pac-12's officials, not every call was a bad one. USC has had a lot to clean up for a while. Being 3-1 against a decent schedule is good for Helton's job security, especially given the quarterback attraction, but it's not like it's been the cleanest football out there.

Utah found just about every way to lose this game

If you thought USC was undisciplined, wait until you get a load of the Utes. Where do you even start? Probably with the 16 penalties for 120 yards. Again, not every call was warranted, but plenty were. It's not the ref's fault every time Utah committed a false start or grabbed a jersey. Utah left points on the field, too, starting with a missed field goal in the first half that was technically blocked twice since USC was flagged for being offside on its first block.

Utah was especially bad in and just outside of the red zone. The Utes were stopped on downs at the USC 29-yard line and forced to settle for field goals at the 20-yard line (twice) and 7-yard line (when they were at the 1-yard line). They also fumbled once right before the half at the 2-yard line.

None of this, of course, is even mentioning that Utah outgained USC and held the ball for more than 38 minutes. Or that the defense got exposed badly. But shooting yourself in the foot and failing to finish drives are how you lose conference road games.

Losing Zack Moss is concerning in the long run

One thing Utah couldn't control was the injury to Moss, one of his top offensive weapons. The running back left the game with an apparent shoulder injury and did not return. For as tough as the Slovis injury was for USC, Moss' injury was far worse in terms of impact on the game. Utah overall found a way to adjust in the running game by rushing for 247 yards and 5 yards per clip. Not bad, but quarterback Tyler Huntley had 60 of those yards on 18 attempts, many of which were scrambles. Utah had a hard time getting tough yards, which hurt them in the red zone (see above). Utah's offensive line as a whole had a hard time containing USC's speedy and physical defensive front, and not having Moss there pick up the hard-earned yards after contact ended up being a killer. If he's out for an extended period of time, that's a big blow to Utah's offense.

Thanks for stopping by.

Seasonal update MLB 2020: Where things stand with the owners who will make a new financial proposal for players