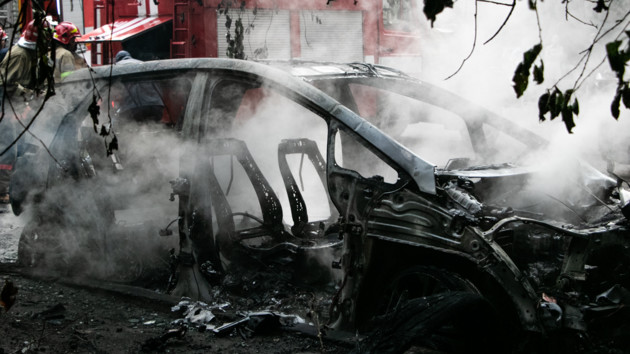 The owner of the car charged the battery and went to sleep, but after 10 minutes the car caught fire

after three foreign cars burned in the capital Osokorki in the center of Kiev it was a new emergency. According to Informator, on September 20, an electric car Chevrolet Bolt burned out in the yard in a residential building on Maria Primachenko Boulevard.

According to the car owner, a fire broke out after charging the car's battery. In particular, he loaded the vehicle and rested, and after 1

0 minutes he was informed that the car was burning. The fire itself, according to eyewitnesses, occurred from under the left rear wheel. This is where the batteries are. In this case, the car burned down completely, and the rescuers managed to prevent the spread of fire to a one-story extension.

Fortunately, no one was injured in the incident. three cars burned at home on the 25th Perov Boulevard in Kiev . All cars stood in the yard. The Toyota driver got into the car, lit the ignition, and at that time the car caught fire. Flames also engulfed cars nearby – Volkswagen Passat and Mercedes 230 E.

In addition, news of Segodnya wrote that on September 5 at midnight in the center of Kiev a fire broke out. On Vladimirskaya Street, 69 to the ground the Audi A7 car burned out. Rescuers were in place in just a few minutes, but almost nothing was left of the car. The incident attracted the attention of the residents of the neighboring houses. They said that the oldest son of ex-director of NBU Valeria Gontareva was driving an Audi.