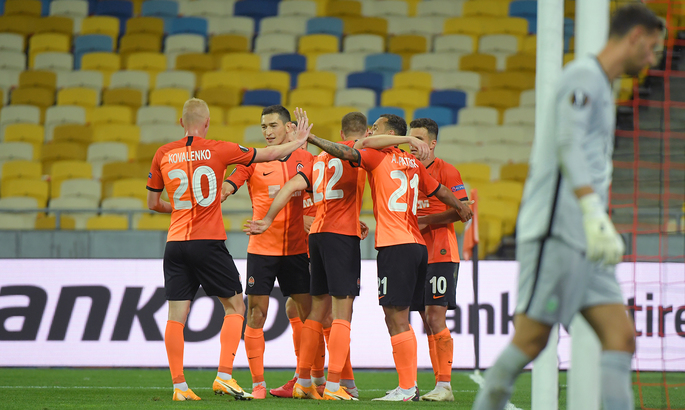 The miners played the second part of the 1/8 final against Wolfsburg. In general, Luis Castro’s team had a concrete advantage. The only worrying moment was when David Khocholava received a red card and broke a one-on-one exit. But Brooks quickly leveled the lineup (second yellow) and in the 80s, Moraes scored the first goal of the game. In the end, the match ended with a score of 3: 0 – Junior managed to make a double, Solomon scored another goal. In the quarter-finals, Shakhtar will face the winner of the Basel-Eintracht Frankfurt pair, who will play on Thursday.

In addition to Shakhtar, three other clubs won a ticket to the eight finals on Wednesday. “Copenhagen”

;, as we remember, left behind the tournament Kiev “Dynamo”, defeated “Istanbul Bashakshehir” – 3: 0 (the first match – 0: 1). Inter defeated Getafe 2: 0 (this pair only played one match), and Manchester United, after a LASK 5: 0 defeat in March, defeated the Austrians again, but with a smaller point – 2: 1.

The general manager of the Luhansk club, Stanislav Oganov, commented on the situation around the team’s head coach. So Viktor Skripnik is now preparing Zorya for the new season, he has a contract until 2022. “Dnepr-1” did not apply to the Luhansk team with an official proposal for a coach. Zarya did not enter into an agreement with Babich. Therefore, everything remains as it is. He also added that the club has signed a contract with Dynamo’s candidate Denis Yanakov, and is also looking for a right-back and a forward.

The organization’s organizing council was held on Wednesday. It was first planned that the date for the PFL Congress would be set there, a calendar would be developed and the rules for next season would be agreed. But something went wrong. More precisely, representatives of the clubs voted for the dismissal of the current head of the league, Sergei Makarov. He did not agree with such an initiative, closed the meeting and the PFL’s official website made a statement, the essence of which is that the delegates to the Council did not have the right to act in accordance with the regulations. Therefore, the situation has hung …

The golden lion on a green and white shield is one of the brightest emblems in Ukrainian football. Lviv “Karpaty” decided to generously transfer its symbol to one of the public organizations founded by fans. At the same time, the club took the road to save and quickly took a new logo from the standard database for templates. Confusion first arose – they say, why such a step? In time, however, it became clear that the current leadership of Karpaty, which is on the verge of bankruptcy, wants to keep weapons for the new version of the club. Therefore, you do not need to be surprised when your favorite Lviv coat of arms appears on a new football project.

Josep Guardiola does not betray himself – every summer he strengthens the defense. This time the “victim” of the Catalans’ appetite was “Bournemouth”. He brought up Nathan Ake to protect the cities. More precisely, he is a student of Chelsea, but he could not become an aristocrat, but he was in Bournemouth. For the 25-year-old center-back “City” poured 41 million pounds, at least so says the omniscient British media.