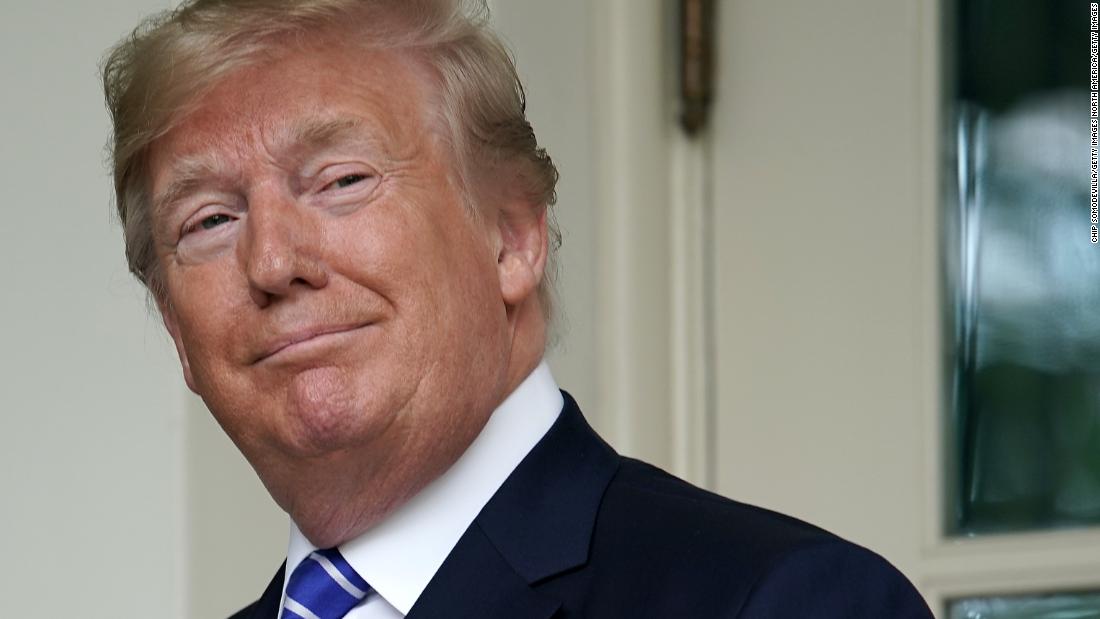 The latest manifestation of the Trump first foreign policy was instead another sign that national interest is often subordinate to this President's immediate political demands. In a characteristic but still shocking shattering of norms, the President of the United States actively lobbied a foreign government to refuse admission to two of his compatriots.

Trump's celebration of his success underscored how he plans to ignore any presidential guardrail in waging the cultural warfare on which he is relying to secure a second White House term.

"What they have said about Israel and Jewish people is a horrible thing, and they have become the face of the Democrat Party," Trump said, Hours after Israel announced its decision.

Trump habitually shows few qualms in using the powers of the presidency, which are especially broad in foreign policy, for his own personal ends. His denial of Russian election mediation and crush on North Korean leader Kim Jong Un for example both arguably promoted his image and ego over orthodox US global strategies.

But his power play against Israel was unapologetically partisan, even for Trump.

Many in Washington find the views of Omar and Tlaib towards Israel abhorrent. Omar was forced to apologize earlier this year after she suggested that support for the Jewish state in Congress was motivated by campaign contributions in remarks widely decried as anti-Semitic.

But there is widespread bipartisan concern about how the new travel ban could impact Israel's political standing in Congress where support for the Jewish state has been sweeping and bipartisan.

Even the pro-Israel US lobby group AIPAC, usually in lockstep with Trump and who has criticized the two lawmakers for their rhetoric, expressed disquiet, Despite making clear it disagreed with the views of Omar and Tlaib.

"We … believe every member of Congress should be able to visit and experience our democratic ally Israel firsthand," AIPAC tweeted.

The President's tweets also put Israeli Prime Minister Benjamin Netanyahu in a tough spot. Trump's public pressure on the Prime Minister risks leaving a leader, not usually seen as weak looking, put on at a perilous moment – with a new election approach that could end his long stranglehold on power in Israel.

None of that is likely to matter to Trump, since he pocketed a shrewdly engineered political win that helped distract from growing talk of a possible recession that could cast a cloud over his reelection hopes.

The President can now savor his success in returning Tlaib and Omar, who he wants to elevate as the Democratic Party's extreme, anti-Semitic face back to the 2020 political spotlight.

He got to burnish pro-Israel credentials popular with his base – especially evangelical voters who were previously delighted with his decision to recognize Jerusalem as Israel's capital. And it all happened hours before his latest reelection rally in New Hampshire.

Perhaps most pleasing for the President was the chance to jam Democratic leaders, such as House Speaker Nancy Pelosi, into defending key members of the so-called "squad" as when he stirred a racial furor by telling the four American lawmakers to "go back" to where they came from.

"The President's statements about the congresswomen are a sign of ignorance and disrespect, and beneath the dignity of the Office of the President, "Pelosi said in a statement.

The fact that Trump's hardball tactics sparked outrage among the diplomatic establishment and condemnation to the media was a clear added bonus from a day's work on Twitter for Trump.

Sovereign nations have every right to bar entry from critics that they believe do not share their values. And presidents have long considered their own political interests in dealing with Israel and treacherous Middle East politics. Advancing foreign policy goals has also long been a tool in reelection races – from Franklin Roosevelt to Richard Nixon to George H.W. Bush. But most presidents also seek to avoid the impression that they are acting purely for their own personal benefit. Often, their actions in the national interest risk prejudicing their own personal, political standing though in the end, serving to bolster their White House legacies.

The 45th President is cut from different cloth.

"Never has there been a President in my experience who has so subsumed the American national interest not only to his political interests but to his own personality sensibilities and in some respects his own vanity and ego, "Aaron David Miller, a Middle East peace negotiator for Democratic and GOP presidents, told CNN's Bianca Nobilo.

Some Republicans worry that all this could backfire and hand Omar and Tlaib a political reward for their outspoken criticism of Israel and their support for the Boycott, Divestment, Sanctions movement.

"Denying them entry into #Israel is a mistake. Being blocked is what they really hoped for all along in order to bolster their attacks against the Jewish state, "Florida GOP Sen. Marco Rubio tweeted.

The role of Washington's ambassador to Israel is also causing controversy. In a statement on Thursday, the envoy, David Friedman backed Israel's decision. But California Democratic Rep. Ted Lieu called on him to resign.

"He doesn't seem to understand that his allegiance to America is not a foreign power. He should be defending the rights of Americans to travel to other countries," Lieu told CNN's Wolf Blitzer on "The Situation Room." Lieu later tweeted a similar sentiment, but then deleted it because of criticisms that he was raising a dual loyalty allegation, an anti-Semitic trope.

Trump's intervention will also have political implications Inside Israel, some of which could rebound against Netanyahu.

Just a week ago, Israeli Ambassador to the US Ron Dermer said his country would not deny entry to two members of Congress. Tlaib had hoped to visit her Palestinian grandmother on the West Bank following her visit.

That the government he serves has now climbed down could leave Netanyahu looking like a supplicant of Trump who has outsourced Israeli sovereignty to a foreign leader. [19659002] Like other world leaders before him, Netanyahu has also learned that support from Trump must be repaid – in terms and at a time most favorable to the President's political goals.

Netanyahu has relentlessly promoted his relationship with Trump, including in the previous Israeli election earlier this year.

"Denying entry to members of the United States Congress is a sign of weakness, not strength. It will only hurt the US-Israeli relationship and support for Israel in America, "Senate Minority Leader Chuck Schumer said.

At some point, Netanyahu, or a future Israeli leader, will find themselves dealing with a Democratic president. The diplomatic fallout from Thursday's events will be in the background when those meetings occur.