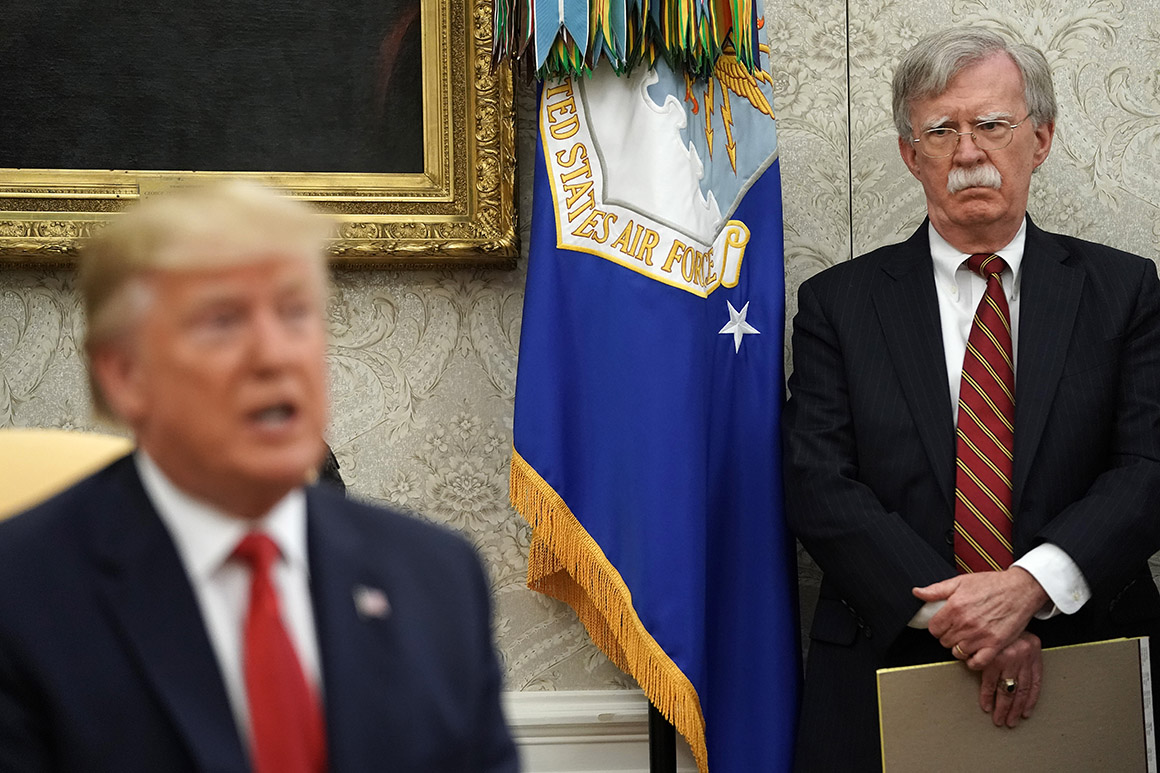 In recent days, national security adviser John Bolton, China, at both the National Security Council and State Department, prevails, and several economic advisers have pushed for a more independent stance on the demonstrations in Hong Kong, which have paralyzed the former British colony and roiled markets. .

The story continues below

They find some momentum with a president who focuses more closely on trade negotiations with Xi Jinping – an I was worried that criticism of the Chinese leader's efforts to rule out disagreements in Hong Kong will lead to the opportunity to color a store this winter.

As protests have intensified over the past month, the president has remained determined to keep China's human rights violations from complicating his trade negotiations, going so far as to make a unilateral concession to Xi at the end of the G-20 summit in June, according to three people who were informed about the conversation. Aspects of the conversation were first reported by the Financial Times.

When the two spoke by phone ahead of the international meeting, Trump surprised his aides when he told Xi that he would not condemn the Chinese government for a failure in Hong Kong. He understood that it was an internal issue where the United States would not interfere, he said.

By registering, you agree to receive POLITICO newsletters or alerts. You can unsubscribe at any time.

The president's commitment outside the cuff caused confusion within the administration. First, aides were unsure if there was a time horizon for the President's promise of silence, especially as he continued to utter at least mild support for the protesters.

Trump's mixed signals have led to muted and contradictory statements from elsewhere in the administration – as officials try to avoid breaking the commitment made by the president against Xi.

A question commented, one senior administrative official said only that "freedom of speech and assembly are core values ​​we share with the people of Hong Kong and these freedoms should be protected. The United States firmly rejects the view that we sponsor or call for the demonstrations. "

Former officials in both parties have been critical of the administration's attitude to China, although there is a broad agreement that the United States must be tougher against Beijing.

"What I see is kind of a basic arithmetic: lack of uniformity in administration, plus a lack of real understanding of how China works, is not as good as results," said Daniel Russel, who served as a higher national Security Assistant to President Barack Obama.

On Tuesday, Trump seemed to return to his engagement in June and repeatedly condemn recent protests in Hong Kong without condemning the Chinese government – even as protesters have shut down the city's lively airport amid escalating threats from the Beijing government.

"Many blame me and the United States for the problems that are going on in Hong Kong. I can't imagine why? ”Trump tweeted. "Our intelligence has informed us that the Chinese government is moving troops to the Hong Kong border," he added minutes later. "Everyone should be calm and safe!"

The dissonance between the White House and the other arms of the administration has persisted. Trump's comments, in particular, were less cautious than those of the State Department, which publicly backed Beijing after government officials disclosed personal information about a US diplomat who met with activists from Hong Kong's pro-democracy movement.

"Official Chinese media reports on our Hong Kong diplomat have gone from responsible to dangerous," tweeted Foreign Ministry spokesman Morgan Ortagus. “This has to end. The Chinese authorities know well, our accredited consular staff only do their jobs, just like diplomats from all other countries. "

A senior official at the Foreign Ministry said on Wednesday that – contrary to the president's desire to keep trade and human rights separate, the Chinese leaders' actions show that they are not fulfilling their commitments.

"They do not keep their word and they break their promises," said this official.

But the president's views were better articulated by Secretary of Commerce Wilbur Ross, who told CNBC's "Squawk Box" on Wednesday morning that the United States had no role to play in the dispute between China and Hong Kong, calling it an "internal issue" . "

"The president instead of flashing red lights gives a green light in power, and it is not sustainable in US politics," said Mike Green, who served as a leading official of the George W. B ush National Security Council

By registering, you agree to receive newsletters or alerts by email from POLITICO You can cancel your subscription at any time.

The President announced on Tuesday that he would delay the introduction of a ten percent duty on imports of Chinese – originally scheduled to take effect September 1 – until mid-December.

The move was not linked to the protests in Hong Kong, White House officials said, but it followed in the wake of a meeting with the president's trade team last week where his adviser told him that the customs notice had caused a riot from retailers, who protested the imposition of the tax in September e crushing holiday sales, according to a senior administrative official.

The president directed his trade representative, Robert Lighthizer, to design a solution. Lighthizer and his team suggested delaying customs duty until Dec. 15, this person said.

Although the president did not extract a concession from Xi in June when he promised to keep his mother in Hong Kong, several officials at the White House assumed he hoped to get the Chinese leader to move in his direction toward the trade. (So ​​far, only Trump has made concessions by delaying the introduction of proposed tariffs.)

Green, the former Bush administration, resembled the strategy with the one the president has tried to apply to North Korean dictator Kim Jong Un and promised to interrupt joint military exercises with South Korea in an attempt to please themselves with their counterpart.

The president is "certainly more interested in the economic side" of the US-China relationship, a Trump administrator acknowledged. “He prioritizes the trade conversation – that's his first priority, and I don't think he's shy about it. If he has a feeling that this will be disruptive – and this is something the Chinese will have a strong opinion about – he will make a decision based on where it fits in relation to his trade agreement. "

But it is not clear whether the concession will yield the results the president is seeking.

"If the president continues to be relatively handy in his comment, it will definitely buy him some goodwill with Xi Jinping and the leadership in China," said a person familiar with the US-Chinese relationship and who regularly talks to officials in both countries. "On the other hand, if the Chinese make the mistake of sending in troops, I think the president has a very tough time, not at least verbally, to take a tough stance."

Daniel Lippman contributed to this report.