Tokyo Braces for the Hottest Olympics Ever 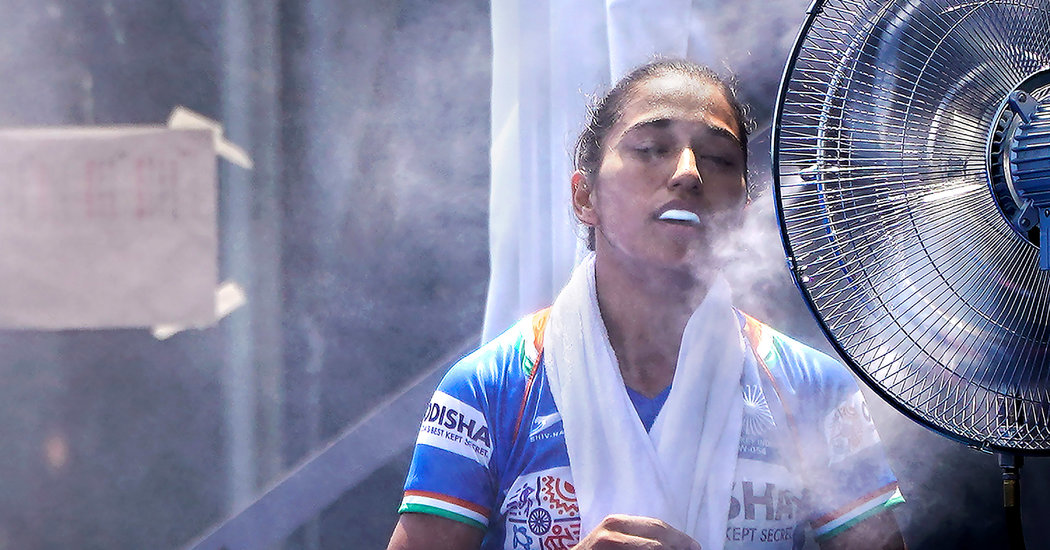 TOKYO – Japanese summers are known for their oppressive and sometimes deadly mix of heat and humidity. In late July and early August the past two years, more than 1,000 people, including more than 150 in Tokyo, died of heat-related causes. Tens of thousands were hospitalized.

That kind of heat led Olympic organizers in 1964 to move the Summer Olympics to October. Those Games began on Oct. 10 55 years ago in Tokyo.

Next year, when the Summer Olympics return to Japan's capital, they will open on July 24 and run until Aug. 9. It won't take an unusual heat wave to turn them into the hottest Olympics in history, endangering athletes, spectators, workers and volunteers. Yet in awarding the 2020 Summer Games to Tokyo in 201

So why was it so important to stage them in the thick of summer?

"It's essentially driven by American television, "Said Dick Pound, a longtime member of the Olympic committee and former chairman of its television negotiations committee.

Officially, the Olympic schedule is dictated by the IOC But because nearly three-quarters of I.O.C. Revenue comes from broadcast rights, and about half of those rights are paid by the American broadcaster NBC, the American sports calendar tends to have an outsize impact on Olympic scheduling. Baseball and football dominate American television screens in September and October. July and August, on the other hand, are relative voids.

The last time the Summer Olympics were held outside the July-August window was in 2000, when the Sydney Games were staged in late September. They remain the least watched Summer Games in the United States over the past several decades.

Ever since, the Olympic committee has told candidate cities that the Summer Games must be scheduled between July 15 and Aug. 31, barring "exceptional circumstances."

The committee offers a scattershot of explanations for that tight window, including a desire to align with the calendars of various sports federations and attract the likes of N.B.A. players in their off-season.

"It's just the question of not having conflicting sports events," Thomas Bach, the president of the International Olympic Committee, said in an interview at The New York Times.

But those in and around the Olympics know the power of television in Olympic decision-making.

The last serious bidder to propose alternative dates for the Summer Olympics was Doha, which also pitched for the 2020 slot, suggesting October to avoid Qatar's extraordinary summer temperatures. In I.O.C. working committee examining the proposals of five potential host cities gave Doha high marks in most areas, but highlighted the October dates as a problem. The committee concluded that "the impact on broadcast and the overall spectator / viewer Olympic experience, as outlined above, would be significant and could potentially have long-term effects."

"There is no question that television, especially NBC, the biggest fish in the pond, they do what they want," said Burns, the longtime Olympic consultant. “The I.O.C. will tell you they do, but they do. But you know what? They're paying the freight. "

NBC, which holds the United States media rights to the Olympics through 2032, said it does not dictate the schedule.

" Our goal is always to showcase the Games to the widest possible audience, whenever the IOC and the host city decide to stage them, ”NBC said in a statement. "Our confidence in the Olympics is so strong that we have repeatedly purchased the rights to multiple Games without knowing when or where they will take place."

Tokyo did not tempt fate, offering dates that fit the Olympic committee's parameters. Its bid played down any concerns over heat.

“With many days of mild and sunny weather, this period provides an ideal climate for athletes to perform at their best,” the proposal read.

The committee concluded: “Meteorological conditions during the proposed Games time would be reasonable. "

Richard Peterkin, an Olympic committee member from 2009 to 2018, said," In all of the bidding and presentations that they made that I heard, it just never came up. "

Now it dominates the conversation.

At its latitude, Tokyo is one of the hottest cities in the world during the summer months in which the Olympics will be held, according to Masahide Kimoto , a professor of meteorology at the University of Tokyo. Warm winds from the south and moist air from the sea also make Tokyo, which is in the eastern part of Japan, extremely humid.

Next year's Olympics are timed for the hottest days of the summer, immediately after the rainy season.

"It's like sitting inside a big sauna bath for a solid two months after the rainy season ends," a longtime Tokyo resident named Robert Whiting wrote in an op-ed for The Japan Times in 2014, arguing against a July August bid.

Tokyo Olympic organizers are spending millions of dollars to make next summer's Games safe and comfortable for athletes, fans, workers and volunteers.

The ideas range from the sensible to the silly, all at a cost in yen or dignity, sometimes both.

Tents will be set up between subway stations and sports venues, with chairs and water misters. At outdoor events, organizers say they will hand out small fans, paper sun visors and bags of ice. Fans may be allowed to bring their own beverages into venues, 30 of which are outdoors, most unshaded.

The 26.2-mile marathon course is being resurfaced with a material called Perfect Cool that uses tiny ceramic beads meant to reflect heat. Researchers question whether any of these measures will bring much relief. The road resurfacing, for example, could reduce the surface temperature on sunny, sizzling days by 10 degrees Celsius – about 18 degrees Fahrenheit – but a government analysis found that at head height, there is virtually no cooling effect at all.

There There are no plans to use it anywhere else at the Olympics, such as the plazas where fans will gather or wait in lines.

Some outdoor events, like the marathon, will start at dawn in an attempt to beat the day's heat and humidity. A similar strategy was employed at the recent track and field world championships in Doha, where 40 percent of the women's field dropped out of a stifling marathon that started at midnight. The 16-day Olympic schedule has wiggle room in case events are postponed because of heat – or wind and rain from typhoons, a secondary concern for planners.

Test events this past summer provided a possible preview. In a triathlon in August, the women's running portion was halved because of dangerous heat. Athletes were treated for heat-related problems at beach volleyball and rowing, too.

Concerns extend beyond the athletes to the millions of fans, many unaccustomed to summers in Tokyo, and the thousands of volunteers – about a third expected to be 50 or older, organizers said – and other staff. This past summer, a 50-year-old construction worker was found unconscious near the site of the Games media center. His death was attributed to heatstroke.

Figuring out how much more money Tokyo organizers will spend trying to cool down a midsummer Olympics rather than staging them in the spring or fall is difficult because of various jurisdictions involved. But the Tokyo Metropolitan Government said it is spending about two billion yen – about $ 18.7 million – to install spectator tents and other cooling measures.

At a canoeing test event in early September, organizers pelted spectators with fake snow meant to feel like soft flakes. The result was more like shards of shaved ice that left people soaked in a matter of minutes.

Officials have also proposed that Tokyo shopkeepers keep doors open to let the air-conditioning out.

All of this could have been avoided had Tokyo proposed, and been allowed, to hold the 2020 Summer Olympics in a month like October. Thursday's forecast called for clear skies and a high of 76 degrees (though a late-season typhoon was threatening). Mexico City in 1968 and Seoul in 1988 hosted the Summer Games in October, too.

Then came the Sydney Games and its relatively skimpy television audience. Since then the Summer Olympics have been held between July 15 and Aug. 31, as will Paris in 2024 and Los Angeles in 2028.

"It is wise for those bidding for the Games to stay within those rules," one Olympic-bid consultant said, echoing the advice of other experts.

Doha tried to test the rules, and failed. Will anyone else? Brisbane, Australia, is an early contender for the 2032 Summer Olympics, though officials have not yet proposed dates.

Climate change is eliminating several potential host cities for the Winter Games, but even cities that were once viable Summer Olympic hosts may find themselves increasingly unfit.

In the decade of August in Tokyo before the 1964 Summer Games, the average daily temperature was 26.6 degrees Celsius, or 79.9 degrees Fahrenheit, according to Japan Meteorological Agency.

In the past August 10 in Tokyo, the average daily temperature was 28.0 degrees Celsius, or 82.4 degrees Fahrenheit.

"Because of climate change, we may have to look into the overall calendar and whether there needs to be a shift," Bach said.

Nobody else comes close to generating those revenues for the Olympic committee. They are roughly twice as much as television rights from Europe, and three times as much as from Asia.

The ultimate decision, of course, rests with the Olympic committee. And there are other viable reasons midsummer makes sense. Summer vacation schedules help staff armies of volunteers and relieve pressure on public transportation systems. Next year's Olympics overlap with a popular holiday period in Japan.

Underpinning all that, however, is the IOC's own charter, where Rule 48 requires the committee “to ensure full coverage by the different media and the widest possible audience. ”

In the throes of next summer's expected heat, some might recall that in October 1964, the last time the Summer Olympics were held in Tokyo, the weather was cold and wet. People complained about that, too. But nobody died from it.