TIFF 2019 Review: A BEAUTIFUL DAY IN THE NEIGHBORHOOD Want You To Feel Loved 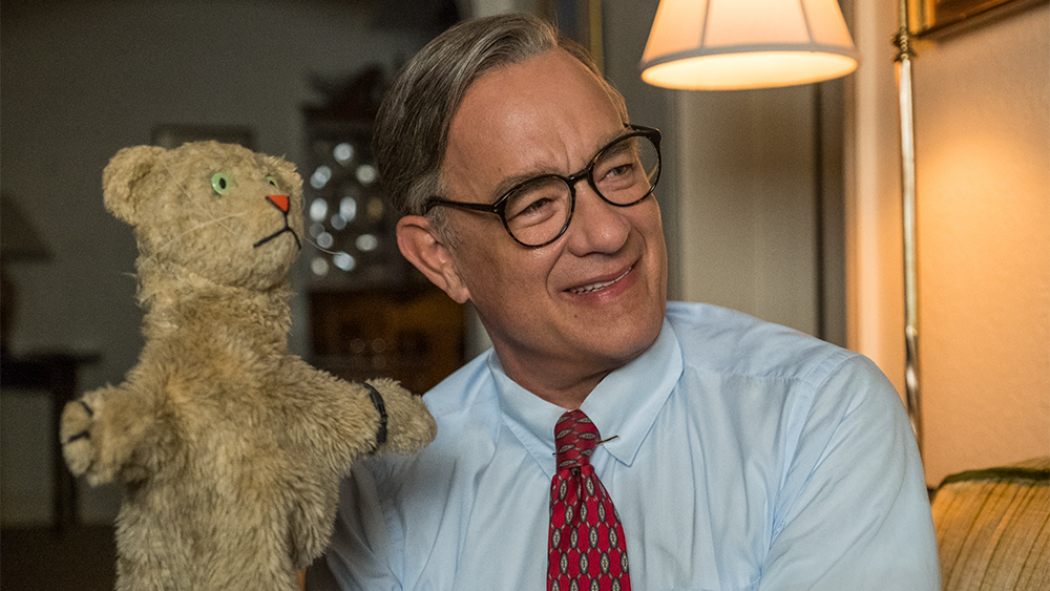 A Beautiful Day in the Neighborhood has to be great. It could have settled for fine. After all, this is a movie about Mister Rogers, one of America's most beloved public figures, in which Mister Rogers is played by Tom Hanks, one of America's most beloved actors. The bar for enjoyment was pretty low. A mild biopic, while definitely not exciting, would have been enough to attract large audiences and awards attention.

But, of course, when you hire Marielle Heller to direct a character-based movie about empathy, you're not going to get "fine." You're going to get much more. A Beautiful Day in the Neighborhood delivers the touching beats you expect from a movie featuring Fred Rogers, modern-day saint and spiritual guardian of millions of heartfelt tears. However, it does so using a more creative framework than you might expect, and has genuine curiosity about Rogers. The movie does not try to make him knowable — in fact it ultimately decides that he is unknowable — but it does make a strong case for the everyday kindness and deep selflessness he exhibited.

The main character of A Beautiful Day in the Neighborhood is not Fred Rogers, but Lloyd Vogel (Matthew Rhys), an investigative reporter for Esquire who has been assigned to Rogers profile for an issue on heroes. Lloyd is a new father but still has major issues with his own dad (Chris Cooper) who have kept him from fully engaging with his family. Lloyd's time spent with Rogers, based on the real-life relationship between Rogers and writer Tom Junod, eventually grows into a true friendship. Rogers helps Lloyd embrace emotional vulnerability and forgive his dad for the wrongs he caused to him and his sister Lorraine (Tammy Blanchard).

This is not just a clichéd story of a magical kind of person helping a jaded journalist regain his humanity (but again, even if it were, A Beautiful Day in the Neighborhood would still manage to be perfectly fine). Heller and screenwriters Micah Fitzerman-Blue and Noah Harpster want the audience to actively experience Rogers' kindness the way Lloyd does. To achieve this, Heller presents Lloyd's story in the context of an episode of Mister Rogers' Neighborhood with Rogers sitting down and introducing us to his friend Lloyd through a conversation about anger and forgiveness. B-roll and montages are often shown using the aesthetics of the show — model cars crossing a highway, or toy planes flying through the sky, or a magazine printing montage presented as one of the show's trademark factory visit videos.

wall breaks also bring us the film's most powerful moment (and the one that kicked off a chorus of sniffles at my Toronto screening which lasted the rest of runtime). Lloyd visits Rogers at a particularly low moment for him. As the two men sit together at a Chinese restaurant, Rogers asks Lloyd to think about all the people in his life who “loved you in existence.” But he just didn't ask Lloyd. Hanks delivers this line looking directly into the camera, at us . He wants us to do this exercise, too, leaving about 30 seconds of silence for us to think before speaking again.

Moments like this help the film capture the essence of what made Fred Rogers, and Mister Rogers' Neighborhood such a force for good. Through his show, and the tender, personal way he addressed his audience in each episode, Rogers was able to love his viewers both individually and corporately. He helped us feel seen as individuals, and we were not alone in our feelings.

As Rogers, Hanks also captures the essence of the man playing, without feeling like just doing an imitation. He does his best to reflect Rogers' speech and mannerisms, of course, but he also feels like a true character that the film regards with healthy curiosity as much as respect. Hanks' Rogers is honest about times faced challenges or had to deal with anger or frustration. But also so focused on others that it is often hard to tell at a given moment how the master of helping us deal with emotions is feeling himself. This is a flaw as much as it is a mystery that Heller knows her film will be able to fully solve. It's just something we're going to have to sit down with.

A Beautiful Day in the Neighborhood is a gentle film that avoids a lot of biopic clichés by doing something more movies of its type should try: exploring a public figure not through the details of their lives, but how they made us feel. Heller, who loves a good character portrait, is still very interested in Rogers as a person, but seems to know this is the part of his legacy that actually matters. She does this by using Rogers' approach to telling the movie's story, both in its nostalgic aesthetics and in the simultaneously personal and universal way the movie gets viewers to engage with it emotionally. Through his relationship with Lloyd, Fred Rogers still manages, in some small, partially fictionalized way, to love the rest of us, too.