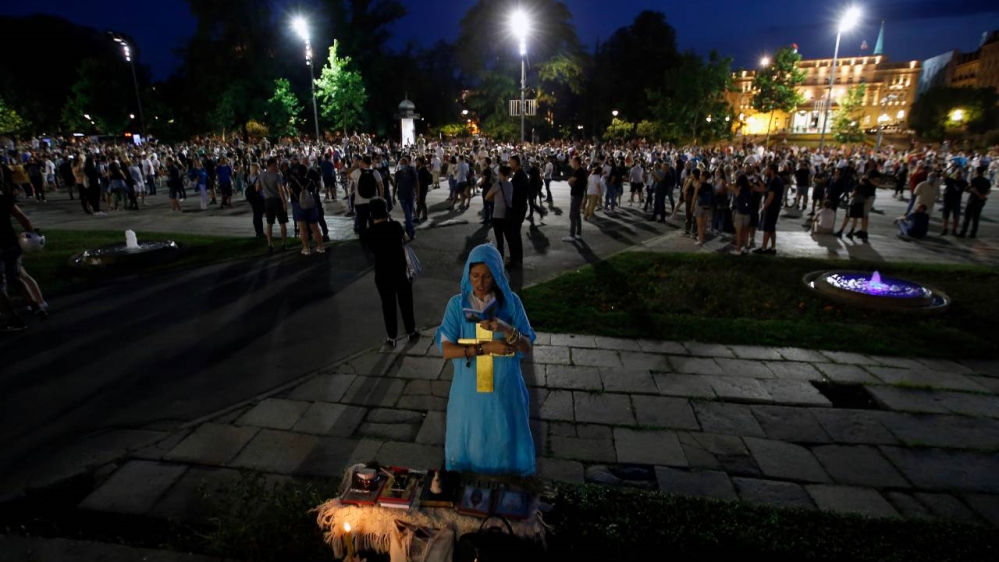 Several thousand people gathered in front of the Serbian Parliament building in Belgrade on Saturday for a fifth night in a row of government policy protests, including measures to contain the new coronavirus outbreak.

Protesters, most of whom wore masks, walked in front of the parliament building in the Serbian capital and sometimes called on President Aleksandar Vucic to resign.

“We hope the authorities will hear us,” said Stefana Radjenovic, one of the protesters.

“We want the authorities to stop lying to us and we want to know the whole truth about everything that has happened in connection with the coronavirus epidemic.”

Similar peaceful protests were held in the cities of Novi Sad, Zrenjanin, Cacak and Nis.

This week’s demonstrations were initially driven by frustration over financially stifling measures to contain the spread of the new corona virus, but soon evolved into anti-registration meetings that demanded Vucic’s departure.

Critics say the government’s decision to allow football matches, religious festivities, parties and private gatherings to resume in May and the June 21 parliamentary elections are to blame for an increase in infections.

Many believe that the government played down the outbreak to allow elections to continue.

Vucic rejected these claims, describing the protests as “pointless.”

Serbia, a country with seven million, has so far reported 18,073 confirmed cases of COVID-19, the airways caused by the coronavirus and 382 deaths.

It is the first country in Europe to hold elections since the pandemic was declared. A number of opposition parties boycotted the vote to protest Vucic’s control of the media, which they said did not give them enough coverage. Vucic rejected these claims.

Biden in the debate collides with Harris: “I do not agree.”