5 in the midst of coronavirus.

Passengers and crews – apart from the crew needed to power the ship – on board SeaDream I are quarantined on board after a passenger from a previous voyage tested positive for COVID-19, the SeaDream Yacht Club announced in a statement on its website on Wednesday.

SeaDream informed current passengers and crew on Wednesday that a passenger tested positive after returning home to Denmark after disembarking from SeaDream I in Tromsø, Norway on Sunday.

The ship, which has the capacity to hold up to 112 passengers, according to CruiseMapper, was on a later voyage when the test results emerged. That trip has since been canceled and SeaDream I is on its way to Bodø, Norway, according to the statement.

“We really hope that there is no COVID-19 on board, and we do not know of any other guests or crews who are infected or have any symptoms, but we are taking all necessary precautions,” the line said in a statement. “All guests and crews were informed as well as the Norwegian Institute of Public Health (NIPH) and the Norwegian Directorate of Health as soon as we received the information this afternoon.”

The cruise line is contacting passengers who had been on board the affected voyage that ended on 2 August.

Most of the global cruise industry remains on hiatus as coronavirus continues to sweep the world, but some cruise lines have begun to resume operations in international waters. And while ships are sailing with new precautions, problems due to the new coronavirus, which causes COVID-19, are already on the rise.

At least 45 people who were on board Hurtigruten’s MS Roald Amundsen cruise ship have tested positive for COVID-19.

Passengers from two separate voyages on the ship had already started on July 24 and on Friday to begin their journeys home before the cruise line contacted passengers about the first COVID-19 cases.

CEO of Hurtigruten Daniel Skjeldam said that the cruise failed and made a mistake in a statement on Monday. They thought the line was well prepared in the midst of the coronavirus pandemic, but a preliminary review of what happened on MS Roald Amundsen shows deviations from their established procedures. 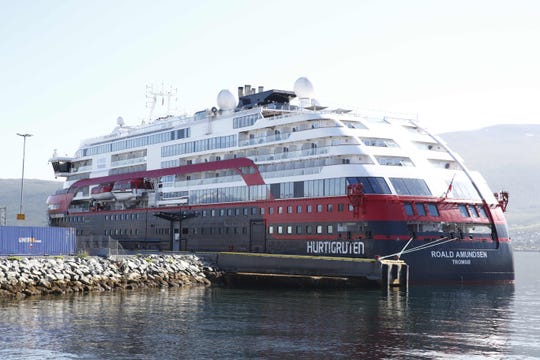 The Hurtigruten ship Roald Amundsen will be moored on 3 August 2020 in Breivika, in Tromsø, northern Norway, following an outbreak of the new coronavirus (COVID-19) on board the ship. (Photo: TERJE PEDERSEN, NTB Scanpix / AFP via Getty Images)

The cruise company announced on Monday that it would shut down all expedition cruises even if its coastal operations have not been affected.

Skjeldam said in a statement that the decision was the only responsible choice until the company can be sure that it can carry out its cruises while meeting all standards from the government and the even stricter requirements that Hurtigruten has set for itself.

Skjeldam added: “To our guests, employees and everyone who loves Hurtigruten, I want to apologize for this.” The company will make a complete external review of what happened, as well as look at procedures at Hurtigruten.

It is not clear how the MS Roald Amundsen outbreak began and passengers were from all over the world.

All 158 crew members on the ship were tested for COVID-19, according to the cruise ship. Four crew members are hospitalized at the University Hospital in Northern Norway, with three recovering and expected to be discharged soon

Since the cruise line often operates as a local ferry, traveling from port to port along Norway’s west coast, some passengers went out on the road and may have spread the virus to local communities. A total of 69 municipalities in Norway could have been affected, the Norwegian news agency NTB reported on Monday.

Two new cases were reported ashore according to the city of Trondheim and say that both had been passengers on the ship. Trondheim is located about halfway to Tromsø, north of the Arctic Circle, where the empty ship is docked.

Earlier: As cruises resume in some parts of the world, several cruise ships are affected by new COVID-19 cases

The Hurtigruten cruise line was one of the first companies to resume sailing during the pandemic, starting cruises to Norway from northern Germany in June with a single ship and then adding cruises in July to the Arctic archipelago Svalbard which is part of the Scandinavian country.

The leading industry association Cruise Lines International Association will eventually release a mandatory policy on how to deal with the prevention and outbreak of COVID-19 on board ships. But right now, its cruise members use company-specific protocols based on advice from governments, health authorities and experts.

“Resumption is extremely limited so far, and sailings that take place must comply with the requirements and approval conditions of national authorities,” Bari Golin-Blaugrund, senior director of strategic communications, USA TODAY.

After a 22-year-old American woman tested positive for the coronary virus aboard a cruise ship in Tahiti, all other passengers and crews aboard the MS Paul Gauguin tested negative and some began boarding to enter a seven-day quarantine, the cruise ship announced Tuesday. .

The infected passenger, who was asymptomatic, was housed in a special cabin before going with his mother to a hotel to remain in isolation offshore, according to a statement from the Paul Gauguin cruise line shared with the United States today by spokeswoman Lauren Wintemberg.

Following the discovery of the infection, the 340 passengers and crew on board the MS Paul Gauguin, the cruise ship’s flagship, underwent tests and were confined to their cabins awaiting results. 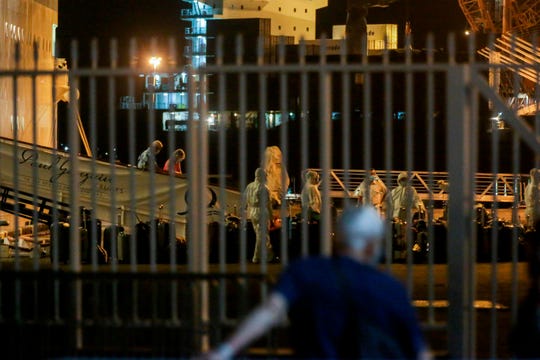 Passengers board the cruise ship Paul Gauguin assisted by ground personnel carrying protective equipment in the port of Papeete, Tahiti, in French Polynesia on August 3, 2020 after a case of a new coronavirus (COVID-19) was discovered on board. (Photo: SULIANE FAVENNEC, AFP via Getty Images)

The ship returned Sunday morning to the port of departure in Papeete, the capital of French Polynesia on the island of Tahiti, it is said, where they began seven days in quarantine and before undergoing new tests.

All foreign passengers were required to take two tests before boarding the Gauguin, according to the cruise ship. The first was made within three days of an international flight and a second was administered four days after arrival in French Polynesia. 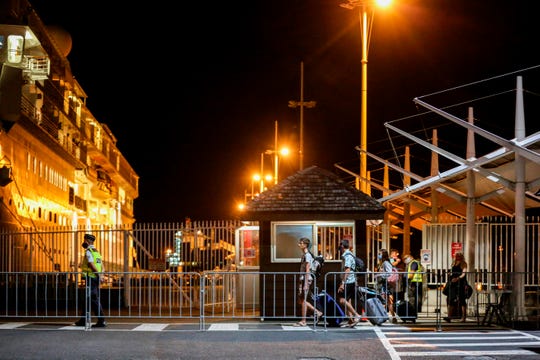 Passengers board the cruise ship Paul Gauguin moored in Papetee’s port, Tahiti, in French Polynesia on August 3, 2020 after a case of new coronavirus (COVID-19) was discovered on board. (Photo: SULIANE FAVENNEC, AFP via Getty Images)

Crew members can be quarantined on board for one week. All passengers and crews who have been on the ship will be required to be reconsidered within a week, according to the crew members, stated in a statement from the cruise line that was shared with the United States TODAY by spokeswoman Lauren Wintemberg.

French Polynesia opened last month for visitors but requires them to take a test before entry and again four days after arrival.

Hurtigruten’s expedition cruise MS Fridtjof Nansen announced on Monday that four crew members had been isolated on the ship after reporting mild cold symptoms. These crew members all tested negative for COVID-19.

The entire crew received coronavirus tests, the first of which was delivered ashore on Tuesday for analysis in Ålesund, Norway, said press manager Øystein Knoph in a news release from the cruise ship. Guests are offered and encouraged to be tested and have been asked to stay in their cabins for the time being, Knoph added.

The two-week round trip cruise from Hamburg travels along the Norwegian coast and is currently approaching Ålesund. It has 171 passengers and 162 crews on board.

MS Spitsbergen has no suspicious cases, plans to test everyone

MS Spitsbergen, another cruise ship for expedition in Hurtigruten’s fleet, has no suspected cases of coronavirus but plans to test each person on board, Knoph said in the publication.

The ship is expected to dock on Thursday in Tromsø, Norway, where all passengers and crew will stay on board until they test negative. Knoph stressed taking all necessary precautions despite the lack of reason to believe that there were any cases of the virus on the ship.

The ship was to receive test equipment on Monday but fog blocked the plane with the equipment from landing.

If you missed: When cruise resumes in some parts of the world, several cruise ships are affected by new COVID-19 cases

And this too: AIDA Cruises suspends sailing on August 3 after expected restart in the middle of the COVID-19 pandemic