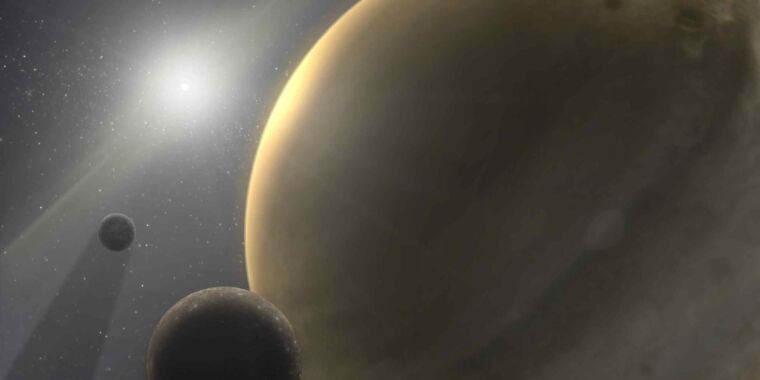 In 2018, researchers who monitored TESS ̵

1; the transiting exoplanet satellite – discovered a giant planet in orbit around the star TOI-849, about 735 light years away. Nature recently published an article from scientists at the Center for Exoplanets and Habitability that describes this planet in detail.

TOI-849b is about 40 times the mass of the earth, which would normally indicate a gas giant that weighs somewhere between Saturn and Neptune. Still, its radius is smaller than Neptune’s, although it has more than double Neptune’s mass. Since it is difficult to see how it can happen in a gaseous world, the researchers suggest that the planet may once have been a gas giant, which has now been scaled back almost to its fixed core. The alternative is that it may have been formed in a very unusual way that made it possible to avoid collecting much gas in the first place.

The TOI-849bs host star is a late G-class yellow dwarf, a little cooler and about 2 billion years older than our sun, with about nine tenths of its mass and radius. TOI-849b is very close to the host – its orbital period is just over 18 hours. This means that the longest distance from the star is only 0.02 astronomical units (the typical distance between the earth and our sun). As a reference, our own Mercury orbits the sun almost 20 times more distance, almost 0.4 AU.

The radius, mass and period of the TOI-849b place it firmly in a zone called the “hot Neptune Desert” – an orbital region where physics is such that large planets appear very rarely formed. The rarity of planets with large mass and near orbital times is likely due to a combination of two processes driven by the star: photo evaporation and tidal disturbance. Photo evaporation is the ionization of gases and particles from intense radiation, causing their scattering; tidal force is the difference between the gravitational force on the near and far sides of the mass, which causes a stretching effect.

Factors that lead to TOI-849b’s own largely missing gas envelope may contain anything that adds enough energy to spread the atmosphere back into space. This means all combinations of planetary collision, tidal disturbance and photo evaporation. Alternatively, it could have just formed at a time when there was very little gas present, perhaps due to a planetary formation relatively late in its star’s life or from a gap in the protoplanetary disk largely devoid of gases.

Although we do not yet know the details of TOI-849b’s unusual formation and history, its discovery astrophysicists offer fascinating clues about planetary mechanics and new insights into the likely composition of gas giant cores.