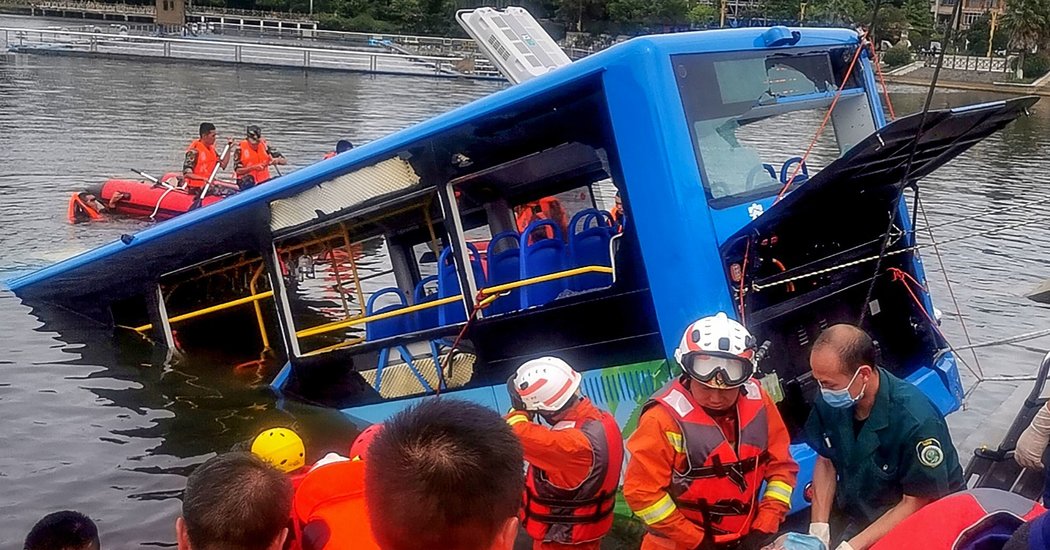 A bus crash in southwest China last week that killed 21 people and injured 15 others was caused by the driver, who deliberately steered into a reservoir because he was angry at the demolition of his home, police say.

The crash on Tuesday, which also killed the driver, pulled out of grief. some of the passengers included students traveling to take China’s notoriously difficult college program.

Anshun police, a city in Guizhou province, said in a statement on Sunday that the 52-year-old driver, identified only by his last name, Zhang, had been annoyed at the demolition of his home that morning. The driver crashed the passenger bus, police said, to send a message.

“Because of his dissatisfaction with his living conditions and the demolition of rented public housing and to cause a movement, he has committed extreme crimes that jeopardize public safety,” the police report says.

Authorities said the driver had rented a 430-square-foot unit in a state property building that is part of a redevelopment system. He signed an agreement in June to receive $ 10,000 in compensation, but did not demand the sum. His applications for public housing were rejected, but plans for demolishing the building went ahead.

On Tuesday morning, the bus driver called a government hotel to complain that his home would be demolished before he could get state housing, the police report says.

He then traded shifts with a colleague and bought some baijiu, a colorless alcoholic beverage, which he took to work in a water bottle. He left some voicemail messages for his girlfriend on WeChat, expressing fatigue and disgust at the world and sipped from the bottle before beginning his shift, according to the police report.

Security video showed the bus cutting across three lanes of oncoming traffic around noon Tuesday as it traveled along Hongshan Lake in Anshun. It then plunged into a series of low terraces and into the lake and was submerged by more than 30 feet of water.

Some passengers were students preparing to take Gaokao, the national college test, reported The Paper, a state-run online publication based in Shanghai. At least five of those killed were students, officials say.

Gaokao, which began on Tuesday, was delayed for a month due to the coronavirus pandemic. More than 10 million students attend this year.

Caixin, a Chinese-language newspaper, on Friday published an article about the demolition of the bus driver’s home and his efforts to stop it. The story, which aroused sympathy for the working-class residents displaced by urban development projects in China, was later taken offline.

The government authorities in Anshun said in a statement on Sunday that they would investigate the demolition and any mistakes made in the process.

Austin Ramzy contributed with the reporting.