Breaking News
Home / US / The Blasio's Back: Here Are 6 Major Problems with Facing

The Blasio's Back: Here Are 6 Major Problems with Facing 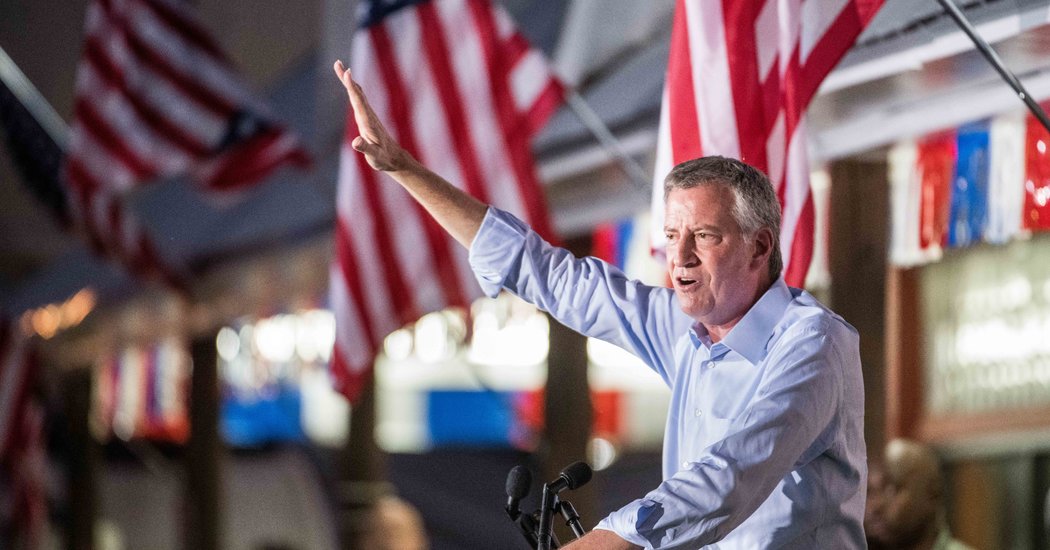 [Readmoreabout the mayor's decision on Friday to end his bid for the Oval Office.]

After five months of a presidential campaign that generated more shrugs than buzz, Mayor Bill de Blasio announced on Friday that he would end his candidacy and focus on his full-time job running New York City.

The clock is running out on Mr. de Blasio's time in office – term limits prevented him from running for re-election in 2021. As he ventured out on the campaign trail, some New Yorkers complained that their lame-duck mayor's attention often seemed focused elsewhere.

But as Mr . de Blasio returns to New York, he still has more than two more years in office to build on the progressive track record he promoted in states far from Gracie Mansion and tackle problems confronting his constituents.

Here are some of the most prominent issues that await Mr. de Blasio.

The mayor was frequently criticized at the national stage for his handling of policing in the city, from criminal justice reform advocates and officers themselves.

As he returns full-time to City Hall, Mr. de Blasio will need to address a restless rank and file.

Central among them: a number of recent suicides that have left the Police Department reeling. Officials want Mr. de Blasio to push through a proposed bill that would direct the department to make more mental-health resources available to officers.

Throughout his presidential bid, Mr. de Blasio was criticized for his handling of the case involving Daniel Pantaleo, the police officer whose chokehold led to Eric Garner's death in 2014.

When Mr. de Blasio declined to support calls for firing Mr. Pantaleo, the mayor was criticized for failing to take responsibility after he said he would let the disciplinary process play out.

The mayor sought to anchor his brief campaign with the city's universal prekindergarten program, his signature and arguably most successful initiative.

But while Mr. de Blasio traversed the country, the conversation at home began to test the limits of his willingness to tackle inequality.

A simmering conversation about desegregation boiled over, and a mayor who pledged to "shake the foundations" of the nation's largest public school system has instead watched activists on the left and his own schools chancellor, Richard A. Carranza, call for more sweeping – and polarizing – changes than Mr. de Blasio appeared willing to support.

A panel the mayor commissioned recommended eliminating gifted programs, along with selective admissions policies for some middle and high schools, and instead creating more magnet schools and enrichment programs.

A debate over that proposal is sure to dominate the conversation, but Mr. de Blasio said he will not make any decisions about it this year.

The mayor also has not announced a replacement for his $ 773 million school improvement program, known as Renewal, which did not achieve the results that had been promised. Education officials said there may be no replacement, which is sure to prompt questions about how Mr. de Blasio intends to help students mired in low-performing schools. – Eliza Shapiro

For years, Mr. de Blasio and New York's governor, Andrew M. Cuomo, have been at odds over who should take responsibility for the problems afflicting the city's aging transit system.

Officials at the Metropolitan Transportation Authority called on the mayor this week to help fund the agency's ambitious $ 54 billion plan to fix the subway. They want him to write a check for $ 3 billion to pay for new elevators at 70 stations to improve accessibility .

New York City's taxi industry is also in crisis, especially after a spate of driver suicides. Mr. de Blasio and the City Council are deciding whether to assist the hundreds of taxi drivers who have faced bankruptcy, as well as the city profiting from the sale of taxi medallions, the permit required to operate a cab.

Mr. de Blasio must pick a new leader for the Taxi and Limousine Commission, the agency that oversees the industry. But he recently withdrew his nominee after the Council objected to his pick. – Emma G. Fitzsimmons

Mr. de Blasio has struggled to respond to a growing street safety crisis in the city, and there is a sense that his signature policy to reduce traffic fatalities is faltering.

The policy, known as Vision Zero, aims to eliminate traffic Deaths by 2024. But bicyclist deaths are up this year, and there have been a series of high-profile crashes in the city.

Two children were killed this month, including a baby in a stroller who died after a driver jumped the curb in the Bronx.

After the baby's death, transit advocates urged Mr. de Blasio to show that he cared.

“This crash represents a chance for Mayor de Blasio to demonstrate real Vision Zero leadership: Go to the scene of the crash, stand with the child's family, and tell New Yorkers that he will do whatever it takes, right now and for the remainder of his time in office, to bring an end to the carnage, ”the Transportation Alternatives group said in a statement. – Emma G. Fitzsimmons

Mr. de Blasio faces an uphill battle around living conditions in the nation's largest public housing system, which is home to one in 14 city residents.

The situation grew so dire that the federal government threatened to take over the agency and intervened earlier this year, appointing an independent monitor to supervise the agency, known as NYCHA.

But the city recently admitted it was still not in compliance with a number of federal regulations, including lead paint rules meant to protect young children. de Blasio's contentious plan to raise money for repairs by partnering with developers to build mixed-income housing on underutilized NYCHA land, like parking lots, has largely stalled. – Luis Ferré-Sadurní

The city has nearly 79,000 people who are homeless, including an estimated five percent who are living on the street and sleeping in parks and subway cars.

His plan to open 90 new shelters over five years has fallen considerably short. The administration has been slowed by neighborhood opposition and, in some cases, lawsuits.

Only 26 new shelters have opened, leaving thousands of New Yorkers in hotel rooms and private apartments that the city is using as shelters.

Advocates for homeless and low-income people say the solution is housing, but Mr. de Blasio has resisted calls to change his housing plan to better target the city's most vulnerable households.

Last year, Nathylin Flowers Adesegun, a 73-year-old woman who is homeless, interrupted one of Mr. de Blasio's regular morning workouts at the Park Slope YMCA to urge him to build more housing to get people out of shelter.

"The mayor has been really stubborn about this, really ignoring the fact that the housing crisis is concentrated especially among people who are literally homeless and low-income New Yorkers," said Giselle Routhier, policy director at the Coalition for the Homeless. – Nikita Stewart