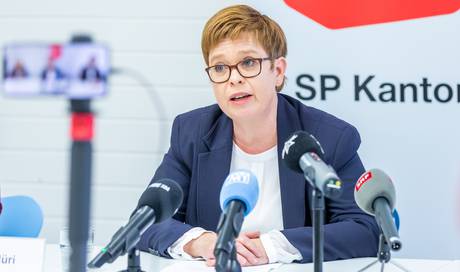 For three days, Ruth Müri has been a carrier of hope for the red-green camp in Aargau. After leaving the SP candidate Cédric Wermuth, the green councilor is the only left candidate in the second council. AZ meets them at Kulturcafé in Baden, where Müri likes to have a cup of coffee.

Would you have expected at the election on Sunday that you would stand for the Cabinet on Tuesday as a joint candidate for the SP and the Green?

Ruth Müri: I was already happy. But it was clear from the beginning that we wanted to analyze the results together and discuss the way forward. We held talks from Sunday evening to Tuesday afternoon, when the decision was made ̵

1; such a process takes some time.

Cédric Wermuth said at the press conference Tuesday that his resignation was his personal decision. Does it also apply to you, if you could have said, "I do not want to participate, I do not see a chance"?

Of course I could have said no, but not with this good result. In addition, it is obvious to me that if you stand up for the first vote you are also ready to go for the second round.

In the first vote you have achieved a good 40,000 votes, SVP candidate Hansjörg Knecht 2nd place: good 72,000 – how are you going to catch this huge gap?

That's the big challenge now. My chances are good, but for example, GLP has decided to support me. I am convinced that there are many voters who do not want a purely bourgeois vote, but a balanced representation of the canton in Stöckli.

In my opinion, it needs a mix of more conservative and more progressive forces. I am convinced that it is possible that I have the chance to be elected to the first green from Aargau in the Cabinet.

SVP and FDP together have 45 percent of voters. The green, SP and GLP together make up 35 percent. Marianne Binder from CVP runs in the middle – where do you want to get the necessary votes?

I think many voters do not decide on the basis of party affiliation. There are also many who call themselves party independent. They simply want to send two people to Bern, where they feel they represent Aargau well there. I would like to offer voters a progressive alternative to two right-wing men.

You told the media on Tuesday that Aargau would not be well represented with two right-wing men in the Cabinet – what would your desire be?

I am open to cooperation with all candidates elected to the Cabinet. As a municipal councilor in Baden, I am used to working with politicians from other parties.

An important goal is really to prevent a combination of Thierry Burkart and Hansjörg Knecht in Council of States. I like to perform with Marianne Binder, who I have known for a long time, in the election campaign.

If you and Binder were elected, there would be two women from the left center, so no balanced representation.

That's right, it wouldn't be balanced in terms of gender, rather on the positions. It may have to be another combination – but that's what voters decide on November 24.

What would be balanced – once male, once female, once civilian, once left?

Yes, we had that in the last eight years with Pascale Bruderer from SP and first Christine Egerszegi, then Philipp Müller from FDP. In my opinion, the whole of Aargau was well represented in the Cabinet.

Cédric Wermuth was the clear left candidate who wrote on Twitter that he would not change his political positions to enter the Cabinet. You appear more moderate, because an advisor is the woman who seeks majorities and alliances – are better relationships?

Many of Cédric Wermuth probably still have the image of the radical Juso president. But he has not been for a long time, this picture is outdated and is no longer true today. Still, I think conditions are better for me.

I am well known for politely politely, that it is very important to me and that I seek pragmatic and constructive majority solutions with all camps. I think, therefore, that I am also entitled to many people who do not call themselves left.

In the panacist votes of other party voters on the National Council's list you are about the same level with Hansjörg Knecht. You and he have roughly the same potential to win votes in the middle – that would not be enough for your choice.

That may be true when I look at these statistics – I'm still optimistic. My motto for the second round of voting is: It's a challenge, but I can win.

You expect the climate and women's choice to take you to Stöckli. You participated in the women's strike and on climate change – will that not make you unjustified to many bourgeois voters, but whose votes do you need?

I don't think so. The climate movement is basically politically neutral, it does not belong in the left corner. Young people are aware of a problem that is extremely busy for them. It is true that the parties include "green" in the name and SP with this topic. However, the Greens have been doing this for a long time, not just since the climate is hitting. Furthermore, climate change is clearly the biggest challenge for the future. The issue will affect us directly over the next few years and decades.

You have selected access points for a flight ticket – Cédric Wermuth has requested a ban on short-haul flights to destinations within ten hours by train. Would you also go that far?

If there are other meaningful means that make a difference, I am against prohibition. I'm just for a ban if that is clearly the best way to solve a problem. Two classic examples: the ban on lead gasoline and the introduction of the catalyst. The automotive industry has not declined because of this, but the positive effects on air quality have been enormous.

By what means do you want to reduce carbon dioxide emissions?

Prohibition is required in some areas – it really makes sense for new buildings to continue to install oil heaters. Basically, climate-damaging gases must get a price, it needs a CO2 tax. We need a cost recovery so that today's reductions – for example, very cheap transport – are eliminated. We are consuming too much today and are rolling out the consequences for future generations.

One year ago, in an interview with AZ, you said: "I have a completely different background than Cédric Wermuth. I am a political expert, have no reservations about the economy and take this background with me into my work." differences during the election campaign?

Maybe I need to emphasize these features in my profile even more, as they are part of my personality and my appearance. In Baden, for example, I was responsible for site marketing during the time and I also have good contacts with representatives of companies such as ABB and others. In this way, I am accepted as a reliable and competent interlocutor.

In the election campaign you are supported by the Social Democrats and the Green Liberals. Before
one year you said that SP was partly too dogmatic for you, that GLP was a bourgeois party that supported educational reductions …

I still stand by these statements today, and I do not always agree with SP or GLP in Big Council, In important positions we agree, and that is what is important. You take the biggest common denominator, and I work with this principle. And these intersections are also found in some areas with FDP and CVP.

You are a geographer, you have worked for Zürcher Kantonalbank, you are a board member of KV Baden – this can be a civil profile. How did you even get to the greens?

Cédric Wermuth said he will now make his promotional machines available to you. Is it that easy?

No, of course you cannot just replace the name Cédric Wermuth with Ruth Müri on your flyers or in your mailings. But he led a very impressive election campaign and we will certainly be able to use some instruments. I am sure that I will also travel extensively with Yvonne Feri, who participates for the Government Council as a joint candidate for the SP and the Greens.

SVP President Thomas Burgherr said in "TalkTäglich" by Tele M1 that they are completely unknown in the Bundesbern and are not affiliated. As an executive politician with many years of experience in politics, I have an optimal profile. With the education network Baden, where the business community, education providers and the public sector exchange ideas and develop projects together, I have shown that I am a good networker.