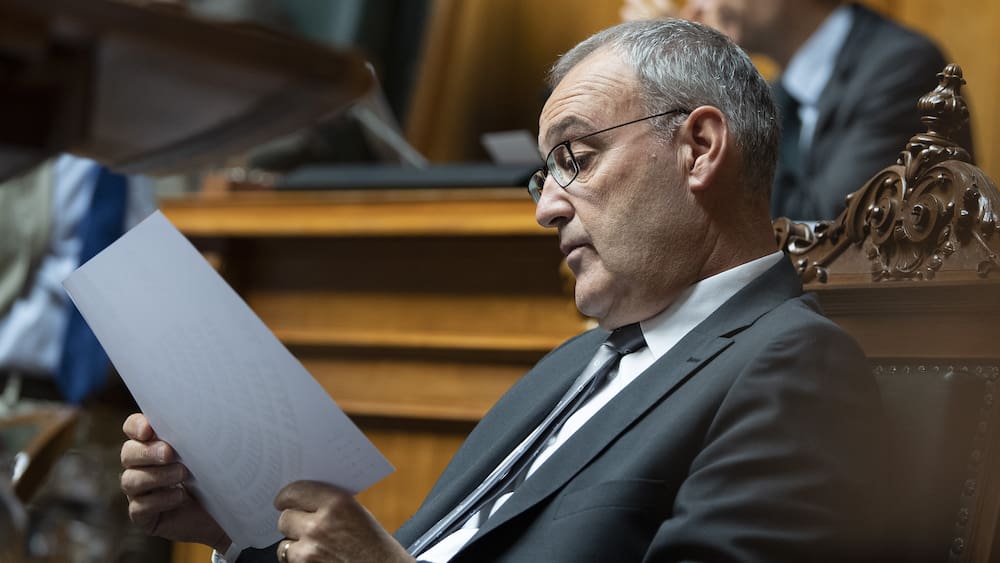 The water experts don't talk about the bush for long. "There is a need for action!" Is the beginning of a four-page fact sheet by Eawag, ETH's water research institute. Research shows that the use of pesticides in agriculture jeopardizes water quality in Switzerland. "Negative effects on reproduction, development and health of plants, animals and microorganisms must be feared."

This statement is explosive – especially given the ongoing popular initiatives that severely limit the use of pesticides or ban them altogether. However, according to Federal Council Member Guy Parmelins (60), the public should not learn anything about it.

BLICK research shows that the Minister of Agriculture himself has ensured that the fact sheet Eawag remains under wraps. And he missed the ETH researchers a nozzle. For Parmelin, the newspaper, which was originally created for Parliament, sees a political influence.

This despite the fact that the researchers explicitly say that as an independent research center, there is no voting recommendation for the initiatives. "Whether, where and how the two initiatives would lead to improvements in water and water quality is difficult to assess with today's state of knowledge," it says at the end of the document.

Previous actions are not enough

However, it is clear from the researchers' point of view that what Switzerland has done so far is not enough. The crop protection plan really includes a package of measures to reduce the pesticide load on waterways. But the plan of action is not binding, as Eawag claims. In addition, "even the set goals do not yet meet the legal requirements". The thesis indicates that it is mainly agriculture that damages water quality.

It was too much for the trained wine grower. Parmelin intervened in the ETH Board. This is the university's highest regulatory body, which is also responsible for Eawag. On October 10, the Minister of Finance, the Interim President of the ETH Board, Beth Krasna (66), Eawag Director Janet Hering (61) and other participants met for a debate. The research institute confirms the meeting, but does not want to comment on the content of the conversation.

BLICK knows that Parmelin was not included only because of the fact sheet. The SVP-Bundesrat also did not fit in a guest comment, which was published at the end of September in «NZZ». Bernhard Wehrli (62), professor of water chemistry at ETH and Eawag, criticized the Federal Council's previous pesticide strategy. He was even open to a counter-proposal on drinking water and pesticides.

Thus, the ETH professor attracted Parmelin's anger. BLICK has an internal memo that Eawag Director Hering sent well a week after the meeting. It is clear from this that Parmelin in the introduction emphasized respecting and appreciating Eawag's scientific independence. However, the memo also states that Parmelin made clear that he did not tolerate criticism of the Federal Council's policy. Literally: "Federal Councilor Parmelin explicitly stated his position that employees of the Swiss Confederation (including employees of the ETH domain) should not criticize public decisions made by the Federal Council." The note was approved by session participant Beth Krasna before it was sent to staff, This is also in memo.

Eawag's teeth gritted. Parmelin's intervention resulted in the fact sheet in the gift box being locked – and not, as is the case with comparable documents, published on the website. ETH researchers LOOK spoke to are upset by Parmelin's censorship. However, no one dares to publish it.

The Eawag Directorate plays Parmelin's involvement in the outside world. The fact sheet was just a "background document for Parliament", according to an official request. Inside, Hering criticized Parmelin's attitude.

The Department of Economic Affairs (WBF) dismisses the allegations of censorship and influence. "The presentation in the memo is wrong," WBF responds, emphasizing: "Researchers are always allowed to express their facts." Parmelin only "suggested in a confidential conversation" that cooperation and communication between Eawag, ETH and the department should be improved.

The Federal Council had "never issued a ban". The charges are "out in the air and completely absurd". The fact sheets would be "published accordingly on Eawag's website". But the controversial paper was not published until last night.

"Intervention in the freedom of science"

The statements in the Parmelin protocol trigger violent reactions not only among researchers but also under the Bundeshauskuppel. "I'm annoyed," says SP National Council Beat Jans (55). "Politicians rely on researchers to the best of their knowledge and belief to provide information about scientific findings and the need for action." That's exactly what Eawag did. "Parmelin's intervention is not at all."

Green Party leader Balthasar Glättli (47) agrees with him. "This is a disruption of the freedom of science," says the Zurich National Council. To objectively say that there is a need for action is not a political influence. "It should also be possible for a professor to comment on a topic that is politically relevant."

This is also emphasized by BDP President Martin Landolt (51), an opponent of the two initiatives. "Science must be allowed to express itself, especially ETH," says Glarner. "Your contributions are important and valuable."

Drinking water and pesticide initiatives cause great nervousness among the farmers. The Drinking Water Initiative wants only farmers to receive direct payments without chemical control of pests and excessive use of antibiotics. The pesticide initiative is even more radical and wants a complete ban on synthetic pesticides.

As the initiatives are thematically similar, it treats Parliament together. The Federal Council and the National Council both reject. Even a counter-proposal had no chance. Then comes the templates in the Cabinet. Given the green wave in the federal elections, it is quite possible that the wind will still turn. The vote will take place early next fall.

Not only because of the election results, the promoters have gained momentum. A report from the Federal Office for the Environment, published this summer, shows how strongly pesticides contaminate groundwater. At more than half of the measuring points, poison remains were detected. The main reason for this is agriculture.

The Beckenried School is filing a criminal complaint

“A sad day for the army”: recruits die during the performance march – Switzerland