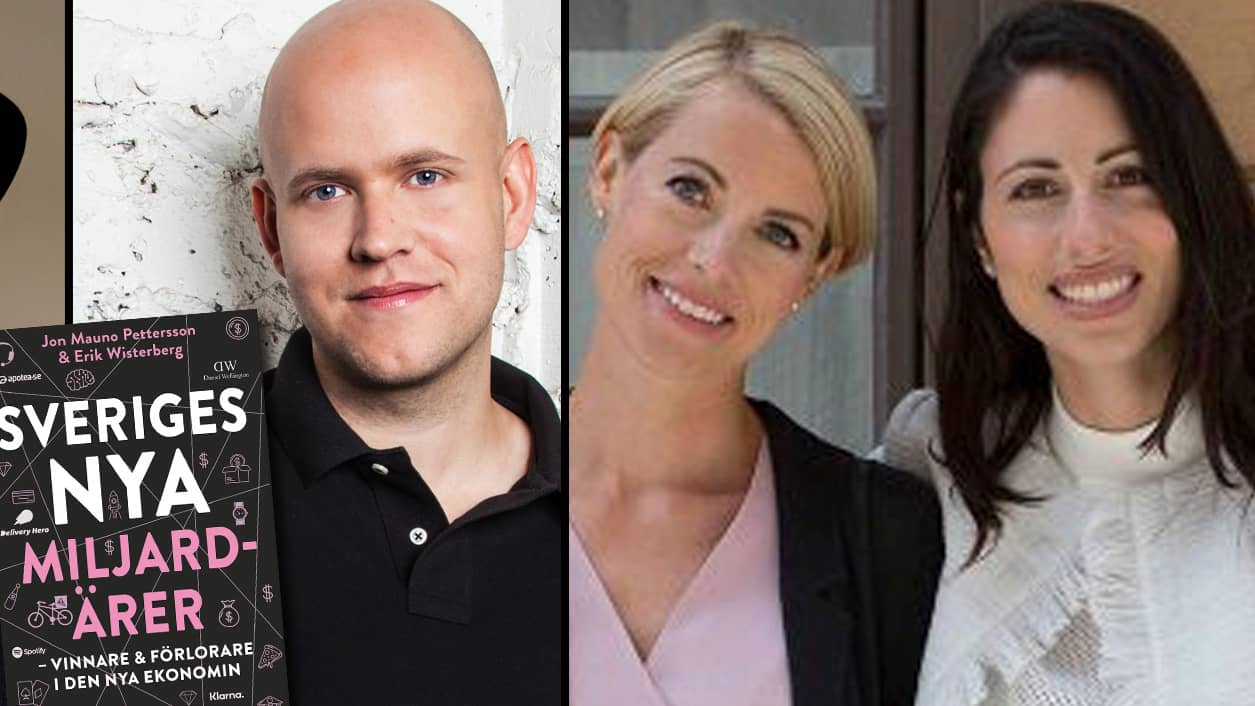 The number of billionaires in Sweden has doubled since 2008, from 98 to 191, according to the authors of the book on the tech billionaires.

Jon Mauno Pettersson and Erik Wisterberg are financial journalists at breakit.se and monitor the industry with the new generation of star entrepreneurs who In a relatively short space of time, they have earned enormous assets.

There is a lot in common among the people behind Spotity, Klarna, Izettle, Delivery Hero and several fast-growing companies.

– A common denominator is that they work hard, take great risks and are competitive. They think globally and aim to be the biggest in the world, "Jon Mauno Pettersson and Erik Wisterberg told Expressen.

The fact that character entrepreneurs are raised in Sweden with free schooling and early access to the Internet are also conditions that favor them.

of them come from wealthy entrepreneurial families with a tradition of entrepreneurship. Others, like Daniel Ek, grew up in simpler conditions and have started with two empty hands.

In his summer program, Ek told about his childhood in the Stockholm suburb Rågsved with his single mother and little brother. And the "plastic dad" who worked with computers and introduced the prospective Spotify founder in the digital world.

36-year-old Ek is today reported to be good for about SEK 20 billion. He is Sweden's 1

7th richest person according to Forbes and the companion Lorentzon is number 14.

So what is it that drives the Swedish tech wonder – in addition to the dream of luxury and financial independence?

– It is not just the dream of cashing in which is the driving force. Companies become their baby and they continue to work hard even after becoming a billionaire. The desire to change something, such as the music industry, is strong. At the same time, they have become incredibly rich in the cup.

Niklas Adalberth, who co-created Klarna Bank, says in the book that his idea of ​​what creates happiness burst in a Las Vegas hotel room.

to celebrate that he has built up a super company and become rich. He had reached the goal he had dreamed of at the School of Business. The richest win.

But Adalberth only felt emptiness as he sat in the luxury suite looking at his newly purchased clothes from swindle brands.

– It's a strong story where he sits and cries over his shopping bags, and then recharges for to find a new meaning with life, says Erik Wisterberg.

The Klarnam billionaire decided to invest a significant part of his capital in a philanthropic project in which he invests in companies that, for example, can help solve the climate crisis.

– He tries Save the world through business, states author Duon.

Here are the new star contractors

Pär Svärdsson, 49. Sometimes called the e-commerce king and is the man behind Adlibris and Apotea. Became wealthy when he sold Adlibris to Bonniers.

Markus "Notch" Persson, 40. Creator of the computer game Minecraft, which was sold to Microsoft for SEK 18 billion. For the money he bought, among other things, Hollywood's most expensive villa after bidding war against the artists Beyoncé and Jay Z. Price: SEK 500 million.

Stina Erhenswaard, 52. American-Swedish entrepreneur who runs IT security company Yubico. Something of a hidden ice cream, but the company is valued at several billion SEK. Recipient of KTH's grand prize 2016.

Cristina Stenbeck, 42. left Kinnevik's board. E-commerce giant Zalando, electric scooter company Voi and a bunch of small startups are among her nieces.

Daniel Ek, 36: Swedish innovator, entrepreneur and CEO in the IT industry. Best known for having founded the music service Spotify. Good for SEK 20 billion. Bought classic villa in Djursholm which is now to be demolished and rebuilt from the ground up.

Martin Lorentzon, 50: Founded and founded Spotify with money he earned on previous business with including online marketing company Tradedoubler. Member of the Board of Directors of Telia Sonera.

Niklas Adalberth, 38: Founded IT the company Klarna with fellow students Sebastian Siemiatkowski and Victor Jacobsson. Has said he is willing to put most of his billionaire wealth into the Norrsken Foundation in hopes of improving the world in different ways.

Jacob de Geer, 44. The Freelander from Upplands Väsby who created the payment service Izettle, which was then sold to American Paypal for almost SEK 20 billion.

When 1945 dawn Niklas decides to step up. He goes out among Las Vegas' exclusive stores and buys garments after garments – one more expensive than the other.

Still trying to push away the uneasy feeling of yesterday evening. Now with the help of comfort shopping in square. He rejoices in luxury consumption.

Once back in the hotel room, Niklas looks down at the bags on the glossy floor, marked with his flashy brands. They stare back at him, with a single message: Damn, how pathetic you are.

Thoughts fly through his head at him

He feels confused. That was the success he wanted – so why does he feel worse than ever?

There, with the shopping bags scattered on the shiny floor, it fails for the new entrepreneur. Niklas begins to cry, in a way that he has not done since he was a child.

Somewhere in Las Vegas came the realization that all that is not worth anything, "says Niklas Adalberth.

If everything you have fought for turns out to be an empty illusion, what do you do with your life?

Spotify 10 years – here are the milestones of the company:

The TV top: "Everything for Sweden" was seen by most – Culture & Entertainment