Sorting the Sunday Pile: Lamar Jackson is the truth, Aaron Rodgers ends any talk of demise 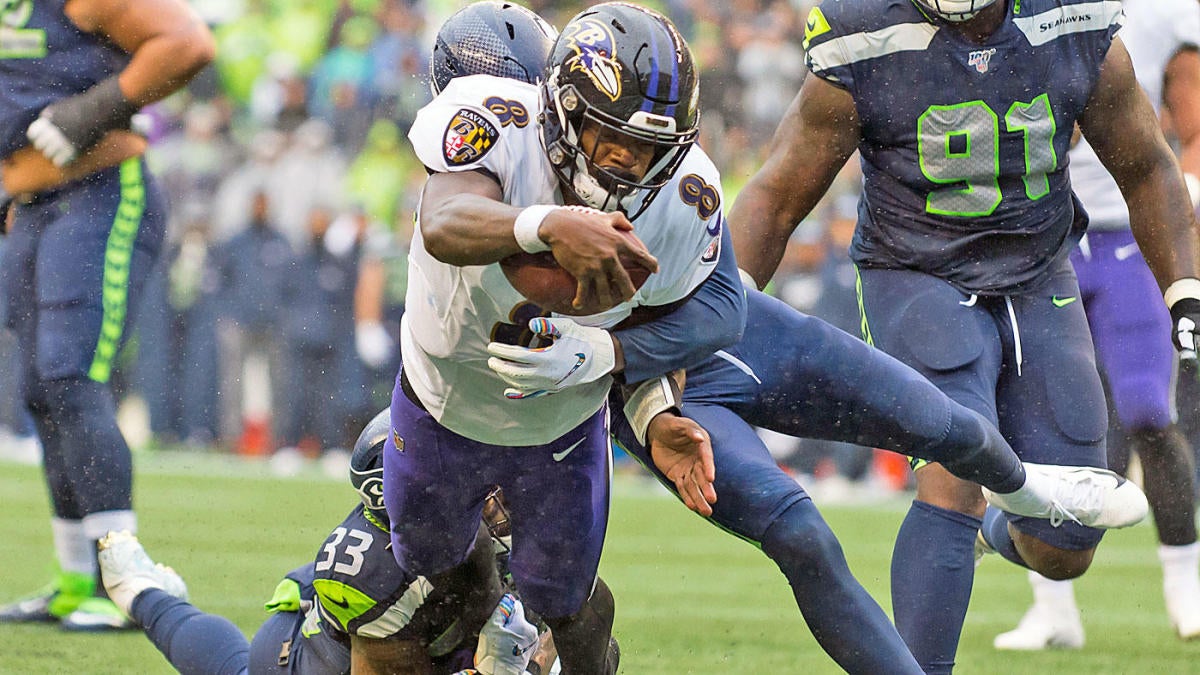 It's amazing to see how many people don't want to believe in Lamar Jackson. Are they watching the games? This kid is doing stuff we've rarely seen done on NFL fields. Jackson, who had 143 passing yards and 116 rushing yards in a 30-16 statement victory over the Seahawks in Seattle, became just the second quarterback in NFL history to register 500 rushing yards in his first two seasons, joining Cam Newton in that category.

The passing yards number gets people all hot and bothered, but Jackson was brilliant in this game. He made critical third-down throws and should have had much better numbers had Mark Andrews not had the worst game of his young career, recording several key drops that killed his quarterback's stats.

Jackson used his legs at key times too ̵

1; he wasn't just panicking and running. He was avoiding contact and making big-time plays with his feet, including a critical fourth-down conversion that eventually resulted in a touchdown.

On that play, Jackson convinced John Harbaugh to let the Ravens go for it instead of kicking a field goal. Harbaugh relented, and it was clear afterwards how much he appreciated his young quarterback being aggressive in that spot. The two are developing a level of trust that is impressive.

Now he's going on the road, winning in big spots and commanding some high praise from very talented defensive players.

Wagner would know too. Watch Jackson blitz past him and be very amazed.

There's just stuff he does with his legs that no one else can do.

Again, I'm highlighting the runs here. And he was only 9-for-20 passing. But he didn't get any help from the guys around him, many of whom are also young. This Seattle defense isn't great and Baltimore's offense isn't as good as we thought from the get go. But Jackson is legit special, and he showed it on Sunday night.

Rodgers still has it

A key talking point this week around the NFL involved a question of Aaron Rodgers' eliteness. In the wake of a ho-hum game from Rodgers against the Lions on Monday night, and with Rodgers' statistics dragging a bit this season, there were legitimate questions being asked. Rodgers snuffed them out with a performance for the Ages against the Raiders, throwing for five touchdown passes, rushing for another and posting a 50 bomb in fantasy as the Packers annihilated Oakland 42-24.

Rodgers was on another level Sunday. It makes you wonder if he was doing some light reading throughout the week. The Raiders had no answer for Rodgers' mastery through the air, as he fired shots into tight windows repeatedly, registering just six incompletions on the day.

All told, Rodgers went 25 of 31 for 429 yards and five passing touchdowns, good for a 158.3 passer rating, the first ever perfect passer rating in Packers history. That neither Bart Starr, Brett Favre nor Rodgers had done it before is pretty mind-boggling, but here we are.

Rodgers got a gameball from his good buddy Matt LaFleur – perhaps the relationship concerns there were overblown? – and a dogpile from his teammates.

Two key takeaways from this performance stand out for me. One, Rodgers is certainly older and he's not going to carve up his opponent every single week. But this is one of the great quarterbacks in NFL history. He's learning a new offense for, basically, the first time in his career. If he gets comfortable and he's on the same page with LaFleur, he's going to continue to put up good numbers. It's reasonable to think we were too hard on him early on

And two, what if the Packers have a good defense, a strong running game and Rodgers hasn't realized his upside yet? It's entirely possible this team, already 6-1 at this point, could end up exploding into another stratosphere if Rodgers is preparing to take off offensively.

Maybe Rodgers and the Packers won't win 14 games. Maybe he won't put up MVP numbers over the course of the season. The division is still up for grabs and the Lions, Vikings and Bears offer very difficult defenses to go up against. Green Bay should have lost on Monday to the Lions! But they didn't, and they're in great shape to keep making a potentially deep run towards a top seed in the NFC.

If today's Rodgers is the Rodgers we're getting for the rest of the season, the Packers could be terrifying.

Just when you think the Chargers can't be any more Chargers-y, they go and do this … and completely redeem themselves . Such was the case on Sunday afternoon, when the Bolts managed to get a surprising second chance at taking down the Titans and botching it in marvelous fashion.

Los Angeles was trailing 23-13 with less than seven minutes left following a Derrick Henry touchdown plunge on a 75-yard drive that seemed to rip apart L.A.'s chance of winning. But Philip Rivers and Co. answered quickly, going 75 yards in 90 seconds for a score to make it a three-point game.

After a "failed" fourth-down conversion from Tennessee – it was actually obvious that Ryan Tannehill got the yard he needed on a QB sneak, but the refs gave an atrocious spot and for some reason Mike Vrabel declined to challenge it – gave them the ball back, the Chargers appeared to win the game with an Austin Ekeler touchdown.

But Ekeler was ruled down at the 1-yard line with 39 seconds left on the clock. They had no timeouts, but that's plenty of time. Except the officials announced there would be a 10-second runoff because of the review followed by the clock starting on his signal. Except Vrabel – rather inexplicably – decided to take a timeout rather than let the clock run. I understand he wanted to maximize time if the Chargers score, but he gave them a minimum of two extra plays by the goal line with that decision.

On the very next play, the Chargers committed a false start and moved back to the 6. That was the point Vrabel probably regretted his decision. Then Malcolm Butler was flagged for pass interference and the Chargers were right back at the 1-yard line with 34 seconds remaining.

Melvin Gordon took the ball next and plunged into the end zone except a review overturned it and Gordon was ruled just short. This time Vrabel did not prevent the officials from taking 10 seconds off the clock, meaning the Chargers had 19 seconds left. Again, let me remind you that Vrabel taking the first runoff would have meant there were nine seconds left, not 19.

It didn't matter because Gordon's next attempt at the end zone came up short. After another review determined Gordon actually fumbled on the play, the game was over. It would have been over anyway, because another 10-second runoff was coming.

The whole thing was chaos, with an important AFC game on the line, not to mention Titans -2.5 sitting squarely out there as well on the line. And just to recap: the Chargers had not one, but two touchdowns overturned and then failed several times from the 1-yard line to score a would-be game-winning touchdown. It was peak Chargers.

I don't know who to be more mad at: Vrabel or Anthony Lynn. The former botched multiple situations late in the game. The laughter feels compelled to force feed Melvin Gordon despite Ekeler being more efficient. We've seen the offense completely stagnate since Gordon returned from his holdout; the Chargers were dominating on offense with Ekeler serving as the primary running back. It really brings into question the offensive approach in terms of usage for these running backs.

At 2-5, the Chargers are flirting with working their way out of the playoff race entirely. They'll make a meaningless false hope run, no doubt, but this season is morphing into a massive disappointment. Maybe that late-game situation was the perfect metaphor.