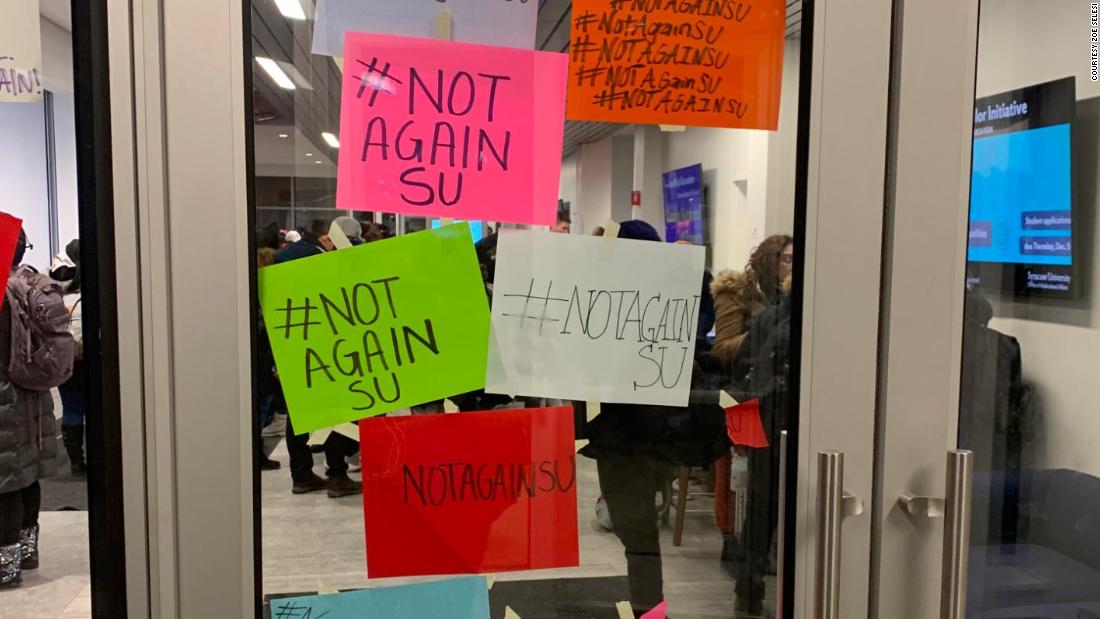 The last day of the fall term is December 13. The statement from Chancellor Kent Syverud was published on the university's website on Sunday.

Syverud's decision is a response to a report by an African-American student saying she was "subjected to a verbal racial epithet from a group of students and visitors" on campus near College Place, according to the statement.

This investigation marks the sixth such incident with reports of racist symbols and languages ​​on campus over the past ten days.

"This report on a violation of our student – and our entire community – safety and well-being is the latest incident of several against Jews, Asians and African Americans," Syverud said in the statement. "I am deeply saddened by these events, including the recent incident."

The perpetrators of the Saturday night event – who were said by Syverud to be members and guests of a Syracuse University – following an investigation led by the Department of Public Safety. The brotherhood in question has been suspended pending the outcome of the investigation, according to University spokeswoman Sarah Scalese.

Scalese declined to comment further on what brotherhood the individuals are from and what they will be accused of.

The Syracuse Police Department, which assisted with the investigation, did not immediately respond to CNN's request for comment.

Mat Ross, the board of trustees for the Psi Upsilon Fraternity – which has been at Syracuse University since 1875 and has up to 70 members – for the past 20 years, told CNN that he heard about the interruption of social events this morning when he received an email from the university's assistant dean for Greek life.

"I can't say I accept to turn off all social activities to do one," said Ross, who graduated from Syracuse University in 1986. "But I understand, because what happened is really awful."

Ross emphasized that Psi Upsilon is not the brotherhood behind the latest racist incident.

Syverud defended his decision to discontinue social activities in the fraternity in his statement: "While only one fraternity may have been involved in this particular incident, given the recent history, all fraternities must be united with the university community to reflect on how to prevent the recurrence of such serious disturbing behavior. "

This incident is not the first time a Syracuse University fraternity is under fire for racist measures. In 2018, a racist video license emerged for minority groups from Theta Tau, a technical fraternity at the university.

While the Department of Public Safety, the Syracuse Police Department and the State Police continue to actively investigate the other racist incidents, the protests continue in the University's Barnes Center.

Protesters gave university officials a deadline of November 20 to meet their 18 short- and long-term requirements, which include the allocation of $ 1 million to create a curriculum to educate the campus on "diversity issues, especially anti-racism."

If their demands are not met, protesters say they will urge Syverud to step down.

Photography outside Michigan apartment party sends at least 5 to the hospital: reports