The football arena in Klagenfurt receives an artistic endeavor 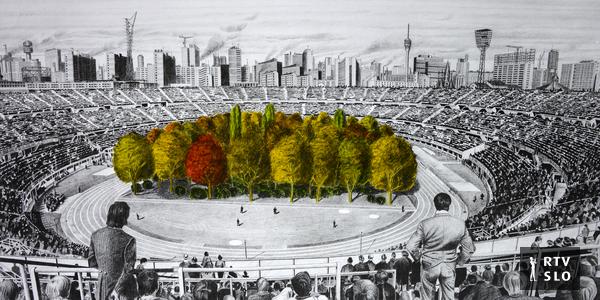 Presentations of both festivals and art installations at the Ljubljana Modern Gallery in the coming week will be attended by the artist Klaus Littmann artistic director of the fair Wiencontemporary Johanna Chrom and Director of Vienna Design Week Lilli Hollein .

Austria's largest public art installation
Artistic intervention For Forest will be a stage transformed Wörthersee in Klagenfurt between September 9 and October 27 to the largest public art installation in Austria. It was inspired by the dystopian drawing by the Austrian artist and architect Max Peintner entitled The Continuous Attraction of Nature .

Austria's largest art fair
The Vienna Vienna Contemporary Art will run from 26 to on September 29 this year for the first time under the artistic direction of Johanna Chromik . Each year, the fair, with more than 100 participating galleries from 25 countries, offers an insight into the lively contemporary art scene in Central and Eastern Europe. It has about 30,000 visitors per year.

This largest art fair in Austria invites visitors to discover a versatile gallery scene that represents both established and promising young artists. " Vienna is the site of the fair, the main characters – gallerists of all generations, and museums with their treasures and experts – are at the center of it, " summarizes the words of Artistic Director Johanna Chromik

This year, the focus department will focus on understanding a country that is not territory-based, but in time. Curator Tevž Logar based on NSK State phenomenon at that time, will question presentation of art in connection with national countries.

The largest curated design festival in Austria
Vienna Design Week otherwise the largest curated design festival in Austria, will be held from September 27 to on October 6 . The festival, which has been organized since 2007, connects and activates the entire city and its design potential, according to a press release. It offers exhibitions, presentations, workshops, participatory projects, lectures and guided tours of the city, with this year's edition focusing on the 9th Vienna District Alsergrund .

This year the festival will include national and international projects, creative and production processes, and experimental strategies in the areas of architecture, graphic design, furniture design and industrial and social design. [19659018] The host country will be Finland this year. " Scandinavia, perhaps more than any other part of the world, has developed its own distinct style that has influenced the world for decades. Finland has written remarkable chapters in design history, and its contribution to modern design is remarkable, " the words from the Design Week leader Lilli Hollein was summarized in a press release.

While Meghan is suffering, Kate is just as loved and happy as #video

The people chose Pink as the most charity among celebrities