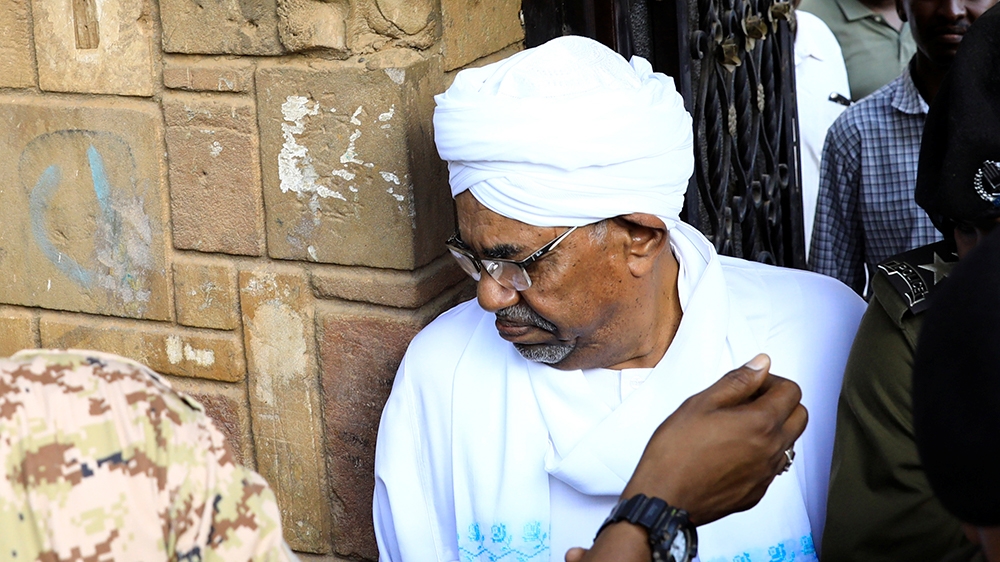 Former US President Omar al-Bashir has appeared publicly for the first time since his military force after months of mass protests against his 30-year-old autocratic rule.

Dressed in a white mantle and turban, the senior leader was seen on Sunday, when he was escorted under heavy duty from a top security prison in the Sudan capital Khartoum to the Prosecutor's Office.

There, the prosecutor accused him of facing charges of "holding foreign currency and acquiring suspected and illegal wealth", according to the official SUNA news agency.

He was given a week to raise objections, questioning additional unspecified corruption charges and being taken back to the Kobar Prison.

If al-Bashir did not appeal, he could appear in court as early as next week, Sudan's prosecutor Alwaleed Sayed Ahmed said Saturday.

In Khartoum, the movements against the 75-year-old former president triggered barriers and skepticism from critics who dismissed it as an attempt by Sudan's new military rulers to refuse attention from a fresh-blooded breakdown against the protesters as its reluctance to cite power. a civilian led transitional administration.

They also questioned the likelihood that al-Bashir would get a fair trial in Sudan or be held accountable for the most incredible charges against him.

The former leader, who came to power in a coup in 1

989, by the International Criminal Court (ICC) on allegations of crimes against humanity and the genocide of abuse of Sudanese forces in the country's Darfur region between 2003 and 2008.

Instead, al-Bashir's first trial to be required to violate a decree he introduced in February as part of an attempt to curb protests against protests against the benefit of rising food prices and a currency crisis.

At that time, when protests rallied across the country, al-Bashir had introduced a state of emergency and made it illegal to carry more than $ 3,000 in foreign currency.

But shortly after he was destroyed on April 11, the transition military council (TMC), which replaced the former leader, abandoned the security forces seizing more than $ 113 million in money in three currencies from their residence.

If Al-Bashir is found guilty of breaking the urgency, he could face at least ten years in prison.

Prosecutors have also opened other criminal probes to al-Bashir, including fees for money laundering, terrorist financing and "ordering the killing of protesters" – the latter being a crime carrying the death penalty in Sudan.

Although protesters had demanded that al-Bashir be held accountable for alleged maladministration during his service, the timing of the upcoming trial has left many suspects.

Jalela Khamis Kuku, a human rights activist, said that TMC attempted to draw attention from the demonstrators' call for accountability over June 3, raiding in a protest camp outside the military quarters.

Sit-in began on April 6 the day before al-Bashir's toppling and continued as protesters stuck to civilian rule claims. But talking about the composition of an intermediate body that was pulled, soldiers opened fire on their in-in.

According to a Sudanese medical group, more than 100 people were killed in the June 3 raid. Some of their bodies were sold in the Nile, hundreds of wounded and dozens of women raped.

However, the Ministry of Health sent the death aid at 61 years.

"The priority must be for life lost because the whole country is sad," said Kuku by telephone from Khartoum.

Originally, TMC refused to attempt to spread the protest camp, but on Thursday admitted it had ordered the removal of the protest camp. Violence occurred after some soldiers "deviated" from the plan, said Shams al-Din Kabashi, a TMC spokesman.

He acknowledged that "violations happened" without elaborating.

Waleed Madibo, founder of the idea Sudan Policy Forum, said the move towards al-Bashir was also aimed at distracting the international community.

He added that al-Bashir was unlikely to get a fair trial under TMC.

"The whole process is not independent and is not credible," he said. "Omar al-Bashir is requested by the International Criminal Court, rather than taking judgment to the court for killing or affecting the killing of half a million people, you bring him to court to have closed his eyes [tens of millions of dollars]."

At the same time, al-Bashir's summons to the Prosecutor's Office came as Mohamed Hamdan Dagalo, Deputy Head of TMC who seems to go back to previous agreements with protest leaders on an interim government.

"Our problem with [protest alliance] is that they want to form an optional parliament to exterminate us," he said, referring to an earlier agreement where the military and demonstrators agreed on a three-year term, [19659005] "We are ready to form a technocratic government. But our problem is that Parliament will not be elected," he says. told supporters in Khartoum.

The general, who is generally known as Hemeti, is also the commander of the feared paramilitary Rapid Support Force, who accuses protesters of being behind the violence at the sit-in.

Hemeti promised the death penalty for those involved in the attacks.

"We work hard to take those who did this to the gallows," said the general.