Seven days of turmoil and bills: thousands of streams into Ecuador's capital 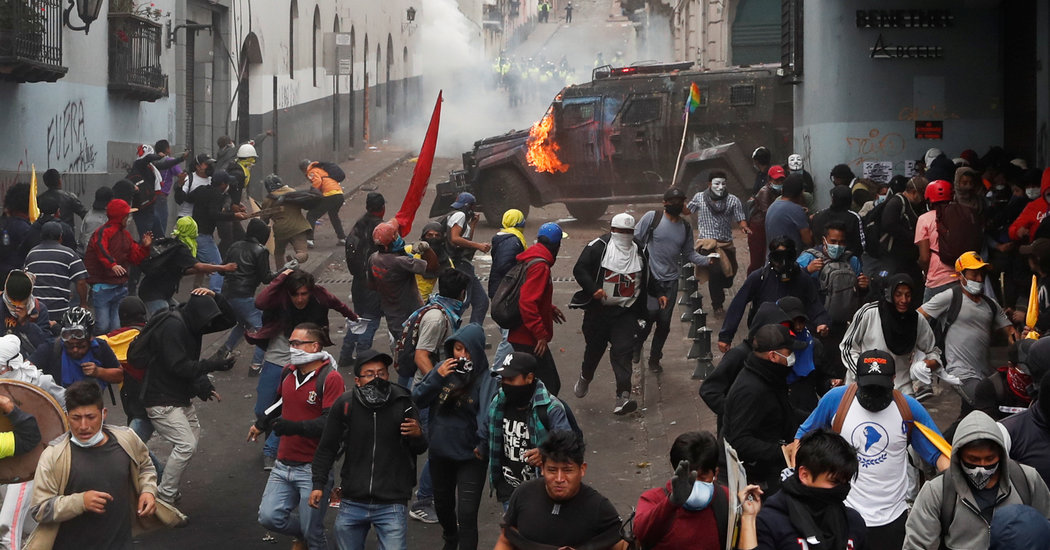 QUITO, Ecuador – Thousands of protesters poured into downtown Quito on Wednesday, the seventh day of violent unrest that has rendered the country a virtual standstill, has led to the arrest of hundreds and threatened government stability.

President Lenín Moreno of Ecuador arrived in Quito, the capital, on Wednesday afternoon to meet leaders of the protest movement, which was ignited by the government's decision last week to eliminate a popular fuel subsidy program. Protesters also staged government assemblies in cities across the country, often barricading roads.

The demonstrations have been so fierce that Moreno this week moved the government site from Quito to the coastal city of Guayaquil, more than 150 miles away, for the first time in over 100 years that it was moved from the capital.

More than 700 people have been arrested across the country during the past week of protests. On Wednesday, Quito police used tear gas to break up crowds, which included members of trade unions and domestic groups, and some protesters threw Molotov cocktails.

The Red Cross announced that it would shut down operations and assistance because it could not ensure staff safety.

The government has also pushed back. In Guayaquil, the authorities themselves blocked a large bridge to frustrate protesters, and a curfew this week excluded people from areas around government buildings and other strategic places after 5 pm

The demonstrations started by Mr. Moreno's decision to eliminate fuel subsidies as part of a austerity plan required by an agreement with the International Monetary Fund to help Ecuador stabilize its finances.

The cut in fuel subsidy, which will lead to higher gas and consumer prices, upset many Ecuadorians who have endured years of economic downturn.

Transport unions were among the first to demand a national strike, and students, workers and domestic organizations soon joined. The unions stopped the strike when they reached a price increase agreement with the government. Still other workers, indigenous groups and students – along with some political rivals from Mr Moreno – have continued to protest in large numbers.

The origin movement has become a powerful political force in Ecuador since the early 1990s, when protesters first marched to Quito and demanded legal recognition of their property over lands they considered their ancestors.

In a television interview on Tuesday, Mr. Moreno that he would not consider leaving his service.