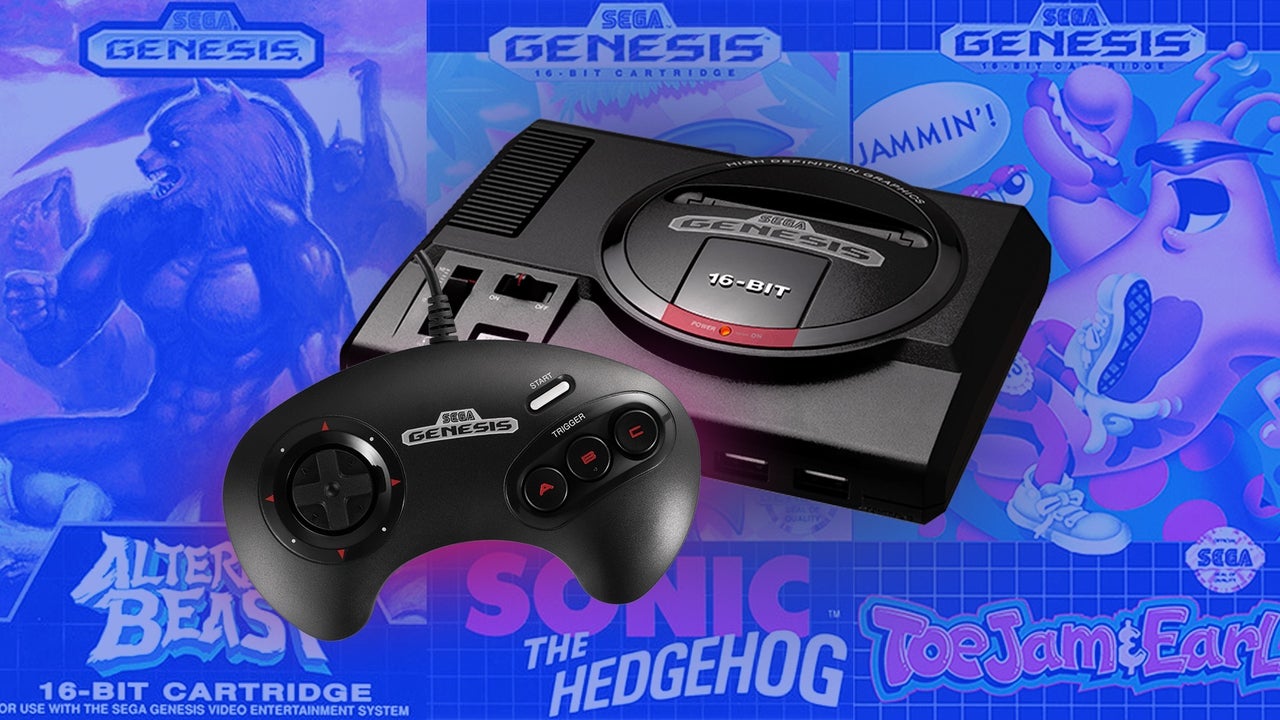 is the best all-in-one retro console ever made. With a compilation of 42 games (some of which never saw real Western releases), good UI and software handled by the legendary software company M2, eye-catching menu music composed on original hardware of a Genesis musical legend and some trademarks of M2 surprises are all the high watermark retro mini consoles will be measured in the future. It's not perfect, but it rises easily above everyone else.

The small SEGA Genesis Mini takes its design very seriously, with spring-loaded cartridge compartment doors swinging closed, a variable volume control (which does nothing) and even an expansion folding door that pops up without reason at all (at least for the US edition, the Japanese version has an optional, completely non-functioning version of Tower of Power).

The included Genesis controllers look and feel like the real deal, and my first thought of holding one in my hands after all these years was "wow these things are great." It is a frame that the superior 6-button controls do not include, but for basically 40 of the 42 games included, the package controls work well. That makes Street Fighter 2 and Eternal Champions a much better experience, but you'll still only play Eternal Champions once.

Sega sent a couple of 6-button controls (8 when counting the shoulder buttons), and although they are not necessary for the Genesis Mini experience, I definitely recommend that you pick up at least one. The extra buttons are a nice touch, but the controller just feels better in my hands. Best of all, the "Mode" button brings up your menu options with a single push, rather than the push-and-hold method needed with the pack-in controllers. The Retro-Bit controls are officially licensed for use with the Genesis Mini, and because they are USB they work with your PC and even Nintendo Switch. If you have an extra $ 20, I highly recommend that you fit your Genesis Mini with one.

Inside the box is also an HDMI cable, USB power cable and an AC adapter. The only thing it lacks is a cool, period-specific poster like Super Nintendo and NES Classics. As a collector of the video game detritus, there is nothing that attracts me more than a poster that I will never come up with to hang up.

The main menu is a delight. When the Genesis Mini starts, the game icons burst from the center of the screen and take their places in the UI. An eye-catching song by Streets of Rage 2 composer Yuzo Koshiro plays over the main menu, and you can sort the games alphabetically, by release date, genre or number of players. It is also completely animated: when you change the sorting options, the boxes move quickly to their new order. There is even an option to sort them by spine and let you see all the available games at once as if they are sitting on a shelf.

Navigating back to the main menu from one of the games is an easy thing to hold the "Start" button for a few seconds on one of the pair with the included 3-button controllers. Personally, I recommend that you pick up the officially licensed Retro-Bit USB Genesis control for a million different reasons, the best of which is to press the "Mode" button with a quick press as you hold down the Start button on the included controls .

So far I have not found any surprises in the menus in game. You can save, load, restore or return to a game or return to the main menu. Standard stuff. Back in the settings menu, filter and tape options are also quite common and are a place that I wish M2 had added a little extra. You can choose between one of two wallpapers or no wallpaper at all. There is also an option to play 4: 3 or 16: 9, although you have to be a police officer to play in 16: 9. There is no pixel-perfect option, which is strange since almost all emulation software includes the pixel-perfect option, but you can turn a CRT filter on or off. This only adds faux scanlines to the games, giving a rough estimate of playing them on a period-appropriate display. It's a nice touch, one that I almost always choose when playing old school games. But it makes games a little too dark, because so much of the screen is replaced with small black lines.

With the Genesis Mini, SEGA chose quantity AND quality, giving us exactly twice as many games as SNES Classic, its closest competitor. The list is full of well-known Genesis classics, but M2 and SEGA went ahead and added some games that had never been released on western beaches. For Darius, it was never transferred to Genesis or Mega Drive at all. With so many games from throughout SEGA Genesis's lifetime, it's hard to complain about the included library. There are hundreds, probably thousands, of hours of gaming inside.

So what about these games, huh? It's a super-solid line-up, which spans a wide release period and includes games that you will definitely expect as Sonic and Sonic 2, for games you may remember as Alyssia Dragoon, right up to the never-released in the western version of Tetris for Sega Genesis. They all play mostly as you remember them.

Unfortunately, I noticed some strange emulation errors, especially in Sonic. For example, if you catch a chaos emerald in one of the bonus levels, it blinks in and out of existence on the points screen. The chessboard pattern on Dr. Robotnik's wrecking ball in the first boss fight also flickers in and out of existence, making the ball shiny and brown rather than checkered.

Strange but rare emulation issues aside, games that you remember gladly do not disappoint. I'm excited to finally let myself through Phantasy Star IV after missing it the first time. It's really hard to find fault with this lineup, although some of the previous games, like Altered Beast and Golden Ax, are pretty clumsy nowadays. But both of these games are historically important to Genesis. Long before Sonic wowed us with his rude attitude and blast, Altered Beast was the package of Genesis.

Every confirmed game for the Sega Genesis Mini

The bonus games, Darius and Tetris, are also important, but for different reasons. I will say that the Genesis version of Tetris, which was never officially released in the US, is perhaps the group's most disheartening game. Of all the dozens of Tetris versions I've played over the decades, I think it might be my least favorite way to play Tetris. Historically, it is significant. Gameplay-wise? Just try once and then move on.

There are other Genesis games included in the collection that you may have never played before because they were not released in bulk. Mega Man: The Wily Wars, a 16-bit remaster of the first three NES Mega Man games, was a Sega Channel exclusive. In my entire life, I've never known anyone who had a Sega Channel subscription. Monster World IV, another game included, never came out for Sega Genesis. It eventually found west through the Wii Virtual Console, but if you didn't buy it then there was no legitimate way to play it. Now you can play it in HD. The Genesis Mini gives us a chance to visit the US versions of games almost impossible to get otherwise.

You can't do this on Nintendo

One of the most surprising features of the Sega Genesis Mini, and truly M2's reputation to go beyond, is the fact that you actually get even more content when you changes language options in the system menu. There is no reason for the changes to exist, as different regions receive different versions of the console. And yet they are included, and it's such an unexpectedly cool addition.

For example, if you change the menu to Japanese, the entire user interface changes to match the Japanese Mega Drive, right down to the box art of the games. Even the ROM versions change to match the region, so Dr. Robotnik's Mean Bean Machine becomes Puyo Puyo. Even subtle differences give away the fact that the Genesis Mini has more ROMs than expected: the Japanese version of Sonic has parallax-rolling clouds, while the United States lacks the feature. It's so completely unnecessary and I love it.