Scientists identify gene as a master regulator in schizophrenia 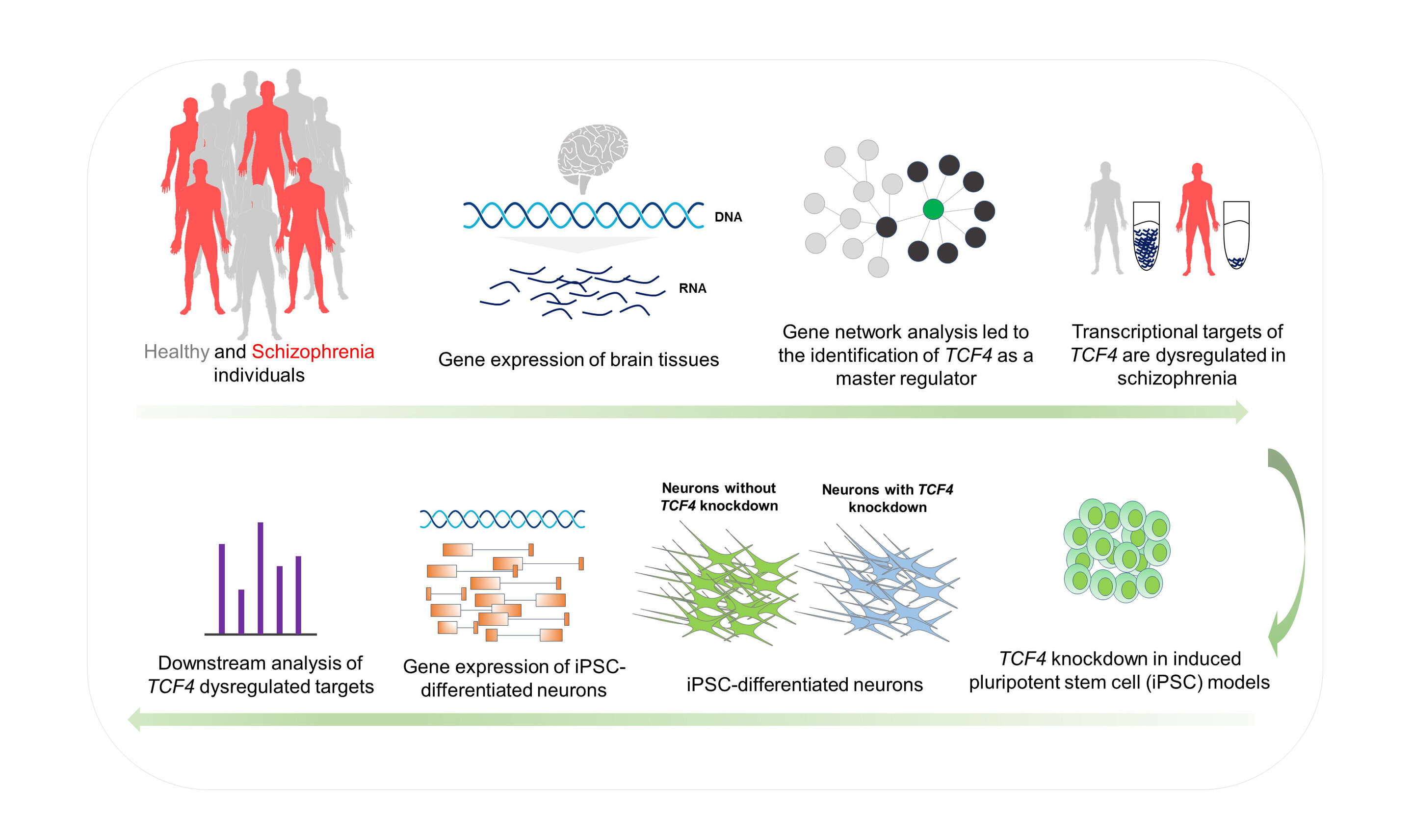 Using computational tools to investigate gene transcription networks in large collections of brain tissues, a scientific team has identified a gene that acts as a master regulator of schizophrenia during early human brain development. The findings may lay the groundwork for future treatments for the highly complex neuropsychiatric disorder.

"Because hundreds, or even thousands, of genes may contribute to the risk of schizophrenia, it is crucial to understand which are the most important ones, orchestrating core networks in the disease," said study leader Kai Wang, Ph.D. ., of the Department of Pathology and Laboratory Medicine and the Raymond G. Perelman Center for Cellular and Molecular Therapeutics (CCMT) at Children's Hospital of Philadelphia (CHOP). "Pinpointing master regulators may help guide us toward priority targets for novel treatments in the future."

The study appeared online today in Science Advances . Wang co-led the research with Jubao Duan, Ph.D., the Charles R. Walgreen Research Chair and an associate professor at the Center for Psychiatric Genetics of the North Shore University HealthSystem (NorthShore) and the University of Chicago, Evanston, Ill. The first author was Abolfazi Doostparast Torshizi, Ph.D., of the CCMT at CHOP.

Although schizophrenia affects about 1

in 100 adults, and is highly heritable, the genetic architecture of the neuropsychiatric disorder is notoriously complex, with many unsolved questions. Wang and colleagues contrast the current state of knowledge with recent advances in cancer research. Oncology researchers have identified many gene pathways and networks that when perturbed, result in specific types of cancer. That knowledge has allowed definite distinctions in diagnosing subsets among types of cancer, and has led to individualized treatments based on a patient's genetic profile.

The underlying genomic biology in neuropsychiatric disorders is likely to be more challenging. In the most extreme case, researchers recently proposed an "omnigenic" model in which nearly all the genes in a disease-relevant cell type contribute to a specific neuropsychiatric disorder, but Wang points out, "Not all genes carry equal weight— the problem is to determine which are more important than others. "

Thus, the study team used computational systems biology approaches to discern a disease-relevant core pathway in schizophrenia and to discover a master regulator in that pathway that affects hundreds of downstream genes.

Wang and colleagues analyzed two independent datasets of biological samples from schizophrenia patients and control subjects. One dataset, the CommonMind Consortium (CMC), is a public-private partnership with well-curated brain collections. The other was a collection of primary cultured neuronal cells derived from olfactory epithelium (CNON), generated by study co-authors at the University of Southern California and SUNY Downstate. The CMC dataset contained adult postmortem brain tissue, while the CNON dataset, used to validate findings from the CMC study, represented cell cultures that contained neuronal cells from nasal biopsies. Applying an algorithm developed at Columbia University to reconstruct gene transcription networks, the study team identified the gene TCF4 as a master regulator for schizophrenia.

Previous genome-wide association studies (GWAS) had indicated that TCF4 was a locus for schizophrenia risk, Wang said, but little was known about the gene's functional effects. The study team investigated those effects by knocking down, or decreasing, the gene's expression in neural progenitor cells and glutamatergic neurons derived from induced pluripotent stem cells in Duan's lab at NorthShore.

Observations on three different cell lines showed that, when knocked down , the predicted TCF4 regulatory networks were enriched for genes showing transcriptomic changes, as well as for genes involved in neuronal activity, schizophrenia risk genes having genome-wide significance, and schizophrenia-associated de novo mutations. Although some of the cellular effects of TCF4 dysregulation were previously shown in mice, Duan noted that the results of perturbing TCF4 gene networks in human stem cell models may be more relevant to the neurodevelopmental aspects of neuropsychiatric disorders.

The current study, said the researchers, sets the stage for further investigations. One direction, Wang said, is to use expanded datasets to explore whether other master regulators in addition to TCF4 may act in schizophrenia. If so, it may eventually be possible to classify patients with schizophrenia into subgroups more responsive to specific treatments, as is the case in many cancers, to assist in implementing precision medicine in psychiatric diseases.

Other approaches, added Doostparast, may involve pursuing functional genomics at the level of single cells, to assess the cell types most influenced by dysregulating gene expression.

The study represents one of the first successful examples of combining computational approaches and stem cell-based experimental models to disentangle complex genes. networks in psychiatric diseases.

Wang noted limitations in the study. The empirical validation focused on neural progenitor cells and glutamatergic neurons, but other cell types may be investigated in the future, such as interneurons and microglia, which have also been implicated in the development of schizophrenia.

The neurobiological mechanisms behind schizophrenia may depend on gender