Breaking News
Home / US / San Francisco School Board votes to conceal, but not destroy, disputed murals

San Francisco School Board votes to conceal, but not destroy, disputed murals 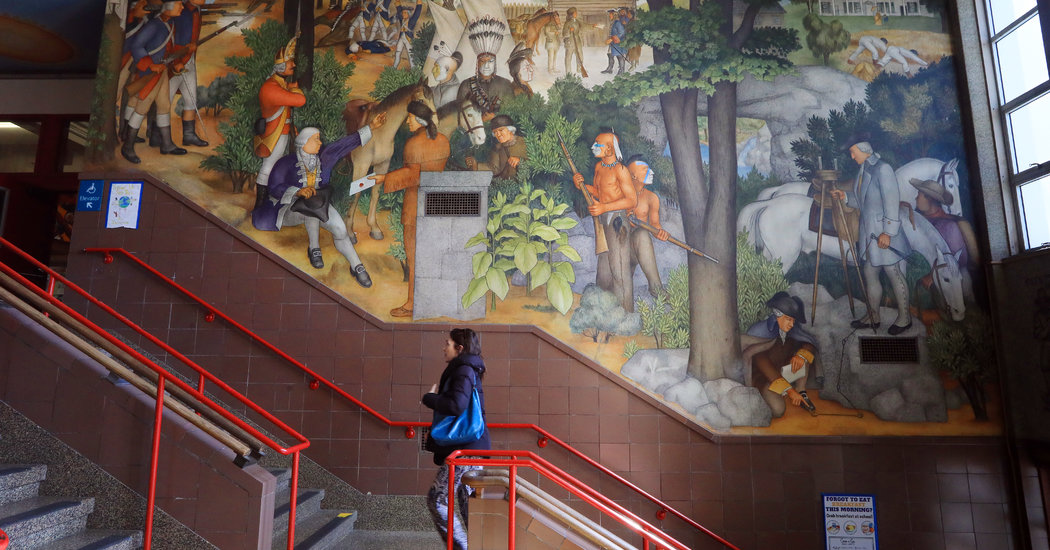 In a compromise that did not appear to end the fight, the San Francisco Board of Education voted Tuesday night to conceal, but not destroy, a series of depression-era school paintings that some deemed offensive to Indians and African Americans.

Voting 4 to 3, which came after a tense and emotional meeting, invalidated the Board's previous vote to paint over murals, a decision that had brought widespread complaints about censorship. [19659003] Although the murals were now preserved, the defenders of the artwork opposed the new decision to hide them from view. Jon Golinger, executive director of the Coalition for the Protection of Public Art, a group formed to preserve the murals, said his group "would not yet rule out any legal or political options, including a possible initiative at S.F. Vote. "

" Although it is a step in the right direction to take permanent destruction from the table, we will continue to oppose spending $ 815,000 to permanently wall the murals so no one has the choice to see them or learn from them , "He said.

Those who opposed the murals were too disturbing for students also left the meeting dissatisfied and in some cases angry. One board member, Alison M. Collins, an African American who wanted the murals to be destroyed or removed, said she blamed "outside actors" who "dictate to our children, mine included, what they should see and the stories they should be told." is not history; it is a remnant of a bygone era. "

Mural, a series of 13 frescoes entitled" The Life of Washington ", was painted by Victor Arnautoff, a Russian emigrant and a communist, in the corridor of George Washington High School in the mid-1930s when the school was built.

His frescoes were intended to be critical of the first president and, by extension, the country's treatment of African Americans and Native Americans. Three of the panels are contested: one showing Washington's slaves at Mount Vernon, another showing an Indian with a scalp hanging from his waist, and a third showing a dead Indian at Washington's feet.

In liberal San Francisco, residents are accustomed to fighting over housing costs, technology-driven gentrification and homeless shelters in the neighborhood. But the dispute over this work of art has been more hot and vitriol than most.

In response to complaints from Native Americans and others who said the paintings were racist and harmful to blacks and Native Americans who saw them, the school board voted unanimously in June to paint over murals.

But with pressure from local conservation leaders and the attention of national news media, School Board President Stevon Cook, an African American, wrote a new resolution that eliminated the plan to paint over murals while assessing ways for them to be removed from public view "with solid panels "or other" material, means or methods. "

At Tuesday night's meeting, Pastor Amos Brown, President of the San Francisco Branch of the NAACP, who is for holding the murals on the screen, told the board, "It pains me that we have become complicated in an action to make an editorial of history. "

Gray Brechin, historian and founder of the Living New Deal Project, accused board members of not understanding "what you are looking at." He urged people "to remember the school board."

Earlier this week, actor Danny Glover, a Washington graduate, joined the coalition to save the murals, saying that destroying or blocking them from view "would be akin to book burning."

But their comments and comments from other conservation leaders did not seem to have any effect on the vote.

Just before the meeting, Mark Sanchez, a school member who does not want the frescoes to appear, said: “This country began by justifying white supremacy through the dehumanization of colors. This is an example of that. "

He said in an interview that people who want to save the murals put" art over humanity. "He added," If the murals depicted the Holocaust, they wouldn't be in a public school. "

In an emotional speech explaining his voice, a board member, Faauuga Moliga, said:" I do not understand why people stand up for this. There are black and brown boys dying. "

Sharez Brown, a 16-year-old junior at George Washington High School who spoke to the board before the vote, said the murals were" harmful and harmful to many students. "She said that they" tell the story from a white people's perspective "and added that" students should never hear "I'll meet you on the dead Indian."