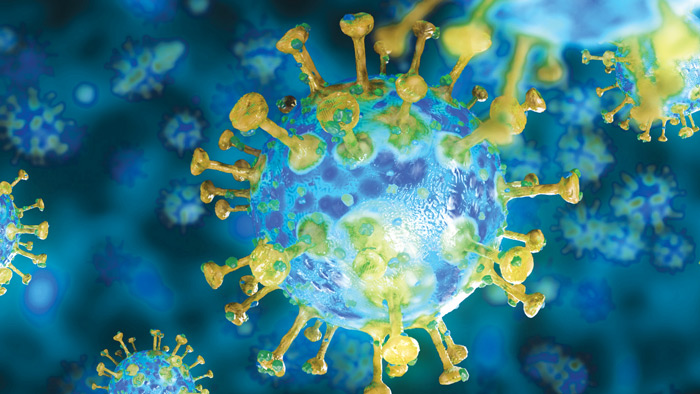 In zombie movies, a “mutant” is a scary creature. In reality, however, it is normal for a virus to mutate, and this phenomenon is in principle neither good nor bad. So far, the SARS-CoV-2 mutations do not seem to have significant consequences, writes AFP, taken over by Agerpres. When it enters a cell, a virus multiplies: it copies itself to spread. During each replication, an error occurs in the copy of the virus genome, such as a computer “bug”. However, this error may or may not have a more or less significant impact on the behavior of the virus. The mutation can be “favorable” to the virus – it helps it survive better – or “unfavorable” (it weakens its power). It is a process we call natural selection. RNA virus (DNA-related generic material), a category to which SARS-CoV-2 belongs, mutates more often than DNA viruses because coding errors are more common.
At the same time, coronavirus mutates more slowly than other RNA viruses: to date, SARS-CoV-2 has mutated twice as slowly as the flu virus and four times as slowly as HIV, according to researcher Emma Hodcroft, an epidemiologist. molecular study at the University of Basel (Switzerland), recently cited by the journal Nature.
Researchers even believe that the new coronavirus is relatively genetically stable. But what is important is to know that these mutations have remarkable effects. And if they make it more “dangerous”? Do these mutations make him more contagious? More pathogenic, which means more likely to trigger the disease? More virulent, that is, can trigger a more serious form of the disease? Less exposed to a vaccine? More resistant to our immune system?
Coronavirus genetic mutations are monitored worldwide by researchers, who sequence the genome of the viruses they identify and distribute in an international database, GISAID, full of valuable information from tens of thousands of sequences.
To date, there is no clear indication that the new coronavirus has been mutated in a way that could significantly alter its effects on humans. One thing is for sure: the new coronavirus is no exception to the rule and is undergoing “continuous mutations”, French senators Marie-Paule Kieny, virologist and head of research at INSERM, explained this week. “The problem” is whether these “mutations alter virulence,” added his colleague Dominique Costagliola, an epidemiologist who was also heard in the Senate. So far, “we have no information” in this regard.
“To date, this does not mean that it will never be the case; it does not appear that these mutations would affect the pathogenicity of the virus,” Kieny added.
In a study published in July in the journal Cell (after a preliminary version published in the spring), researchers said that a mutation allows the virus’ most common strain to infect cells more easily thanks to a change in protein S, “point” through which it enters the cell. According to their hypothesis, this mutation could make the virus more contagious, which would explain its exponential spread.
Many researchers have emphasized the limitations of this hypothesis and stated that the highest infectivity was observed only in the laboratory and that this study does not provide evidence that a greater ability to infect cells makes it more contagious.
The strictest conclusion is therefore that, if this stem cell is undoubtedly more “contagious”, it is not necessarily more “transmissible” from person to person.
The authors also observed, in the case of hospital patients, that this strain did not cause more severe forms of the disease. As for the hypothesis formulated in August by a researcher in Singapore that the virus becomes less virulent, it has not been scientifically substantiated. Again, a lower severity of symptoms can be explained by other factors: less comorbidities, more effective treatment, etc. When mutations significantly alter the “antigenicity” of a virus, in other words, its ability to cause antibody production. , vaccines can lose their effectiveness.
However, it has been observed that SARS-CoV-2 mutates relatively slowly so far, and from this point of view it is in any case good news for the vaccine.
At present “it does not seem (…) that these mutations make any difference in what we call their antigenicity”, says Marie-Paule Kieny.
“Most vaccines have been developed with viruses similar to the first strains in Wuhan, but many researchers and companies have tried to test whether the antibodies they succeed in producing through their candidate vaccine also neutralize new viruses.” she said, “and they have actually seen new viruses neutralized as well as older ones.”
“So at present it does not seem that these mutations, even if they are real, lead us to the conclusion that we should continue as in the case of influenza, a different vaccine each year,” the researcher concluded.

Reverse counter to the cure for COVID-19. Specialists test 40 vaccines per person, over 90 per animal and 5 are already approved for limited use

Five out of six children under the age of two are malnourished, …