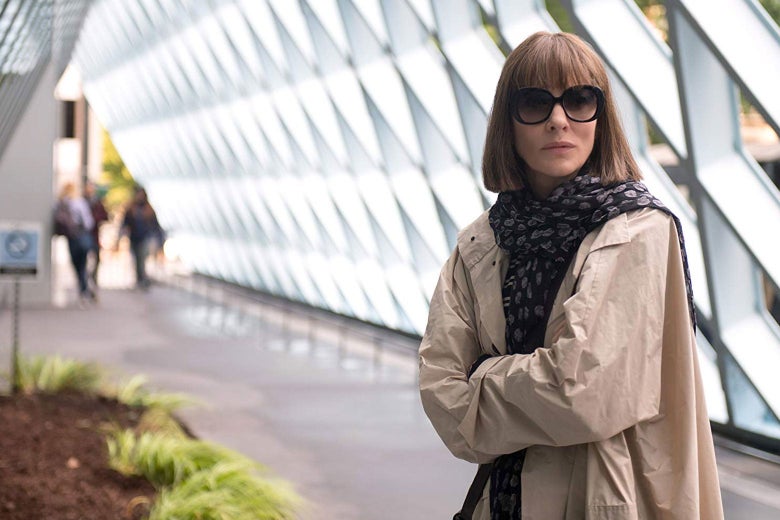 Maria Semple's 2012 bestseller Where You Go, Bernadette puts a delirious 21 st -century spin on the epistolary novel. The story, which spans several continents and ships back and forth over a time frame of about 20 years, emerges almost entirely via “primary documents”: emails, faxes, blog posts, police reports, ship's logs. Weaving together these archival fragments are passages of first-person narration from the protagonist, a 15-year-old Seattle girl trying to solve the mystery of her socially anxious mother's sudden disappearance. The book flashes nimbly across a range of tones: droll social satire, antic farce, psychological suspense, heartfelt family drama. It all adds up to a sharp and funny portrait of a fascinating, maddening woman in full midlife crisis, as told by a teenager who's real-time discovery, along with the reader, the long-concealed truth about her mother's past.

Adapting Where You Go, Bernadette for the screen seems like the most obvious project for Richard Linklater, a director who has been most successful when working from his own original scripts. But if you look at his choices over a now nearly 30-year-long career, Linklater has pulled off as many stylistic shifts as Semple, if never within a single work. He's adapted stage plays ( Tape ) and true-life crime stories ( Bernie ), directed a musical that later turned into a Broadway show ( School of Rock ) , experimented with then cutting-edge animation techniques ( Waking Life A Scanner Darkly ), and explored the possibilities of narrative filmmaking with the 12-years-in-the-making Boyhood . Not to mention that his best-remembered films— Dazed and Confused the Before trilogy, Boyhood Slacker —all touch on the themes at Bernadette 's core: the pain and elation of being young. The melancholy of getting older. The difficulty and necessity of staying true to others and to oneself in the face of life's inevitable disappointments and losses.

The stylistic breadth of Linklater's filmography and his skill at observing complex human relationships more than qualify him to take on the ambitious task of translating the thoroughly literary Where'd You Go, Bernadette into a work of cinema . But sometimes underserved by a screenplay (co-written by the director, Holly Gent, and Vincent Palmo Jr.) that smooths over some of the novel's bumpiest twists and floods the story's dark places with a skosh too much sweetness and light.

Bernadette Fox (Cate Blanchett) and her daughter Bee (the charming newcomer Emma Nelson) have the kind of relationship that many mothers (even if they aren't reclusive genius architects) and many daughters (even if they aren't flute -playing straight-A students) will recognize: They get each other's sense of humor as well as they get on one another's nerves. Bernadette is a former architecture star, the long-ago recipient of a MacArthur genius grant who has worked since her daughter was born. Overwhelmed by the social demands of upper-middle-class motherhood, she walls herself up in the family compound, a derelict former girls' school so neglected there are blackberry vines growing through the floorboards.

Though she's warm and loving with her family, even many day-to-day tasks are too much for the antisocial Bernadette to handle: She outsources them to a virtual assistant in India, to whom she dictates long, rambling emails that clue us in to her fierce intelligence as well as her chronic low-grade depression. But Bernadette never fails to pick her daughter up from school, where the other mothers mistake her extreme introversion for snobbery (which, to be fair, it often resembles — Bernadette's go-to rant has to do with the hopeless provinciality of Seattle).

In exchange for finishing middle school with a perfect report card, Bee persuades her parents to take her on a trip to Antarctica over Christmas break. Her father Elgin (Billy Crudup) is more than game to take a break from his high-pressure job as a robotics engineer at Microsoft. But Bernadette is so terrified at the prospect of small talk with other passengers, not to mention seasickness, that she begins scheming ways to get out of the trip. Meanwhile, the tension between Bernadette and her uptight neighbor Audrey (Kristen Wiig) reaches a breaking point as they clash over the blackberry plants that are beginning to invade Audrey's backyard.

In the novel, Bernadette Fox is the absence the story revolves around, a missing person from Page 1. By contrast, Bernadette's movie is on-screen almost every minute. Even when her daughter and husband have no idea where she is, the audience continues to accompany her independent adventures. This change of focus really cuts down on the story's suspense, especially in the movie's last third, when the forces keeping Bee and her mother apart sometimes seem less fateful than simply logistical.

The whirring gears of subplot that power Bee's search for her mom — including but not limited to the movements of a Russian identity-theft ring and the interparent intrigue at a posh Seattle private school — have been trimmed down to a minimum, with the paradoxical effect of making the story less than busy. James Urbaniak pops up too briefly as an FBI agent tasked with trailing Bernadette, Laurence Fishburne gets one scene as her former architecture colleague, and Judy Greer drifts through as a therapist Elgie visits to consult about what he fears is his wife's slide into mental illness. As the gossiping mothers of two of Bee's classmates, Wiig and Zoe Chao provide exposure and comic relief, though both characters are stripped of the richer arcs given in the novel. If these initially disparate plotlines crisscross and converge, what should feel like skillfully orchestrated chaos starts to seem like narrative clutter.

Used to see Cate Blanchett play bitches, divas, and queens — women fully in command of their power. A fascinating change to see her as an introverted and insecure middle-aged woman, someone who's lost faith in her ability not just to create but to cope. The mystery of Bernadette's disappearance may be resolved too quickly and simply to bring the audience to the edge of their seats, but Blanchett's cranky, spiky performance keeps us engaged to the last moment in the mystery of who Bernadette Fox is, even to herself.

The aspect of the book Linklater has chosen to focus on, and the one he infuses with playfulness and warmth, is the complex bond between a flawed but loving mother and her devoted if perhaps too responsible child. Just as he did with Patricia Arquette in Boyhood Linklater sensitively explores the ambivalence of a woman who wonders whether too much of herself gave in to the work of being a parent. The credits end with a dedication to Linklater's own mother, Diane, who died in 2017 and whom he identifies movingly as "my Bernadette." For all this movie's faults, I can't wait to take my own middle-school-aged daughter to see it; It's rare to find a movie about mothers and daughters that neither sentimentalizes nor oversimplifies that too often idealized relationship.