Adequately creating a mecha action game seems like an absolutely daunting task. Years of anime shows like Gundam and Genesis Climber MOSPEADA have enriched our imaginations of what action combat would look like if these massive armored suits were real. It'd be swift and spectacular to watch. Recreating that in a video game, with the limited number of button modern controllers offer us, is something that probably shouldn't work. And yet, Daemon X Machina does an incredible job of recreating the look and feel of epic battles from those shows.

The combat in this game has provided me with some of my biggest thrills of the year. It's everything else surrounding that combat which is holding the final product back. 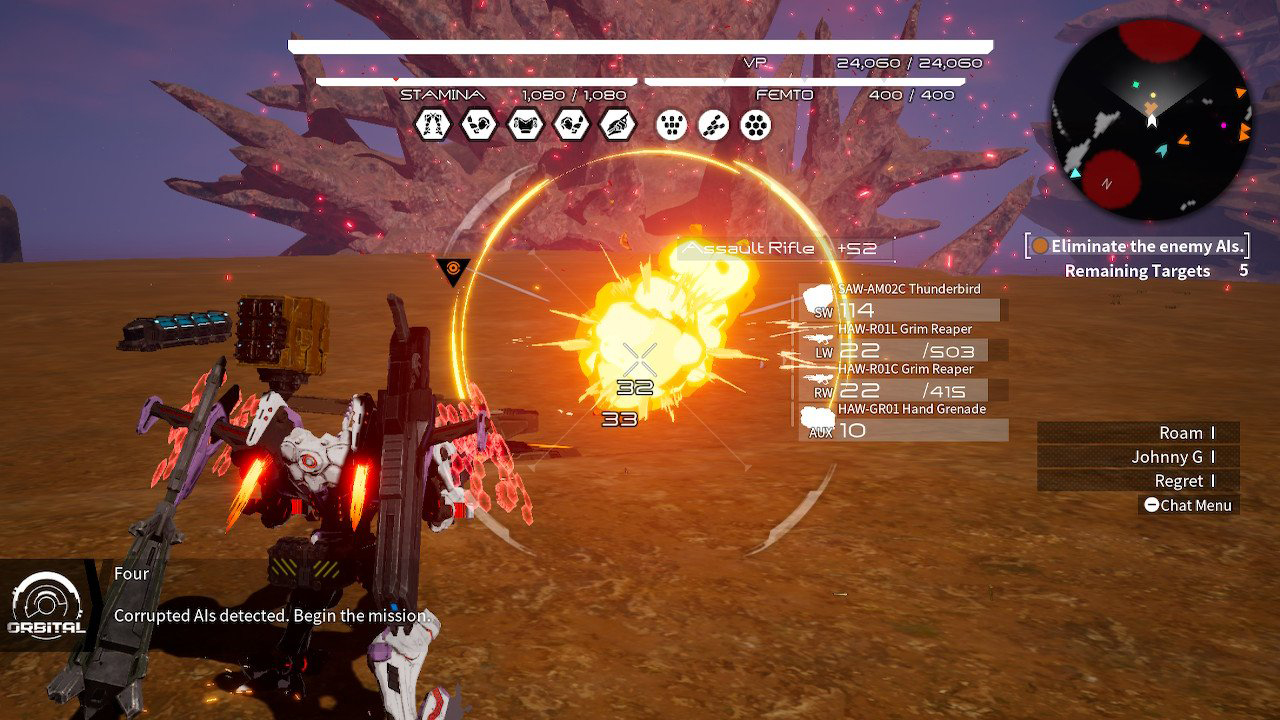 Daemon X Machina takes place in a post-apocalyptic Earth, where a band of mercenaries from different organizations complete missions in the Outer Rim using giant mech suits known as Arsenals. It's where, many years ago, humanity changed forever after a chunk of the moon broke off and collided with the planet. As a newly awakened mercenary, constantly referred to as "the rookie" by others no matter how many dangerous missions you complete or how many times you beat them in battle, you'll be joining in the exploits of these heroes and villains as they do battle with the Immortals, massive robots that corrupt the drones and tanks created by humans.

Going out in these missions is an absolute blast and if you haven't downloaded the newest demo, I highly suggest doing so before you make a decision on the game. Missions are broken down into a familiar loop: you accept the mission, find out some details about where you're going from Four – your A.I. companion – probably hear some story exposition from the other mercenaries, and then blast off to your destination. There can often be a lot of character dialogue before you're allowed onto the battlefield, but it's mostly well written and the voice acting does a decent job.

Once in battle, the controls of your Arsenal almost feel second nature. The ZL and ZR buttons control the weapons in your unit's left and right hand respectively and you can switch them out on the fly with any weapons you have assigned to your pylons. There are also shoulder-mounted weapons like missile launchers and rail guns to negotiate, as well as an auxiliary tool that can be either offensive or defensive. With multiple weapons to collect, you are encouraged to mix and match to find the right combination for the mission at hand. For all-but-one of the missions I participated in, equipping a mid-range gun in each hand with a sword and a third gun tucked away on my pylons was more than enough.

[19659003] Movement on the battlefield is delectably fast and fluid. Whether in the air or skating across the ground, there was never a moment I didn't feel I had total control of my mech and complete awareness of what was happening on the battlefield. Enemy mechs can move around at great speeds, but with proper use of the boost functionality, so can you. Because Daemon X Machina is generous with how it locks onto opposing forces, the only time I saw the mission failure screen was when my strategy for the battle crumbled.

Most of the enemies you'll face are easy targets. Drones and tanks often don't move that fast, don't do much damage on their own, and don't require too many hits before going kablooey. The real challenge you'll be subjected to comes from your fellow mercenaries. More often than not, it'll be you and your squad versus them in a three-on-three fight. If they have all the same abilities as you, though with different weapons, you will often have to outsmart them in order to emerge victorious. However, the enemy A.I. can often be a bit too easy. In many of my matches, I was able to completely wipe opponent Arsenals by keeping them at bay with guided missiles and a powerful melee club.

Not every mission you embark on will be totally worth your time. Some are merely filler that only exists to pay service to the sprawling, disjointed story. Booting up Daemon X Machina is like starting an anime halfway through its run. There are a lot of characters, most of whom you will only spend a fleeting amount of time with. While that does give the impression of a vast network of mercenaries working together in this war-torn region, the scarcity of many faces throughout the campaign negates the emotional impact of their more dramatic moments. Should I really care about the demise of two characters if I know nothing about them? 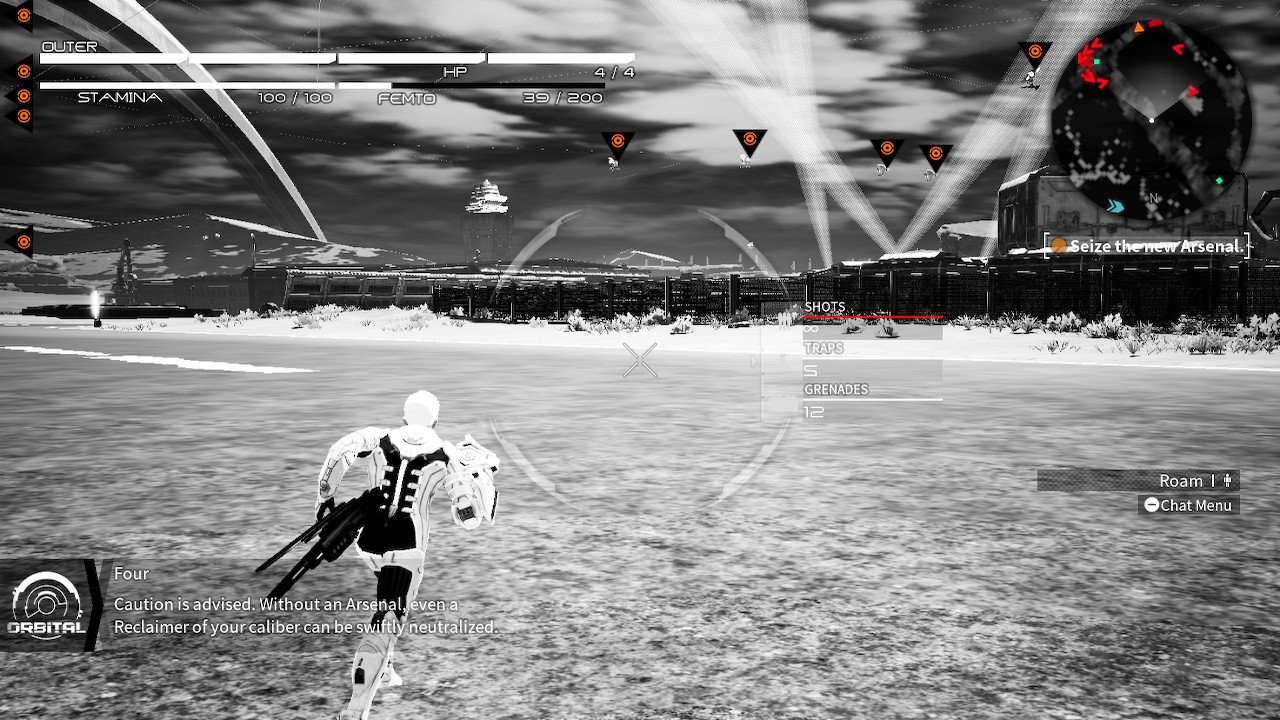 I was also never quite sure what was happening to the rest of Earth as world-building here is kept to a minimum. Often, it feels like the writers were just making it up as they went along, keeping only the key components of mercenaries, corrupt A.I., Immortals, and Femto, the mysterious power source that's key to the Outer Rim, as constants. Not helping this is the decision to make the player protagonist silent. I'm not against the idea of ​​controlling an unspoken hero, but with the way the dialogue and story are written, everything would have worked better if my character got to chime in with their two cents.

The only thing less developed than my character motivation and the world-building is Daemon X Machina 's hub. After each mission, with zero fanfare, you're dumped back into your hub that might also be the hub for every other mercenary, that's never made quite clear. In the hub you have access to your hangar, your missions, multiplayer – which I was unable to connect to during my review period – as well as a lab where you can enhance your character and an ice cream shop where you can buy some scoops for mission boosts. All of this could have been more efficiently handled with a slick menu system, though given how unintuitive some of the menus are present, I wonder if the developers would have been able to pull it off.

Thankfully, very little time is spent puttering around this hub. A quick trip to the ice cream shop is really all you'll need to do before jumping into your next mission. After the feedback from the Prototype Missions demo, it's clear Marvelous First Studios wants players to be piloting around the battlefield as much as possible and I appreciate that. I'm not playing this game for the story or taking pictures of my mech in different poses. I'm here to do battle and between the story missions and optional side missions, there's plenty of opportunity for some hot robot action. Thanks to the mission variety and twists and turns of the story, Daemon X Machina was able to keep me on my toes right up until the final act, when the desire to provide players with a challenging mecha action game took a back seat to tying up storylines. 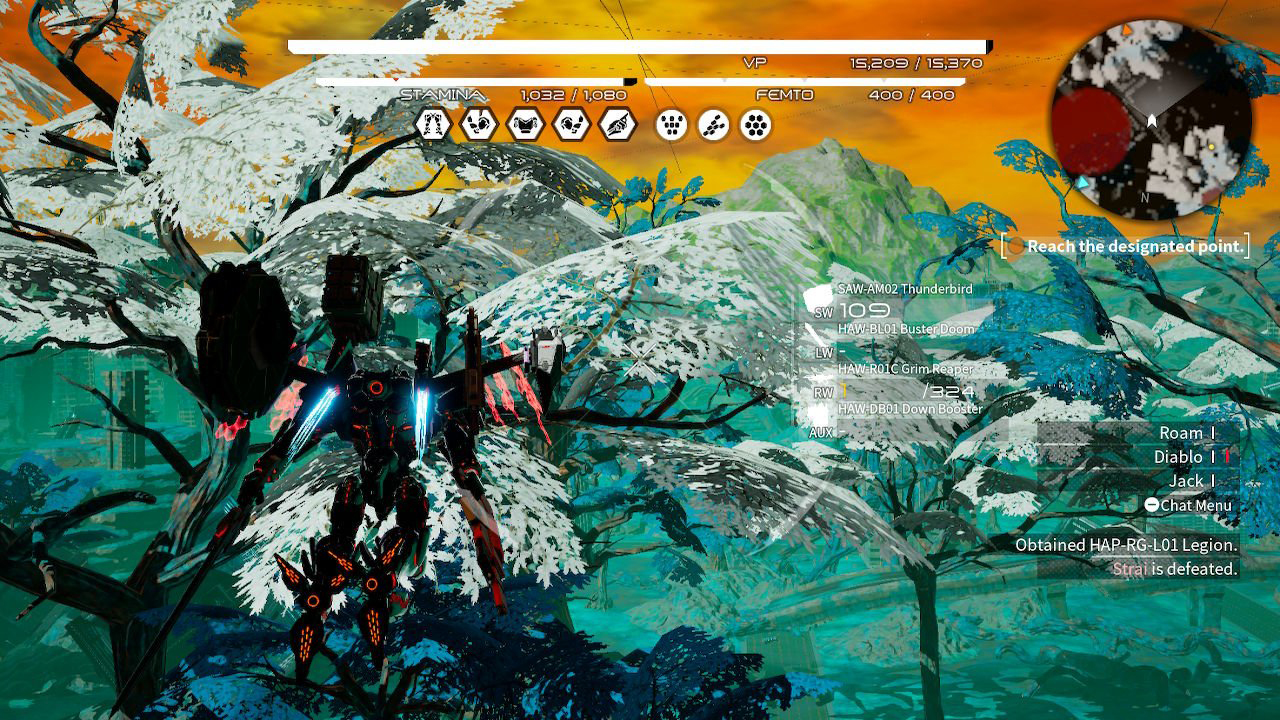 Outside of the final boss battle, which may be one of the most difficult battles I've faced this year, the final set of missions of the campaign is basically playing Daemon X Machina on easy mode. It's not because you're too powerful – unless you're the type to grind side missions for money – but because of the design decisions made by the developers. Not only does the A.I. in these missions falter, with enemies standing still for far too long while taking obscene amounts of damage, but more often then you will not greatly outnumber your foes. The ease with which these missions are completed undercuts the dramatic tension of the plotlines that are wrapping up and undermines the previous 12-to-15 hours players have put into perfecting their Arsenals.

Despite that, the sum total of my experience with Daemon X Machina is positive. The combat is amazing, the game is bright and colorful, the framerate mostly holds up in either docked or handheld mode, and the hangar is great to tinker around in, checking out all the different configurations of my mech. That's what I'm going to remember out of all of this, which is safe for me to say because most everything else in this game is pretty forgettable.

[This review is based on a retail build of the game provided by the publisher.]

Solid and definitely has an audience. There could be some hard-to-ignore faults, but the experience is fun.
How we score: The Destructoid reviews guide