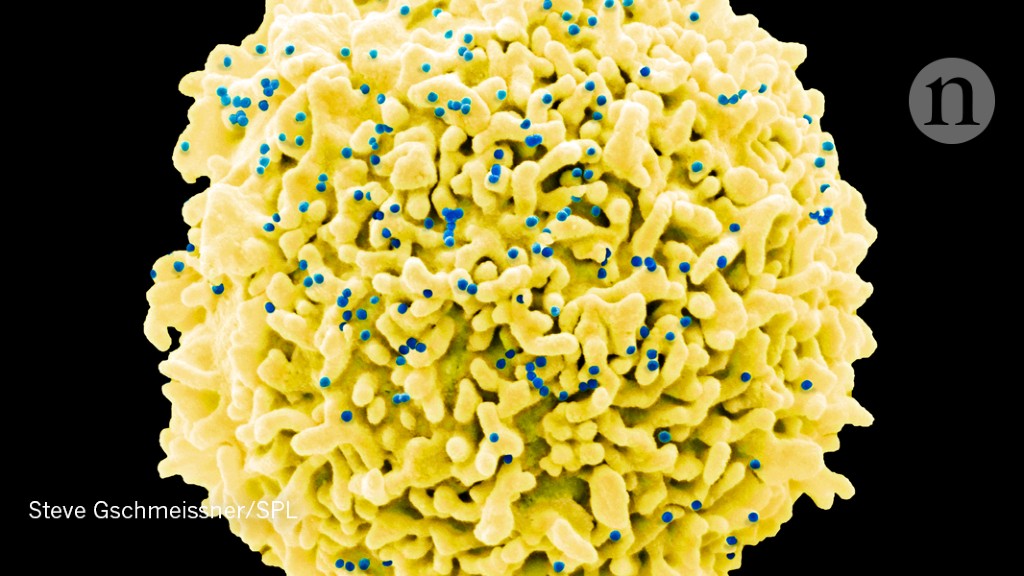 For the first time, researchers have used CRISPR gene editing technology to try to treat a person infected with HIV.

Scientists in China designed human stem cells to mimic a rare form of natural immunity to the virus and transplanted them to a man with HIV and blood cancer. The gene-edited cells survived in the human body for more than a year without causing detectable side effects, but the number of cells was not large enough to significantly reduce the amount of HIV in his blood.

"This is an important step toward using gene editing to treat human disease," says Fyodor Urnov, a University of California, Berkeley biologist. "Because of this study, we now know that these edited cells can survive in a patient and that they will stay there. "

was published on September 11 in the New England Journal of Medicine . states that the research was inspired by a remarkable bone marrow transplant that apparently cured a man of HIV more than a decade ago.

2007, Timothy Ray Brown – originally known as the "Berlin patient" – underwent a bone marrow transplant for However, the bone marrow donor was special in that he had a version of the CCR5 gene that provides immunity to HIV. the gene a receptor on the surface of white blood cells used by the HIV virus to infiltrate cells. However, in individuals with two copies of the CCR5 mutation, this receptor is warped and blocks some HIV strains from entering cells. The HIV-resistant version of the gene is exceptionally rare: it is found in only 1% of people of European descent and is virtually non-existent in other ethnic groups.

Doctors hoped the bone marrow transplant would replace Brown's HIV-susceptible blood cells with immune cells – and it did. After almost 13 years, there are no signs of HIV in his blood, and his leukemia is in remission. In March, researchers reported that a second person underwent a similar procedure in the United Kingdom and was cured 2 .

Deng wanted to use CRISPR gene editing to construct HIV-resistant blood stem cells from normal donors, making this potential cure more widely available. He and his colleagues tested this approach on a 27-year-old man in China who had been diagnosed with HIV and leukemia and who needed a bone marrow transplant. The researchers extracted bone marrow stem cells from a donor and used CRISPR – Cas9 to turn them into CCR5 mutants.

First, the researchers could not get the CRISPR to knock out CCR5 in the stem cells. "I thought, wow, these cells are really tough," Deng says. Eventually they were able to edit 17.8% of the donor's stem cells.

To maximize the risk that the transplant would treat the patient's cancer, the researchers mixed the edited stem cells with unedited ones. The team monitored the man after the transplant to see if the edited cells would survive and replicate, if they treated the HIV infection and, most importantly, if the treatment was safe.

"This was the first trial, so the most important thing was to test security," Deng says.

CRISPR gene editing in humans is still controversial, in part because many researchers worry about the side effects. Studies have shown that CRISPR sometimes creates unwanted mutations in the lab 3 – and the consequences of what happens to a person can be catastrophic.

After 19 months, however, the CRISPR-edited stem cells remained, accounting for only 5–8% of the recipient's total stem cells. This means that just over half of the edited cells died after being transplanted. And even though the man's leukemia is in remission, he is still infected with HIV.

"I am not surprised that 5% was not enough to reduce the viral load," says Urnov, "but now we know that CRISPR-edited cells can persist, and that we must do better than 5%."

For Deng, the most important thing is that the man was not affected by the side effects caused by the gene-editing cells, and when the researchers sequenced the genomes from these cells, they found no evidence of unintended genetic changes.

"This is really good news for the area, "says Carl June, an immunologist at the University of Pennsylvania at Philadelphia." We now know that we can basically use CRISPR to edit human stem cells, that they can exist in a patient, and that it can be safe . "

June says this conceptual concept opens the door for research into testing this technique for the treatment of other blood disorders, such as sickle cell anemia. He also notes that this study of agreed with standard ethical protocols, including obtaining informed consent from the participant.

Improvements to gene editing technology mean that researchers can now edit stem cells with efficiencies greater than 17.8% success rate in the latest study. But it does involve risks. Each time CRISPR cuts down the genome, there is a chance that something may go wrong. Gene editing cells more effectively mean making more cuts and creating more opportunities for mistakes.

"This paper is an incomplete success, but it will only motivate the field to move forward," says Urnov. If the experiment proved unsafe, regulatory authorities may have stopped future research. Now, he says, researchers can point to this study as proof of the notion that this line of research can be safe and potentially fruitful.

"I will have an extra spoonful of ice cream tonight, knowing that the ship's human throughput for treating disease is still underway," says Urnov.