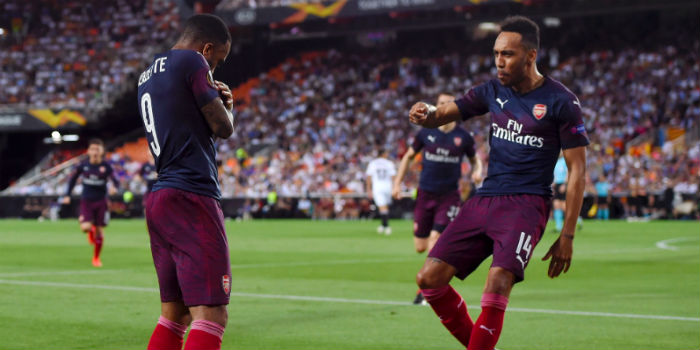 Arsenal will contest their first European final in 1

3 years after Pierre-Emerick Aubameyang grabbed a hat-trick to seal a fantastic 4-2 win in Valencia that sees the Gunners progress 7-3 on aggregate.

Kevin Gameiro puts the hosts in front after 11 minutes as Unai Emery's but wobbled in the opening stages before Aubameyang's brilliant equalizer calmed our nerves. In a see-saw game, Lacazette puts the Gunners in the driving seat with a lovely finish five minutes after the break and Aubameyang made sure of things with a tap in after Gameiro's second had made things nervy again. The Gabon striker then helped himself to an emphatic third with a minute left.

Unai Emery made three changes from side to side with Brighton on Sunday, handing Petr Cech and expected start between the sticks and replacing Mustafi and Guendouzi with Monreal and Torreira. Aaron Ramsey, for the rest of the season with a hamstring injury, was the only absentee from the same 3-5-2 system that we deployed in the 1-0 win against Naples in the away leg of our quarter-final. Mesut Ozil filled the boots of our absent Welsh Jesus

Arsenal looked relatively comfortable in the opening five minutes but it was the hosts who had the early chances. Koscielny blocked Gaya's header from Gameiro's cross to raise the noise from the home fans and Guedes fizzed over the bar inside the first 10 minutes.

Just as we showed some ambition, Maitland-Niles had a shot straight at Neto, Valencia hit us with a deadly counter-attack. Taking advantage of our missing right wing-back, the ball was down the left by Guedes to Rodrigo who cut the ball to Gameiro at the back post to slide home. With only 12 minutes on the clock, it was exactly what we didn't want. (1-0)

The goal put us on the back foot and had Gameiro not accidentally blocked Rodrigo's shot, they'd have doubled their lead inside a couple of minutes. To further shred our nerves, Rodrigo flashed a half volley just wide from distance.

Out of nothing, Aubameyang got us back on level terms. Gabriel had initially tried to clear a long Cech goal-kick but when Lacazette flicked on the loose ball, the Gabon international sprung into action. He took one touch to control and without any backlift, punched a dipping shot from the edge of the box that fits Neto on the bounce. His 26th goal of the season and it was a real gem. (1-1)

The goal definitely took the sting out of Valencia. Aiding matters was the unbelievable work rate of Laca and Auba who not only put on high pressure but then looked to burst away on attack when we had the ball.

Both had chances to extend our lead. Ozil teed up Auba who fired straight at Neto and then Lacazette clipped the outside of the post when his strike partner had burst down the right wing and found him with a cutback. The Mestalla for a second go silent.

We didn't have it all our own way before the break. Parejo's free-kick from 25-yard sailed just wide of Cech's right post and Gaya went looking for a penalty when under pressure from Maitland-Niles. Dutch referee Danny Makkelie had no qualms booking the Valencia full-back for a dive. Quite right too.

Could we avoid the child of nonsense that soured Europe's other football matches this week? Given our away form this season, it's not like we could rest on our laurels. Maximum concentration was needed. Another goal would probably be enough. It came inside five minutes.

Aubameyang picked up a loose ball and burst down the right. He lost it, then won it again before Torreira came to give him a hand. The Uruguayan quickly whipped to a low pass to Lacazette who was prowling around the edge of the box. The Frenchman seemed to get the ball stuck under his feet but somehow swiveled, made space and then curled the ball in. What a goal from our player of the season. (2-1)

Or were we? On 58 minutes, Valencia found a leveller on the night that left them with three goals with 30 minutes remaining. It was a scrappy affair like Gameiro bundled home, mishit shot from two yards out having defied our offside stairs. (2-2)

We needed to weather the storm as the Mestalla found its voice again. Mkhitaryan came on for Ozil who took so long going off that he was booked. As the abuse rained down, the German raised his finger to his mouth as if to say, "pipe down, chaps".

How are your nerves? Garay attempted to make Vincent Kompany the ball home from 30-yards but his effort whistled wide. Sokratis and Koscielny made vital interceptions. Attack was obviously the best form of defense. It's so often is with this Arsenal side. So why not score a third? Yes, please.

Again, Lacazette's hard work started it off. Then it was all down to the brilliance of Ainsley Maitland-Niles who beat his man with quick feet and hammered a low cross for Auba to nick home at the near post. Another beauty of a goal. Out came the front flip. Then he was mobbed. (3-2)

And relax. The home fans started to leave in droves. Emery took that signal to send on Matteo Guendouzi for Torreira. At this point, we could afford to sit back and then hit Los Ches on the break when they committed to forward.

Aubameyang sealed things with a final flourish, combining with Mkhitaryan and then smashing high into the net. What a way to cap one of the most impressive individual displays from an Arsenal player in recent years. Seriously. Take a bow. (4-2)

It's been a horrible couple of weeks for the club. From our capitulation on the domestic front to our neighbors threatening the unspeakable. We need to put all that in a box for a night and just enjoy this for what it is. A great performance. A great result. A great opportunity to end the season on a high.

49ers confident of signing George Kittle to a long-term deal