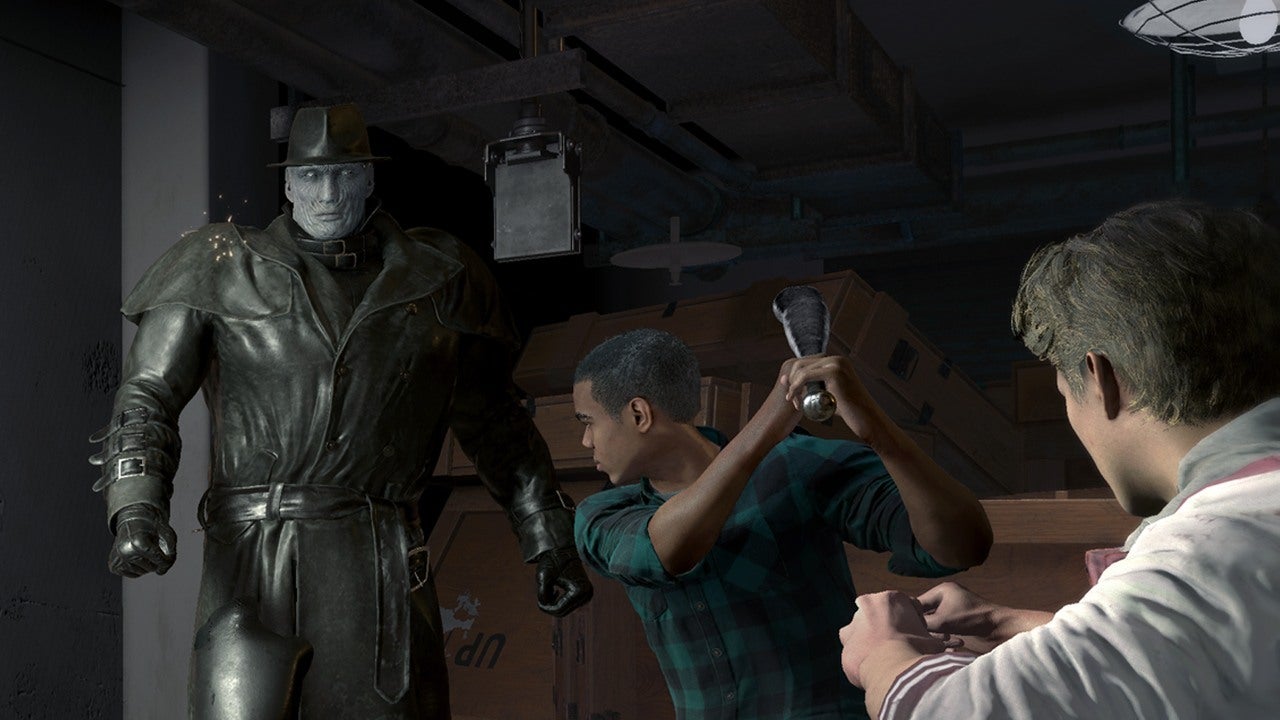 Despite taking place in Raccoon City, you will find Leon Kennedy or Claire Redfield saving the day in the next Resident Evil game. Even so, no denying that Project Resistance is very much ingrained into their world. Darkened corridors are riddled with zombies, obscure puzzle pieces delay your path to freedom, and all the while a sinister figure is watching your every move – a figure that just happens to be controlled by another player.

Before starting my hands-on demo with Project Resistance, Capcom made it clear that this was not as much a full product as it was still an idea – and it's plain to see where that idea was born from: a touch of Dead by Daylight / Friday the 13th's asymmetrical multiplayer, a dash of an escape room challenge gone horribly wrong, with a bit of Left 4 Dead's focus on constantly moving between safe rooms ̵

1; and don't forget the role of an evil mastermind that feels similar to what we once saw in the now-canceled Fable Legends. Project Resistance is all of this and more thanks, culminating in a premise that feels right at home as a Resident Evil experience.

Four “Survivors” must navigate three separate areas and work together to overcome zombies, dodge traps, and locate puzzle pieces or destroy key items to escape before time runs out. However, the survivors aren't contending with just a few wandering corpses – they'll have to stay one step ahead of an evil Umbrella Corporation "Mastermind", another player-controlled entity that not only spies on the scrappy survivors through security cameras, but uses their specific points of view to summon all kinds of zombies, floor traps, and even the mighty Tyrant known as Mr. X.

If the Mastermind can delay his four opponents long enough to run down the clock, or manipulate doors and objects to isolate and take out each of the test subjects, they will win the match. In the four matches I played, each unfolded wildly different from the last thanks to a series of checks and balances between survivors and mastermind. Things got hectic fast, to say the least.

Each side is playing a very different game, with plenty of room for strategies to be formed on both teams. The four Survivors (who look like Resident Evil's messed up version of the Breakfast Club) function similar to Leon and Claire from Resident Evil 2 Remake and each excel in different ways. Valerie (The Healer) can send out a pulse that highlights items to pick up, as well as the invaluable ability to heal the group. January (The Hacker) has nearly essential capabilities that can shut down one of the Mastermind's cameras and slow the rate of summoned horrors. Tyrone (The Tank) can rally his friends to reduce the damage they take, and also let loose a badass stunning kick that can even break the Tyrant. Samuel (The Fighter) is all about offense, and can use melee weapons (or his own two fists) to great effect.

You'll have more to rely on more than just your wits, as the Survivors can outfit themselves with all manner of weapons and items using meager credits at the start of each area (and more can be found by exploring as you move). Guns are expensive and ammo is sparse, but the ability to take out danger at a distance is overstated. Meanwhile, melee weapons like bats can dish out a lot more punishment before breaking, but without backup from a friend with a grenade, a melee attacker can quickly get overwhelmed. As you might expect, your group will only have a chance of surviving if everyone is working together, and it's the Masterminds job to harass and separate the team to pick them off one by one.

The Mastermind (an over-the- top french guy named Daniel Fabron who loooves to taunt) oversees each area by way of checking a minimap and cycling between cameras. While the layout of the areas is randomized along with item pickups and key item locations (a few zombies are also generated on their own), up to the Mastermind to really set the stage using "cards" from a deck of available hazards. You deploy these dangers rapidly while looking through cameras, usually (but not always) stuck to impeding survivor progress indirectly.

Most of these cards cost energy (which slowly regenerates to a maximum of 10), and rooms can only hold so many hostiles, ensuring that the Mastermind will have to think carefully about when and where to enact schemes. Summoning a zombie right in front of the entire group will just be a waste of time and energy, but placing a leg trap around a dark corner with a Licker at the end of the hall, along with several zombies in the tiny room that holds the key, and you'll happily watch pandemonium commence. The mastermind can even further enhance his creations, either by shooting them up with a berserking buff, mounting a temporary turret on your camera, or even taking direct control of a summoned zombie to enact your plans in a more hands-on manner. [19659002] video loading … ” class=”jsx-1406459836 placeholder”/>

Though playing the Mastermind was a lot more difficult to get compared to the familiar third-person gameplay of a survivor, using them effectively is extremely satisfying as the difficulty relies heavily on how well the Survivors adapt to your tricks and work as a team. At first, half the zombies I summoned into the rooms the Survivors ran through were left in the dust as I struggled to keep up. It was only when I started planning several rooms ahead to build trapped rooms that I began to see how to effectively distract my opponents. While a smart group can force you to plan even further ahead, a careless group will help you in a quick victory if you exploit their lack of focus. If one member of the Survivors runs off ahead or straggles behind, it can be all too easy to lock them in a room with an armored zombie, turn off the lights, and watch them go down. Even if they rally together, kick down doors, and revive their fallen teammates, all those delays still work in your favor as the clock runs down.

Here, where Project Resistance uses time as a very interesting mechanic. Although the Survivors start with five minutes to get through all three areas, the clock can be influenced by either party. If the Mastermind sets a floor trap that explodes in someone's face, the Survivors will suffer a small time penalty – but if they spot the trap, communicate, and ensure someone destroys it safely, they will gain precious seconds instead. Once the combination of zombies, traps, and turrets start adding even more variables into play, the clock can quickly turn into a tug-of-war, as a smart and observant team can quickly complete objectives or turn the Masterminds machinations into time bonuses to clinch and win. Similarly, a devious Mastermind can distract opponents from their true goal, trying to keep them scattered and confused as the seconds tick away.

A devious Mastermind can distract opponents from their true goal “

While I was initially worried that I'd have much more fun playing one side over the other, I actually had fun in both. Playing as January, I learned to keep a watchful eye on each corner of the room to look for the red light that signaled the Mastermind taking control, then quickly shutting down the camera before it could be used to summon hazards. When things got dicey by the end of one run, I may have made the tactical decision to throw two of my comrades to the metaphorical zombie wolves and dash to the exit – hey, survivors gotta survive, right?

Still, nothing can quite compare to being able to assume direct control of a monster when playing as the Mastermind. I learned fairly quickly that trying to engage the full group would only turn into a game of keep-away, instead deciding to bid my time until the last area – a warehouse full of corridors and lifts – and wait until one eager Survivor raced ahead of the others. From my camera's point of view, I remotely triggered the lift he was running through to lock up and slowly lift to the second level where the Tyrant I had just summoned was patiently waiting. Without his friends to back him up, I was able to control Mr. X and dash into the defenseless survivor to lift him off the ground uninterrupted, and finally crush his face in. I love it when a plan comes together, especially when that plan lets me play as Mr. X himself.

What interests me most about Project Resistance is where this idea can go. Not sure what will really become of this project, and it seems like Capcom may be thinking along similar lines. With a beta scheduled for next month on consoles, it's clear that Capcom wants its fans to help this idea flourish. Its setup easily allows for a lot more additions – new Survivors, different Masterminds and decks of traps, and more mazes to send the lab rats through. It's not clear yet what kind of beast Project Resistance will mutate into, but the potential is clearly there.

While it's obviously not the fully fleshed out narrative experience you'd expect from something like Resident Evil 8, Project Resistance could easily carve out a welcome space for itself with a potential games-as-a-service model that provides frequent updates – paid or otherwise. The excellent fundamentals of the Resident Evil 2 remake are already here, there is no shortage of Resident Evil creatures, characters, and locales to draw from, which has me all the more excited for could be yet to come.

Brendan Graeber is a Guides Editor at IGN, and may or may not have been clutching a stuffed "This is fine" dog while trying to write the guide for RE7. Chat with him on Twitter @Ragga_Fragga .