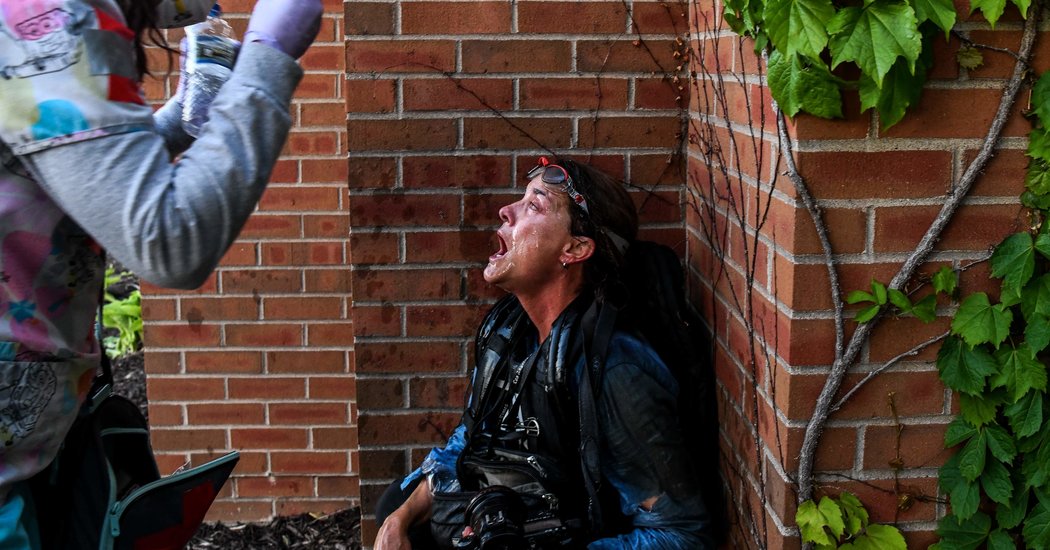 Barbara Davidson, an award-winning photojournalist from Pulitzer, covered a protest near the Grove Mall in Los Angeles on Saturday when a police officer ordered her to move.

She showed him his press information, she said in an interview. The officer said he did not care and told her again to leave the area.

After saying, “Sir, I am a journalist covering this,” Ms Davidson turned to leave, and the officer patted her in the back, causing her to rise and hit her head against a fire post, she said. She was not injured, she added, because she wore a helmet that she had bought while providing skateboard equipment to a nephew.

Ms Davidson, who sells her work through Redux Pictures, an agency that delivers photographs to The New York Times, Newsweek and other news organizations, was among the many journalists who had strained meetings with police during the nationwide demonstrations against racism and police brutality. which has taken place since George Floyd however, in police custody May 25 in Minneapolis.

Many reporters, photographers and press advocates said the treatment of journalists by police in recent days reflected an erosion of confidence in news media that has seeped into law enforcement under President Trump, who has deemed critical coverage of his administration “fake news” and has often tagged some news organizations and journalists with variants of the phrase “enemies of the people.”

“This story in particular, journalists seem to be really targeted by the police,” Davidson said. “It’s not something I’ve experienced before to this degree.”

It is common in autocratic countries for journalists to be arrested during demonstrations and riots, but rare in the United States, where freedom of the press is guaranteed through the First Amendment. In a sign that police would not follow the usual hands-off method, Minnesota State Patrol officers arrested a CNN reporting group live on the air on Friday. The same day, a television reporter in Louisville, Ky., Was hit by a pepper ball by an officer who appeared to be aiming at her while covering the protest on live television.

The arrest of the CNN team received criticism from proponents of the First Amendment and an apology from the minister’s governor, but there have been dozens of other instances of journalists receiving rough treatment in the hands of police officers while covering the protests. In interviews, reporters said they had identified themselves as members of the press before police fired projectiles, pulled their weapons or pepper-sprayed them.

“I’ve really never seen anything like it,” said Ellen Shearer, a professor at Northwestern University’s Medill School of Journalism and a co-director of its National Security Journalism Initiative. “The president has called the news media” the enemy of the people. “I think all of this has taken a toll.”

On Sunday, Trump blamed “Lamestream Media” for the protests in one BEEPcalling journalists “really bad people with a sick agenda.”

Tyler Blint-Welsh, a reporter for The Wall Street Journal, said he was hit by police several times while covering a protest in New York on Sunday. “I backed out as a request with my hands up,” Blint-Welsh, who is black, wrote on Twitter. “My NYPD-released press brand was clearly visible.” (He declined to comment for this article.)

The American Press Freedom Tracker and a writer for the website Bellingcat has each tracked about 100 cases of reporters who were harassed or injured during the protests. Many of the reporters were effectively embedded in protesters and were probably not targeted because they were journalists. But in some cases, journalists were attacked after telling the officers that they were at work.

Hyoung Chang, a Denver Post staff photographer for 23 years, spent a few hours near the Colorado Statehouse on Thursday, taking photos of protesters while wearing his print mark around his neck. In the evening, the police tried to break up the crowd, and Mr. Chang heard what sounded like peppercorns being fired.

“Then a police officer started pointing at me and started shooting,” he said.

Mr. Chang was hit with something in the chest and then in the elbow. Part of his press card was blown off.

“I stayed in the same place,” Chang said, emphasizing that he had been standing near the police for a while while holding cameras and equipment. “I think they know I’m a photographer.”

Ali Velshi, an MSNBC reporter, said he was on his way back from a rally in Minneapolis that had become violent – during which he was hit in the left leg by a rubber bullet – when police stopped him and his camera crew at a cut. With raised hands, the reporter and his colleagues identified themselves as members of news media, Velshi said. A police officer replied, “We don’t care,” Velshi said. A projectile was fired at them, he said, but they were not injured.

Maggie Koerth, a senior science reporter for the site FiveThirtyEight, said she was covering a protest from a sidewalk office in Minneapolis on Saturday when a police officer pulled a weapon on her and another working journalist.

“We said ‘Press, press – we’re press,’ and we held up our marks and put our hands in the air,” she said in an interview. “They pointed the gun at us while we were doing it and one of them said, ‘Shut up. “

Michael Anthony Adams, a Vice News correspondent, said he identified himself as a press member when police arrived on Saturday night at the Minneapolis gas station where he conducted interviews. In a video that Mr. Adams recorded of the incident, he can be heard repeatedly identifying himself as a reporter.

“I don’t care, go down,” one officer replies.

Adams continued to take a video of what happened as he lay on the ground holding his print mark with one hand. Then he was sprayed with what he thinks was pepper spray.

The incident reminded Mr. Adams about being handled by police while on assignment in Turkey this year. “It’s something I can expect in Turkey,” he said of the country where journalists have been imprisoned under President Recep Tayyip Erdogan. “But in America, I wouldn’t have expected it.”

Then there were the arrests. Andrea May Sahouri, a reporter at The Des Moines Register, was sprayed with pepper and handcuffs in zip tapes after identifying herself as a journalist while covering a protest in a Des Moines gallery on Sunday night. She took a livestream video from the back of a police vehicle Sunday night. She was released later.

Christopher Mathias, a HuffPost reporter, covered a protest Saturday night in Brooklyn when an officer bumped into him and said, “Get out of my way!” Mr Mathias said in an interview that he then verbally insulted the official, who turned around and hit Mr Mathias in the abdomen with his baton.

Mr. Mathias was retained and handcuffed. He said he was wearing a press card issued by HuffPost and had repeatedly told police he was a journalist. His case was dealt with in a district around 1 o’clock Sunday and he received a summons.

Mathias said he does not believe that journalists deserve special treatment. But he added that it was unusual in his experience – he has covered protests in Baltimore, New York and Charlottesville, Va. – for the police to mess with reporters and arrest them.

“I don’t think I was originally targeted,” he said. But, he added, “They definitely knew I was a journalist.”

“There is now a culture of impunity for attacks against the press,” said Bruce Shapiro, executive director of the Dart Center for Journalism and Trauma, an organization based at Columbia University School of Journalism. “It is essentially abandoning press freedom as an American value.”

Sarah Matthews, a staff attorney for the Reporters Press Freedom Committee, said that although the First Amendment does not exempt journalists from order control orders, its emphasis on press freedom should offer some protection to those covering demonstrations.

“Journalists are there as representatives of the public, and if law enforcement attacks them, they can’t do their job, and it hurts everyone,” she said.