professor Andrzej Nowak and prof. Grażyna Świątecka decorated with the arrangement of the white eagle 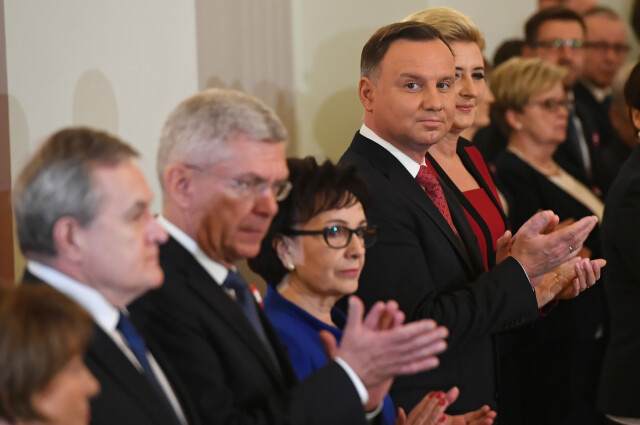 President Monday assigned the order of the White Eagle to historian Andrzej Nowak and Ph.D. professor Grażyna Świątecka on Monday.

The ceremony was held on Independence Day in the Presidential Palace. The President gave two orders of White Eagle.

Andrzej Nowak is a historian, publicist, professor at Jagiellonian University and the Polish Academy of Sciences, author of, among other things, monumental "History of Poland". He was awarded "in recognition of outstanding services to disseminate historical knowledge and disseminate patriotic values, to progress in the humanities and social sciences, and to popularize Polish scientific thought in the world."

He is the author of over 30 books, including" Poland and Three Russia. Józef Piłsudski's Eastern Politics "," The West's First Stocks. 1920 – Forgotten Pleasure ", three volumes" The History of Poland " or "Metamorphosis of the Russian Empire 1721-1921. Geopolitics, Odes and Nations". He has lectured at many universities, including in the US (Harvard), UK (Cambridge), Canada (University of Toronto), as well as in Brno, Tokyo, Dublin, Florence.

He is also an award-winner for many awards, including the Jagiellonian University Rector & # 39; s Outstanding Scientific Achievement Awards (2009 and 2010), three times the KLIO Award for Best Historical Book (1995, 1998, 2001). He was also an award recipient for the "Master" program of the Polish Science Foundation 2011

Grażyna Świątecka is a professor of medicine, cardiologist, creator of the telephone trust center "Anonymous Friend", chairman of the Polish telephone assistant. She was awarded "in recognition of her outstanding contributions to the spread of the notion of sensitivity to other people's needs and selfless help, for progress in the work done for the benefit of the country and for the service of Polish society."

She was the creator and director of the second heart disease clinic at the then medical university in Gdansk. Under her guidance, the clinic has become one of the most important centers in the country working with cardiac electrotherapy. It is the largest center in northern Poland specializing in implantation of cardiac pacemakers, cardiac converter defibrillators and ablation of arrhythmias. Under her guidance many excellent specialists in cardiology were trained.

Professor Świątecka was the initiator of the facility in 1994 of the monthly "Electrostimulation and electrophysiology in the heart", then "Folia Cardiologica", the second – next to "Polish Cardiology" – an important scientific journal in the field of cardiology in our country and the Polish Association for cardiology.

From the time of this writing until 2006, prof. Iwiątecka served as editor-in-chief.

The words of the white eagle are the oldest and highest decoration in the Republic of Poland, awarded for great civil and military merits for the country. They are received by the most outstanding Poles and the highest-ranking representatives of foreign countries.

The scheme is assigned by the President of the Republic of Poland. It is worn on a blue band slung over the left shoulder to the right side. The star of the order, once embroidered, is worn on the left breast.

Decorated by the President

During the same Monday ceremony he was awarded the Grand Cross of the Order of Polonia Restituta :

– Sylwester Porowski – physicist, creator of the Polish blue laser – "in recognition of outstanding qualifications for Polish science, for progress in research in the field of physics and materials technology ".

– Stanisław Michnowski, Warsaw Insurgent – Geophysicist, author of publications in the field of atmospheric electricity -" for outstanding credits for the independence of the Republic of Poland, for advancement in scientific research and reconstruction work by Marian Sodality in Poland after World War II. "

Commander & # 39; s Cross of the Order of Polonia Restituta was awarded:

– Anna Gręziak – activist for the democratic opposition in the Polish People's Republic – "for outstanding services of democratic change in Poland, for achievements in professional work and governmental activities",

– Piotr Nowakowski – vo volleyball player, Polish representative, World Cup medalist – "for outstanding service to the development of Polish sport, for sporting achievements and to promote Poland in the world",

– Roman Zych – activist for the democratic opposition in the Polish People's Republic – "for outstanding service in the democratic change activities in Poland ".

Officer & # 39; s Cross of the Order of the Rebirth of Poland awarded:

– Andrzej Czerwiński – a member of the Polish Red Cross, involved in promoting honorary blood donations – "for outstanding service to people in need of help, to promote the idea of ​​the Red Cross",

– Stanisław Han – entrepreneur in the pharmaceutical industry, physicians in biological sciences – "for outstanding services for development of the national economy and Polish entrepreneurship, for achievements in social activity ".

– Jolanta Jabłońska-Bonca – Professor of Legal Sciences, author of many publications and expertise in the legislative field – "for outstanding qualifications in scientific work, for activities aimed at improving the quality of education in higher education" [19659052] – Wanda Krajewska-Hofman – member of the anti-communist youth organization, activist for "Solidarity" in the eighties, then active in the education and training department of the NSZZ "Solidarność" Mazowsze region – "for outstanding services to the independence of Poland and for democratic change in Poland, for public activity ",

– Krystyna Maciąg – co-founder of the Song and Dance Ensemble of the Medical University of Lublin, organizer of charity concerts -" for outstanding services in popularizing Polish folklore, for achievements in educational and creative work ".

Knight & # 39; s Cross of the Order of Polonia Restituta was awarded:

– Tadeusz Burchacki – initiator and co-creator of many commemorative plaques, memorial stones and monuments dedicated to unique poles and places of national memory, and Maria Gabiniewicz – a long-time employee of the Primate Institute of Polish weddings in the nation and the Secretariat of the Primacy of Poland – "for outstanding services to cherish the memory of Poland's recent history",

– Alicja Klich-Rączka – Head of the Polyclinics prisoners in German concentration camps and Children of the Holocaust – "for outstanding services in social activity and for health protection, for dissemination of historical knowledge",

– Cezary Kuklo – historian and demographer, professor at the University of Bialystok – "for outstanding achievements in scientific and research and didactic work ",

– Father Kazimierz Niemirka – Siedlce chaplain police, i involved in the construction of the charity and pastoral center in Siedlce – "for outstanding service in pastoral work, for activities for the benefit of the local community",

– Jerzy Wojciechowski – an expert on jazz music hey, organizer of the concert series" Jazz at the Museum "and the festival" Museum Jazz Festival "-" for outstanding services to promote Polish music culture, for activities for the benefit of the local society ",

Commander & # 39; s Cross of the Order of Merit of the Republic of Poland was awarded:

with Medal of the Century of Regained Independence for "merits of independence" awarded:

– Mateusz Szpytma – Historian, co-creator of the Museum of Poles who saved Jews during the Second World War on behalf of the Ulma family in Markowa, Vice President of the Institute of National Remembrance.