I wanted to be a priest and a husband 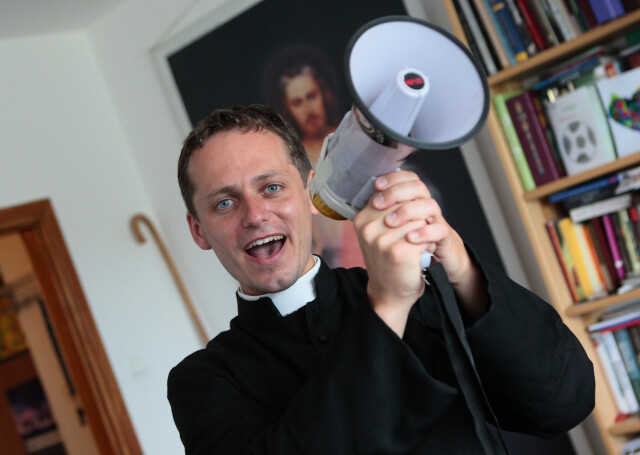 I fought hard, I went to the bishop, I said I did not believe I fell in love, he moved me to the next congregation, then came some friendship, clean, without intercourse. The conditions lasted for years. It was a great suffering, because you can't touch the girl, go hand in hand – said Michał Misiak on the recording, where he talks about the reasons for his excommunication. He explains that a "conflict between celibacy and a desire for the heart, a desire that is not related to sexuality, but a concern for a woman struggling for her, protection and love, carries her arms" grew in him.

Lodz's bishopric announced that the priest Michał Misiak imposed the punishment of excommunication latae sententiae (excommunication binding by the law itself, which was hit by the fact that a crime is committed, if the law so prescribes) and was removed from church offices.

As explained in the recording on social media, Father Remigiusz Recław, the pastor's last priest, was the cause of the excommunication the fact that those priests received the second baptism" as the Protestant gave him ". – The adoption of a second baptism by a Catholic causes him to be punished by excommunication from the machine – the Jesuit explained. He added that the priest Misiak confirmed that he did not renew the baptism, but he was again baptized.

"My heart is still Catholic"

On Tuesday, at Michał Misiak's account, seven films were published on one of the social media where he talks about the causes of his excommunication

– This is not about baptism, It is not about the Catholic Church. I love the Catholic Church, and in fact I have not been removed from any church, I am in the Church, I love the Church, he says. He adds that he is not a Protestant or an Orthodox, according to the law, he is neither Catholic. – But my heart is still Catholic. And this heart does not protest, it is gratitude, a powerful hope, wake up and love long, a great love that urges me to live in truth. The truth is the cause of this confusion – he emphasizes.

– Throughout my youth, such defensive mechanisms that have replaced all sexuality and impurity have become attached to me – he explains. Total drought, that I need proximity, relationships. I will be a priest and the priest lives in celibacy and I must live as a priest – he says.

He admits that when he became a priest, he locked up everything. "- What was blocked in me, frozen – the desire for family, marriage, relationships, love of love – suddenly God locked it up – he emphasizes.

– I have had a great fight all these years, I really wanted to love, as every man called by God to create one with a woman, to be a body, to go against marriage, says the Bible, he says.

"Conflict between life in celibacy and the heart's desire"

Misiak explains that there was a growing conflict between celibacy and lust, a good wish, a wish that was not related committed to sexuality, without concern for a woman struggling for her, protecting her and her children and carrying her arms ". – I fought hard, I went to the bishop, I said I did not believe I fell in love, he moved me to the next parish, then came a friendship, clean, without intercourse. The conditions lasted for years. It was a great suffering, because you cannot touch the girl, go hand in hand – he says.

As he says, celibate contains "not really the priesthood". – It is not that everyone called to God's service must live in celibacy. This is not the law of God, it is human right – he points out

Misiak claims that six years ago he began writing letters on his behalf to Pope Francis. – Every year I sent letters, because there was no answer – he says.

He adds that he spoke honestly with his bishop. – I groaned, cried, went to trust. A year ago I presented this belief: I want to be a man! –

United States: Donald Trump has suspended the conference. Shootout in front of the White House