Evo Morales leads the first round of presidential elections 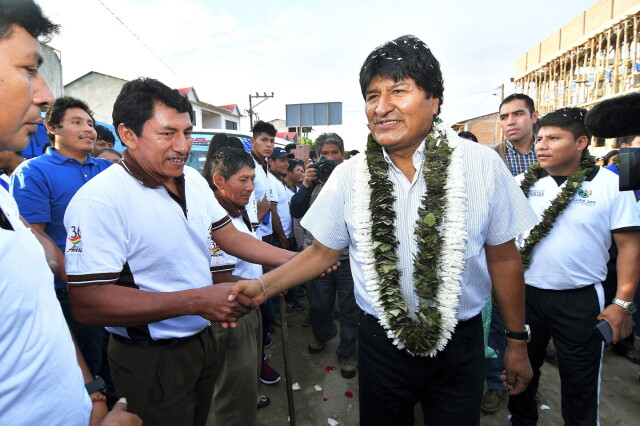 After counting 84 percent of the votes in the first round of presidential elections, the Bolivian authorities suspended the publication of further preliminary results. Observers require a justification for the decision. The results so far indicate the need for a second round, and this is a whole new situation for the current President Evo Morales.

The results published by the Supreme Electoral Court on local time on Sunday showed that Bolivia's current president Evo Morales was voted 45.71 percent. voters, and for his rival Carlos Mesa – 37.84 percent Such results would mean that the person holding the highest office in the state will choose a second round, scheduled for December 15.

Chairman of the Supreme Electoral Court Maria Eugenia Choque stated that the information so far was only preliminary and that the final official vote count begins. Waiting for the final results can take several days.

However, observers from the Organization of American States (OPA) appealed to the Electoral Court to explain why it halted further publication of preliminary results. The organization in a Twitter communication considered that providing justification for this decision is "key".

The Office notes that a possible second round of elections would be for 59-year-old Morales, leader of the Socialism movement (MAS), a whole new situation, because since 2006, when he reached the state's highest office, this left-wing politician always won in the first round; To make it happen again, it must get over 50 percent votes.

Despite these results, Morales, who is fighting for the fourth term, has already declared victory.

In turn, Mesa, a center-right candidate who also once had the President of Bolivia, on Sunday, considered that the electoral authorities are trying to manipulate the number of votes. In his view, by suspending further disclosure of preliminary results, the Bolivian Supreme Electoral Court "once again" fails to fulfill its obligations. – We will not accept cheating on the vote that leads us to the second round – stressed politicians.

The weaker-than-usual Morales results could have resulted from the deteriorating economic situation of Bolivia's 11 million to bypass the constitution and expand governments.

According to Art. 168 of the Bolivia Constitution, it is possible to hold the President for two terms. In 2013, the Bolivian Supreme Court ruled that Morales and his vice president Alvaro Garcia Linera could apply for a third term because this article was amended after the election.

In a referendum, organized on the initiative of Morales, which dreamed of a fourth term, 2016, voters voted against amendments to the regulation that would allow him to apply for another term. However, the final decision in this case was again taken in 2017 by the Supreme Court, which decided that there are no legal contraindications for Morales to take part in the elections for the fourth time.

Opponents of Morales indicated that in 2014, when he applied for the third term, he solemnly promised that the period 2014-2019 would be his last.

The electoral questions for 10 elections indicated a 10% advantage over Morales compared to Mesa, who also once held the President of Bolivia, when in 2005 he was removed from the office of President Gonzalo Sanchez de Losada, current leader of the Civic Community (CC). Mesa took over the leadership of the agency because he was then vice president.

Play: "Historical error". Head of EU diplomacy after the summit

Federica Mogherini criticized the European Union's failure to initiate accession talks with Albania and northern Macedonia. It is …
read more »

Play:" This is not a protest, this is a crime "

On Sunday evening in the capital of Chile, Santiago, there were further protests despite the curfew, which has been in effect ever since. ..
read more »

Play: First the head of the Pentagon, then the speaker of the House of Representatives. Americans in Afghanistan

To assess the situation in Afghanistan, where after the peace talks with the Taliban almost every day …
read more »

Play: Results negative for the president. Their administration was canceled

After counting 84 percent of the votes in the first round of presidential elections, the Bolivian authorities stopped publishing …
read more »

President Recep Tayyip Erdogan does not say e-cigarettes in Turkey. In his opinion, tobacco companies enrich themselves by poisoning …
read more »

Play:" We must protect the synagogues as an eye in our heads "

In front of the main synagogue in Berlin, over 200 people formed a human chain on Sunday to express solidarity with Jews after. ..
read more »

Play: Half naked, flooded with artificial oil. Protest in the Art Gallery

104 detainees, including 28 arrested on arrested – this balance sheet after seven days of riots in Catalonia said on Sunday …
read more »

According to the SRF broadcaster's subsequent forecast, both the green parties report a significant increase in support on Sunday …
read more »