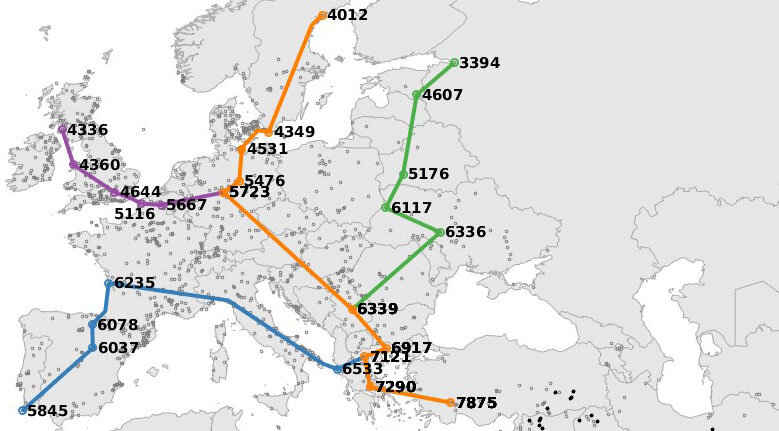 The research, a collaboration between the University of Roehampton, the University of Cambridge and several other institutions, combined archaeological data with paleoclimatic reconstructions to show for the first time that the climate dramatically affected the migration of people across Europe, causing a dramatic slowdown between 6,1

The research team, including Dr. Lia Betti, a senior lecturer at the University of Roehampton, compiled a large database of the first arrival dates of Neolithic farmers across the continent and studied the rate of their migration in relation to the current climate reconstructions. They also analyzed ancient DNA data to understand the interplay between early farmers and local hunter-gatherers.

They discovered that migration began rapidly from southeastern Europe, with Neolithic farmers driving out the existing hunter-gatherer population. This was demonstrated by how little DNA from the two groups was mixed. When they moved north, the climate became less suitable for the crops they had bought with them. Their rate of movement decreased and changed how they interacted with local hunter-gatherers, which can be seen by increased genetic mixing of the two groups.

To test that climate was the key factor causing the slowdown in migration, the team used paleoclimatic reconstruction to calculate the number of Growing Degree Days (GDD) for the areas that farmers encountered during their expansion. GDD is usually used in agriculture as a measure of the heat available during a year for the crops to grow. Enlargement slowed down along different migration routes as early farmers reached regions where the number of GDDs was less than required to support the original crop package. This conclusion is further supported by the fact that the only road that had not slowed down in the expansion was along the Mediterranean, suggesting that those moving along that road could continue to expand rapidly in the favorable warm climate.

Comparing ancient DNA data from local hunter-gatherers and early farmers, the authors also showed that the challenging climatic conditions for agriculture in Northern Europe led to closer relations between the two groups and higher mixing. Exchange of goods and local hunting skills may have enabled the first farmers to continue in these regions despite poor crops.

This research shows how climate has affected the migration of people since the beginning of our history. The climatic suitability of places to live and settle played a key role in determining where different human groups could thrive, which in turn changed the genetics of entire continents.

Dr. Lia Betti, University of Roehampton, said: “This study required a huge amount of work to aim through hundreds of archaeological articles, books and reports in different languages ​​to build a detailed model for the expansion of agriculture in Europe. We are very proud that our database will now be available to the scientific community and the general public to facilitate future research, and we have also come up with new methods for identifying the main avenues for past human migrations and for determining whether the climate had a significant impact, which we hope will allow us to investigate the causes behind prehistoric migration waves in other areas of the world.

Increased interaction between Neolithic migrants and hunter-gatherers in Western Europe

Provided by the University of Roehampton

Quote: New research shows that climate was the key factor influencing the movement of the first farmers in Europe (2020, July 16) which was retrieved July 16, 2020 from https://phys.org/news/2020-07-climate-key-factor-impacting -movement.html

This document is subject to copyright. Apart from all fair dealings for private studies or research, no part may be reproduced without written permission. The content is provided for informational purposes only.