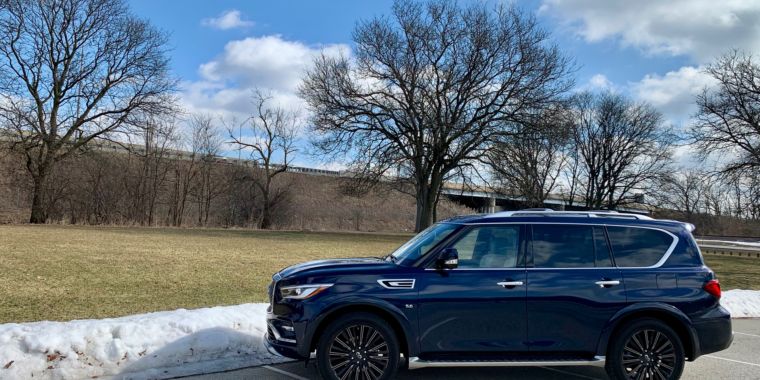 As the old saying goes: you never get a second chance to make a first impression. When I climbed into the Infiniti QX80 for the first time, one of the first things I saw was a monochromatic LCD display smack-dab in the middle of the instrument panel. It looked like the Monroney sticker was sitting on the passenger seat and saw a price tag north of $ 90,000. The juxtaposition of a display that would look at home in the decade-old cars in my garage with the luxurious interior trim left with the impression that Infiniti made some odd choices with the QX80 ̵

1; an impression that I never managed to shake in my week with the vehicle

The QX80 is the flagship of Infiniti's SUV lineup. It's a true full-size, three-row SUV, competing with the Mercedes GLS, Lexus LX, and Lincoln Navigator for the hearts and wallets of large families and folks who want a massive, spacious vehicle to tool around. The QX80 underwent an overhaul for the 2018 model year, getting an exterior redesign that elongated the body and made it appear longer. For 2019, Infiniti added a Limited model with dark, machine-finished 22-inch wheels.

The impression of an Armada

From a distance, the QX80 might easily be mistaken for a Nissan Armada with a $ 25,000 cheaper price tag. That's no surprise — the cars share the same platform and profile. The most obvious differences are the angle of the front grille, the badge in the middle, and the shape of the chrome trimmed vent on the front quarter panel. The QX80 is not as heavy on the Infiniti design language as its smaller compatriots. There are fewer curves, and the profile is more and more angular.

With a 121.1-inch (3.073mm) wheelbase and dimensions of 210.2in × 79.9in × 75.8in (5.333mm × 2.032mm × 1.925mm), the interior of the QX80 is spacious and has all of the high-end touches you would expect from a car with a price tag of north of 90 grand. There are loads of light gray wood trim, black Ultrasuede headliners, and embossing on the first and second row seats. Second-row passengers will love the expanse of legroom, heated seats, their own climate controls, USB ports, and displays mounted into the headrests of the front seat (with the theater package). Third-row passengers? They'll be disappointed unless they're short. While getting back there is easy, thanks to quick-release buttons on the dashboard, the seat is positioned closer to the floor than the others, leaving passengers feeling unnecessarily cramped.

While the car looks luxurious on the inside, it also feels dated, and Infiniti has made some puzzling design choices. First and foremost is a monochromatic LED display between the analog dials. 2019 vehicle, let alone one that starts at $ 65,000. Aside from the looks, the use of a monochromatic display involves some UX tradeoffs. Want to check your fuel economy or even your compass heading? You need to reach out to the touchscreen infotainment display — with Infiniti's dated-looking UI — and navigate through a couple of screens to find the info.

The center console and dashboard still feel cluttered, although not as much as the QX60 and its 60 buttons. Infiniti's insistence on a single touchscreen and dedicated controls for many functions you will need to hunt and reach when you're behind the wheel. Down by the right knee are the liftgate, steering-wheel heat, and audible-warning controls. The temperature controls for the seats are so low that you can only count on a glance if they are at night or on a darkly overcast day. And there's a lovely analog clock in the center of the dashboard … right about belly button level. Altogether, the set-up is off-putting

Lumbering down the road in comfort

On the streets, the QX80 provides quite a comfortable ride. Step on the running board and pull yourself into the driver's seat and you're rewarded with a commanding view of the highway, compromised only by a fairly large C pillar. The ride is quiet, and the fully independent double-wishbone suspension effectively insulates passengers from rough stretches of pavement. The 5.6L V8 does a fine job of moving this nearly 6,000lb (2,721kg) SUV around. It is fast enough if you need to accelerate to make a sudden change, but this is a SUV built for comfort, not for speed.

version, and it does a decent job of limited body roll in tight curves. That said, it's still a three-ton SUV and should be driven accordingly. While most QX80s will stick to suburban streets and the highway, it has the ability to go off-road if you need it, with 9.2 inches (23.4cm) or ground clearance and 4WD high and 4WD low drive modes. The QX80 also has a snow mode (which I appreciated during this frigid Chicago winter), hill-start assist, and tow mode for loads of up to 8,500lb (3,855kg).

Fuel economy is about what one would expect from a full-size SUV with a V8: 15mpg (13mpg city, 19mpg highway). I got 13.4mpg in a week of mixed winter driving.

Although the QX80 was refreshed for the 2018 model year, it is missing ProPILOT assist, which is found in the QX50 and really does a nice job keeping you centered in your lane and following the contours of the road. Instead, the QX80 has the lesser ProActive package, which will chime at you when you run out of your lane. The blind-spot warning lights are actually the bottom of the A pillar instead of in the side mirrors, which lessens its utility. On the plus side, the QX80 has a 360 ° camera view that can be shifted from camera to camera via the infotainment display, very useful for maneuvering this massive SUV into tight quarters.

After spending a few weeks behind the wheel of various Infiniti SUVs, I understand their appeal to a certain segment of the car-buying public. They offer quiet, comfortable, and sedate rides — and they are generally a few thousand dollars less than a BMW, Volvo, or Audi. But Infinitis — and especially the QX80 — feel technologically backwards. ProPILOT assist works very well, but it's only available in the QX50. The infotainment system feels dated, and the sheer number of buttons and knobs that sometimes work in conjunction with the infotainment system makes for a steep learning curve. For the QX80, my lasting impression is not very different from my first one — it's a pricey, full-size SUV that falls short in some important ways.