Breaking News
Home / Business / Over 4,000 shipyard workers are on strike in Maine

Over 4,000 shipyard workers are on strike in Maine 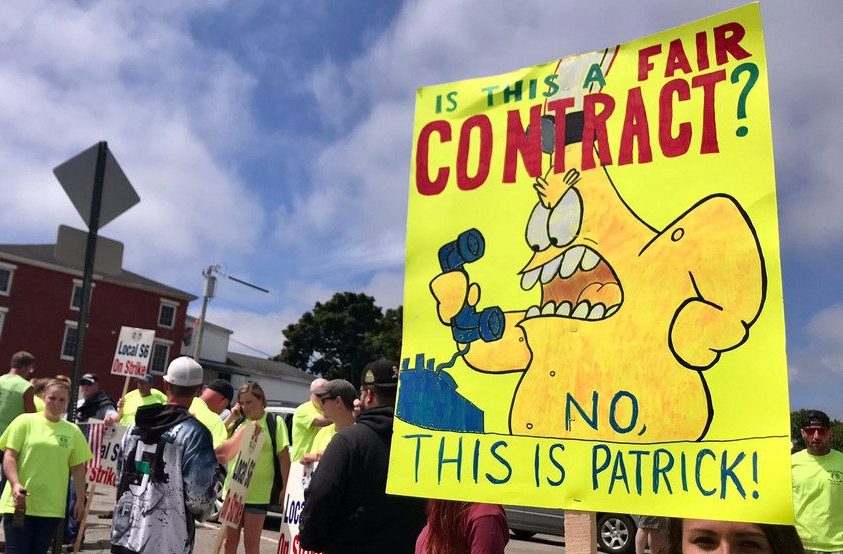 About 4,300 members of the International Association of Machinists and Aerospace Workers, Local Lodge S6, are on strike against Bath Iron Works (BIW) in Bath, Maine. Workers voted by an overwhelming majority of 87 percent to strike when their current contract expired at midnight June 22.

“Nearly 90 percent of our members voted, and almost 90 percent of them not only rejected the contract, but they approved the strike,” says Tim Suitter, the union’s spokesman and twenty-two-year veteran sandblaster. “The strike was run by the younger workers.”

Management requires concession contract language that would give them the freedom to work in more temporary work without unions and keep more and more workers at the starting level of $ 15.97 per hour – to lower wages in the yard on average, especially for new employees with previous training and experience. BIW President Dirk Lesko called on new hires, claiming that the yard needs more flexibility to complete marine contracts, despite hiring about two thousand temporary subcontractors over the past couple of years. This is the standard management argument of the twenty-first or some other century – one that union members, surprisingly, do not buy.

“They want to be able to get subcontractors and get them to do my job and get me to do somebody else’s job,” says Suitter. “According to our previous contact, they could get subcontractors, but they had to go through a joint process, they had to present it to the trade union and it had to meet certain criteria. But they don’t have to. Most subcontractors are non-union. … The management thought they could just go right, but you saw a big increase from the younger shipbuilders who said, ‘This is not right. We are not going to roll over and let them take all the protection we can expect and want when our bodies begin to break down the more years we spend. “

The shipbuilding industry is dangerous and cruel work, so trade union power is crucial for long-term workers. “I could have been on the second shift for twelve years, even with a family, and finally due to seniority has the opportunity to come on the day shift,” Suitter points out. “But now they can say: ‘We need that skill, we need you to go back to the second shift. We will move you to this facility or facility without any limitation. “

The Union in the private sector, especially manufacturing, has been declining in recent decades. More than wages and benefits are at stake in this fight.

“It’s a physical job. People put thirty years in, it’s a long career. And during the career they’ve had operations, the body breaks down from working on steel all day, explains Suitter. “I’m a sand blaster. I remove rust, primer, paint, what do you have and clean it to bare metal. We use large industrial blasts with two inch tubes with steel bulkheads. “

The company’s “final, best and final offer” included a $ 1,200 signing bonus and 3 percent annual increases under the terms of the three-year contract. But it also demanded increased health insurance premiums, deductibles and collaboration by 5 percent.

BIW is Maine’s fourth largest employer and one of the US Navy’s largest shipbuilders, drawing workers from all sixteen Maine counties from Kittery to Aroostook. Founded in 1884, generations of union members have worked on the shipyard, where the Kennebec River enters Maine Gulf in Bath about forty minutes north of Portland. General Dynamics, ranked number ninety-two on the Forbes Fortune 500 list in 2019, bought BIW in 1995 and has long sought to lose the union.

While union members agreed on concessions in 2015 and 2016 that provided planned one-time bonuses to lower costs and help the company secure more government contracts, General Dynamics has been riding high on the pigs. As IAMAW International President Robert Martinez, Jr. wrote in a letter to President Trump, the Tax Reduction and Jobs Act 2017 lowered the company’s effective tax rate from 28.6 percent in 2017 to 17.8 percent in 2018. With this case, General Dynamics significantly increased share repurchases and dividends, giving nearly $ 2.9 billion to its shareholders in 2018 alone. ”This comes on top of a $ 45 million tax authority in Maine.

After pledging to negotiate in good faith, the management drew their feet during the first two weeks of the strike and is now playing hairball, shutting off health insurance for local S6 members, dismissing about 220 members of the local S7 sister union and calling in strike breakers, “set up our subcontractor, “as Lesko put it in a letter on July 2.

“The company said they need an answer [to negotiations] it will enable them to succeed, IAM Local S6 President Chris Wiers responded. “The use of subcontractors will not succeed. They must listen to the workers. They know how to build the ships. “

The Southern Maine Labor Council organized a caravan to support the strike in Bath, and local unions have visited fence lines and donated to the Union’s strike support fund. It looks like the two sides have been dug in for a long fight.

This is not the first time. In 2000, LS6 members fought for fifty-five days before wrestling the company with a draw. Alvin “Doug” Hanks, sixty-three, a veteran of the 2000 strike has worked at BIW for nearly 33 years, explained to local media that he is on his way back to defending the younger generation: “It’s time we showed America America that they can’t just replace the hard workers and keep this country going. “

The company’s low priority on worker safety was driven home during the early days of the Covid-19 pandemic. Trade union members called for the shipyard to close, but the company finally refused to give workers two weeks of unpaid leave if they were worried about the virus. Rob Hopper, a six-year-old BIW employee who continued his work, told local media: “With a son with epilepsy, you never know what will happen. For me, it wasn’t worth the risk. “

On March 24, only 41 percent of workers reported changing after the first case of Covid-19 was discovered at BIW. After a second worker tested positive, office employees at BIW asked to be allowed to telecommunicate, but management refused, with claims of “national security”. After Governor Janet Mills complained that BIW did not take adequate precautions, the management led workers to the CDC’s website for instructions on how to make a mask, and wrote: “Some examples of acceptable facial coatings are bandages, scarves, pieces of fabric that are kept in place with elastic and ski masks covering the mouth and nose. “

As the contract deadline approached, union members on the tire plate “began to show their frustration at what we call ‘putting the hammer down,'” says Suitter. “It was really the younger kids that got going and carried it right ahead and they would put the hammer down for a minute. every hour of the hour by turning on steel. “The management responded by interrupting the workers.

Jami Bellefleur, a BIW painter of seven years, told local media that she was turned off after hammering on scrap metal and ordered to sit vacant in the yard’s labor office. “We sat there for three hours on Friday afternoon and then sat there for seven hours on Monday afternoon. We have been told by our national legal team [that putting the hammer down] is a protected act. “The union defended all the suspended workers and won them back wages for the time they lost.

Local S6 members are determined, but the management shows few signs of support. Trade negotiators met with federal mediators this week, and company representatives will do the same in the coming days. Three weeks before, workers are hanging tight on the fence lines, but they will need the support of unions across the country and the people of Maine to win.

BIW was previously an employer selected for workers throughout Maine. General Dynamics wants to break that tradition and force its employees into a race to the bottom. The only thing that is strong enough to stop them is union solidarity.

As Suiter puts it: “Bath Iron Works is owned by General Dynamics, and they don’t care about the people who work for the yard or the state for that matter. It’s the same story, blame the workers. Our members saw that they were literally trying to break the union. But we put our feet down until they get the message that we’re not going away. “

Protect yourself before your federal student loan change changes