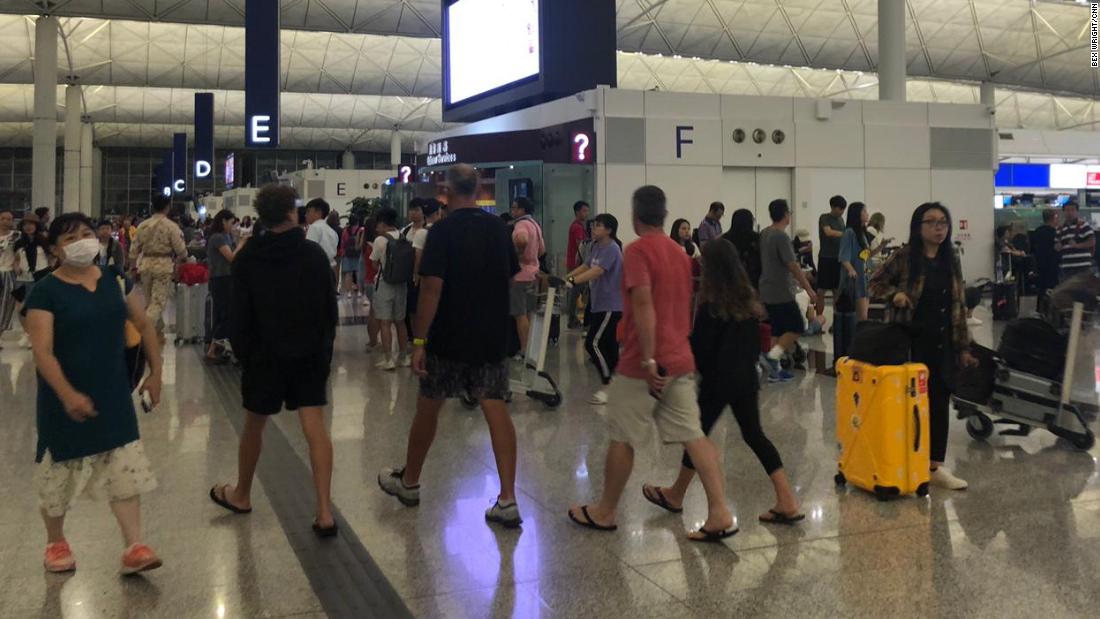 Five people were arrested and six were hospitalized, authorities said, following chaotic and often ugly scenes at the airport Tuesday night, the latest escalation in what has become an increasingly volatile political crisis.

Chinese government authorities strongly condemned the protesters Wednesday, describing their actions as having "broken the bottom line of the law, morality and humanity."

"They committed serious violent crimes under public gaze, which is horrific and chilling. Their behaviors show extreme contempt for the rule of law," said Xu Luying, a spokeswoman for China's Hong Kong and Macao Affairs Office.

Earlier this week, Chinese state media also circulated video purporting to show an increased military presence in the city of Shenzhen on Hong Kong's border. However, there has been no indication that troops are set to be deployed.
The protest movement began in early June in opposition to an extradition bill, which critics fear could be used to target dissidents in Hong Kong for prosecution in mainland China. The bill has since been shelved, but the uproar stoked a wider civil unrest that shows no sign of abating.

With tensions high, protesters surrounded a man they claimed was a mainland Chinese police officer who had attempted to infiltrate the protests. China's Hong Kong and Macao Affairs Office identified the man as Mr. Xu, a Shenzhen resident who had traveled to Hong Kong airport to see off a friend.

Paramedics treated the man after he appeared to faint, but protesters would not let them evacuate. A tense, hours-long standoff ensued before police arrived and helped first responders get the man to the ambulance.

Riot police arrived shortly after, only to retreat. But a brief clash ensued with uniformed police during which one protester was filmed attacking an officer from behind and grabbing his baton. The officer grabbed a gun from his holster in response, but did not fire it.

Demonstrators also detained and tied a Chinese national to a luggage cart. The man was later identified as a reporter from Global Times, a Chinese state media tabloid, by the paper's editor-in-chief. Both he and Mr. Xu are still in the hospital, Beijing said.

In a press conference Wednesday, police accuse protesters of assaulting and imprisoning one man, and preventing medics from assisting him. Mak Chin-ho, assistant commissioner of police, told reporters that some protesters made "roadblocks and used laser pointers" to stop police meaning "it took a few hours to reach the injured man."

Mak said one police officer pulled out a gun in defense after "protesters pushed him into a corner to beat him up, and grabbed his pepper spray and baton."

Police warned that carrying out illegal activities at airports could incur heavier penalties up to life imprisonment.

As airport operations began Wednesday, scars from Tuesday night's unrest were still visible as staff worked to remove stains from the floors and graffiti from the walls.

The airport announced that officials would start checking boarding passes and passports at the entrance of the departures hall from 2 p.m. (2 a.m. ET) on Wednesday.

Timothy Wu, corporate communications assistant manager at Hong Kong International Airport, told CNN that only the department's entrances would be monitored for now. Two of the entrances were closed, and only two remained open.

More than 74 million passengers traveled to and from the airport last year. It handles 1,100 passenger and cargo flights each day, and serves about 200 destinations around the world.

Airport authorities announced Wednesday that they obtained an interim injunction allowing them to restrain people who are "unlawfully and willfully obstructing or interfering with the proper use or Hong Kong International Airport. " The injunction will likely help airport authorities prevent a repeat of Tuesday.

A city on edge as apologies issued

On Wednesday, protesters began issuing apologies for the disruption caused at the city's airport Tuesday night.

Numerous statements posted in a private messaging channel used by protesters expressed remorse and appealed for understanding. "We apologize for our behavior but we are just too scared," read one post. "Our police shot us, government betrayed us, social institutions failed us. Please help us."

Another message directly addressed different groups: "To all the reporters, ambulance staff, airport staff, and affected passengers, we would again like to express our deepest apology to all the inconvenience and disruptions. "

The messages, which were issued anonymously, come as Tuesday's violence was given prominent coverage across mainland Chinese state media.

China has adopted a more strident tone in recent times weeks focusing on violence and framing the protest movement as one of radical separatists being controlled by foreign "black hands." On Monday Chinese authorities said the situation in Hong Kong had "begun to show signs of terrorism."

But the protesters are by and large young, angry and leaderless. They complain that the government has continued to ignore their five demands, which include calls for universal suffrage and investigations into alleged police brutality and misconduct.

Hong Kong leader Carrie Lam has repeatedly apologized for her government's botched handling of the extradition bill that sparked the protest and vowed to do a better job of listening. But she said the political issues will only deal with after-law and order summaries.

"The Chief Executive's responsibility is to ensure that Hong Kong remains a safe and orderly and law-abiding city. That is my utmost responsibility," Lam

"After the violence has stopped and the chaotic situation that we are now seeing could subside – I wouldn't say it will be eradicated totally – I, as the Chief Executive, will be responsible to rebuild Hong Kong's economy, to engage as widely as possible, to listen as attentively as possible to my people's grievances and try to help Hong Kong move on. "