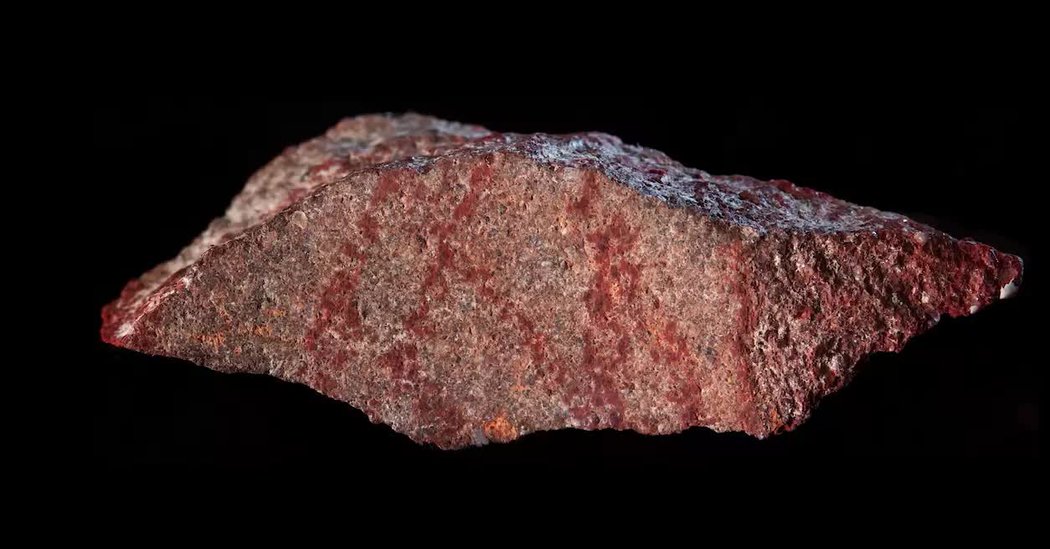 Nine red lines on a rocky stone found in a South African cave can be the earliest known drawing by Homo sapiens, archaeologists reported Wednesday. The artifact, which scientists believe is about 73,000 years old, precedes the oldest known modern human abstract drawings from Europe in about 30,000 years.

"We knew a lot of things Homo sapiens could do, but we did not know they could make drawings," says Christopher Henshilwood, an archaeologist from the University of Bergen in Norway and leading author of the study.

The find, published in Nature , can provide insight into the origin of humanity, which laid the foundation for language, mathematics and civilization.

The ancient drawing was settled in Blombos Cave, which lies approximately 200 miles east of Cape Town. Archaeological sites on the site are from 70,000 to 100,000 years ago during the Middle Ages. Inside the cave, researchers have discovered Homo sapiens teeth, spikes, bone tools, engraving and beads made of seashells.

Luca Pollarolo, a researcher at the University of Witwatersrand in Johannesburg, South Africa, cleaned a few unearthed from the site In 2011, when he stumbled across a small fling, only measuring the size of two thumbnails, it seemed to have been pulled. The markings consisted of six straight, almost parallel lines crossed diagonally by three slightly curved lines.

"I think I saw more than ten thousand artifacts in my life so far and I never saw red lines on a flap," said Dr. Pollarolo. "I could not believe what I had in my hands."

He contacted Dr. Henshilwood and Karen van Niekerk, also an archaeologist from the University of Bergen, and they agreed that the fleet was worthy of further investigation.

They took the artifact to France to be investigated by Francesco d'Errico, an archaeologist at the Bordeaux University. There the team must decide if the red lines were drawn on the stone, and if they were not where were they made.

Using a microscope, a laser and a scanning electron microscope, they decided that the marks were on top of the mountain and that they were made of red yokes, a type of natural pigment that was often used to make prehistoric cave paintings. In fact, ancient people in the Blombos Cave made primrose as far back as 100,000 years ago.

"Then we had to decide how they were doing these lines," says Dr. Van Niekerk. "Was they painted or drawn?"

They recreated the paint and then formed a wooden stick in a brush and made strokes similar to the sample. They also made an occasional and drawn lines. They then compared color marking and crayon with what they had seen on the artifact.

They decided that the old cross-sphere pattern was a drawing, not a painting, made with an oak-tip tip most likely to be measured only 1 to 3 millimeters in thickness.

To distinguish between a painting and a drawing is important, according to Dr Henshilwood, as ockra color batches can dry. It makes it less useful than an otter criticism used by an old man when he or she wanted to make symbols without breaking to mix color.

They can not say for sure what the purpose of the drawing was and whether it was just doodling or if it was a little more meaningful. But they have their guesses.

"I'm convinced they're more than just random brands," says Dr. Henshilwood. "I think it's definitely a symbol and there's a message there."

They also believe that the drawing was made by a member of our kind and not another hominin, because they have only found Homo sapiens left in the cave. 19659002] The earliest examples of abstract and figurative drawing techniques prior to this discovery came from the Chauvet cave in France, the El Castillo cave in Spain, the Apollo 11 cave in southern Namibia and Maro's caves in Indonesia, some of which date back to about 42,000 years since. A recent study has also found Neanderthal paintings made of oaks in Europe that were 64,000 years old.

"Until now, we did not know that the drawing was part of the repertoire of this old Homo sapiens," says Dr. Van Niekerk.

Dr. Henshilwood said that similar cross and crossmark patterns have been found engraved in pieces of marshes found in the cave. The latest finding, he said, provided additional evidence that early people in Africa used symbols and abstract thinking across a multitude of methods, including drawing, painting, engraving and jewelry.

"The authors claim that this is not yet the first known intentionally visual label of Homo sapiens," said Paul Pettitt, an archaeologist at Durham University in England who was not involved in the study. "The new discovery is crucial to our understanding of the emergence of visual culture, as it documents the transfer of one of these visual motives into stone in a deliberate act."

But Lyn Wadley, also an archaeologist at the University of the Witwatersrand, said she was "not convinced of deliberate" drawing "on the sheet based on current evidence."

If the drawing was on a rock that once was part of the gravestone used to make an oracle, she would have liked to have seen the scientists carry out further experiments that replicated other activities than drawing to show that the egg marks were not accidentally made during grinding of powdered peas.

Dr. Errico opposed and said that grinding of powdered orcs would have left large red spots on the sheet, not the very thin red lines as they look at their artifact.

While the debate remains unresolved, scientists have given the artifact, originally called the G7bCCC-L13, a new name, drawn from a much more modern symbol.