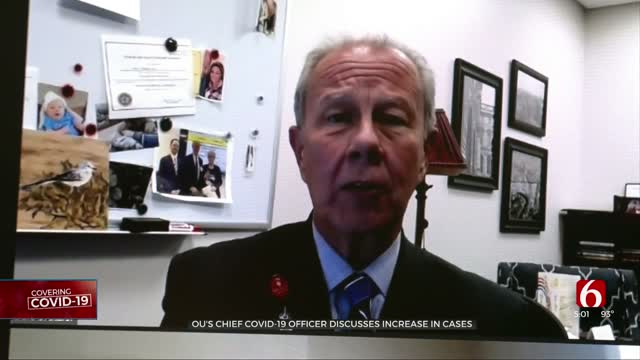 Health experts said one reason we are seeing an increase in the number of Oklahomans testing positive for COVID-19 is because more people are interacting with each other.

OU Chief COVID-19 Officer Dr. Dale Bratzler said more young people are testing positive for COVID-19 and the latest data shows that more people under 50 are in hospital because of the virus.

Barbecues, trips to the lake and holidays gather people again, but Dr. Bratzler said it is also part of the reason why younger people are spreading the virus.

“They are social, they are mobile and they can infect people who are in high-risk categories such as cancer patients, patients with diabetes or other conditions that put them at particular risk,”

Dr. Bratzler said another factor for the increase in positive cases is due to more people being tested. He said we see fewer people dying from the virus now compared to March, when Oklahoma said it was the first positive case.

“Six percent of the people who had done a test that were positive would die. I looked at the data this morning and as of today, the mortality rate for those who have a confirmed test is 2.4 percent,” Dr. Bratzler said.

The latest data from the state shows that more than 17,000 Oklahomans have tested positive for the virus. Dr. Bratzler said the number is estimated to be ten times higher because of people who are asymptomatic or not tested.

He said that if it is possible to achieve herd immunity, which means that a large part of society has become immune to COVID-19, says the World Health Organization 60-70 percent of the population must be infected.

“Although the mortality rate for this virus is only about 0.3 percent, which is half of what the WHO recently estimated, about 7200 Oklahoma’s would die when we came to herd immunity,” said Dr. Bratzler.

Although the flu season is still several weeks away, Dr. Bratzler said it will be crucial for people to get a flu shot so doctors can tell the difference in COVID-19 symptoms and flu patients.