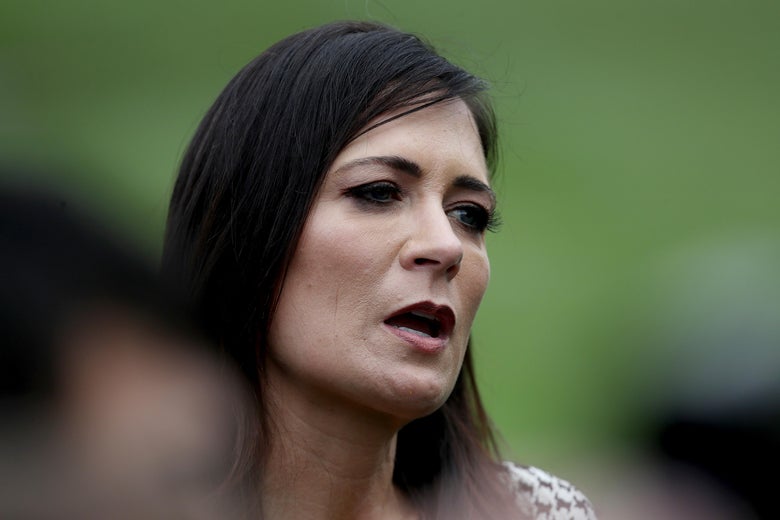 On Tuesday, the White House press secretary Stephanie Grisham made the bizarre claim that aides to President Barack Obama left haunting notes in the White House during the transition between administrations.

The claim was met with skepticism, since the odds that reports of such behavior from a rival party's administration would be kept for almost three years are low.

Those who worked in the White House at that time were quick to mock Grisham's claim and accused her of lying.

Former Special Assistant to the President and Senior Director of Arms Control and Non-Proliferation at the National Security Council:

This is an outrageous lie. I know. I handed over to the Nuclear Power Agency at NSC. Shameless and disgusting. @PressSec should be fired. https://t.co/6sXIqMnmJYebrit19459009??— Jon B. Wolfsthal – Alias ​​Globalist (@JBWolfsthal) November 19, 2019

Former Special Assistant to the President and a spokesman for the National Security Council:

She's right about a point. I left a note – hidden on my desk – for my successor. I wished him success and encouraged him not to get tangled despite pace and obstacles. I also left my personal email if he wanted to seek sincere advice.

A former lawyer at the White House:

I was there. This is a complete lie. On the contrary – we left them briefly to try to help with the transition as much as possible. https://t.co/WxMNIiwBuVebrit19459009??— Daniel Jacobson (@Dan_F_Jacobson) November 19, 2019

This is absolutely not true.

Obama repeatedly and publicly praised the Bush cooperation during the 2009 transition and promised that we would give the same cooperation to the one who followed us. And that's what we did.

. @PressSec absolutely lies. My team occupied almost an entire hall with offices in EEOB. Before I turned off the lights on January 19th, I took a walk through each one to make sure all federal records (or other notes) were filed properly.

Create notes to back this up. I can't imagine a single one of my former colleagues who would. From @BarackObama onwards, we all tried to help facilitate a smooth and orderly transition, just as President Bush and his team had done for us. https://t.co/tjY3zGdRX8vud19459009??— Valerie Jarrett (@ValerieJarrett) November 19, 2019

In a statement to NBC News, Grisham later said she had been exaggerated.

"I really didn't imply that every office had that issue," Grisham wrote, according to NBC. “I actually had a lovely note for me in East Wing, and I found the woman and thanked her. I was talking specifically about our experience in the lower press office – nowhere else. I don't know why everyone is so sensitive! "

Technically, it would be very difficult to prove that someone somewhere did not leave an unpleasant note in the White House. But no one has yet come forward to back up Grisham's claim, and several reporters have said they saw no evidence of letters in the press area:

I was in the West Wing on the evening of January 20, 2017, talking to several incoming Trump officials as they moved into their offices. I saw no offices "filled with Obama books" and no one mentioned "you will fail" notes. Here are pictures I took at WH that evening pic.twitter.com/TUZhbO6QbN

Close the loop, the former press secretary for Michelle Obama provided the letter that she says she left to the next first lady's communications director: Stephanie Grisham.

One-year-old boy died after being shot at NYC cookout

Donald Trump Jr. to self-publish book on Biden – will he fix typos first? | US news