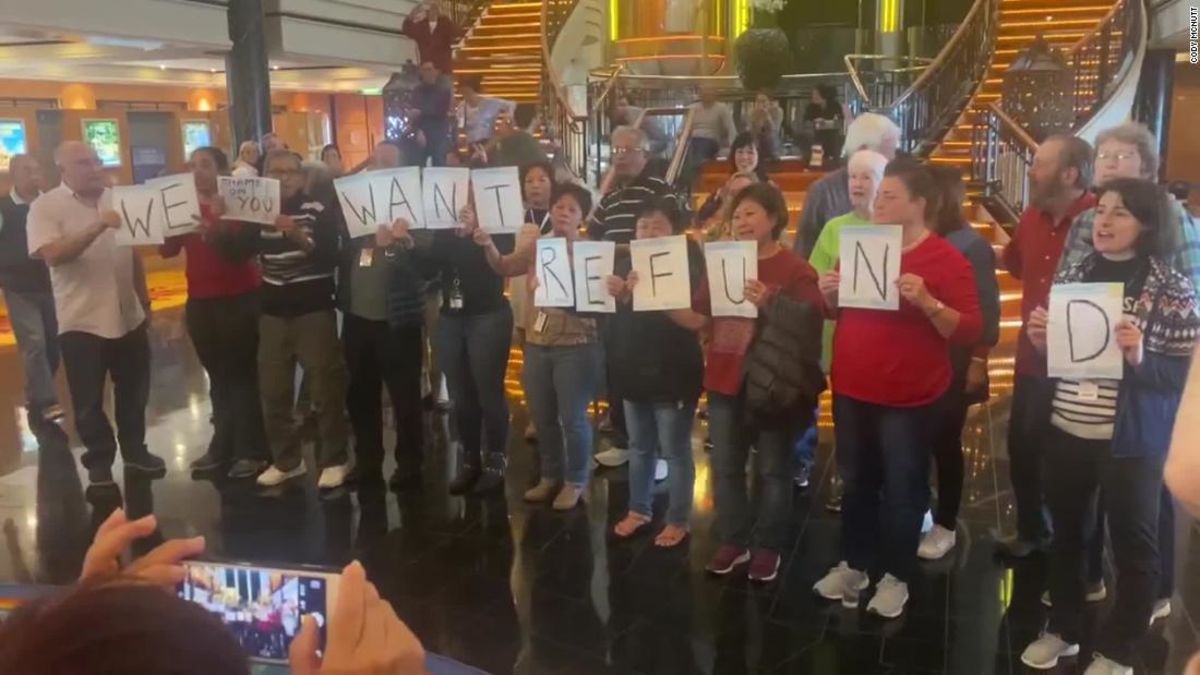 (CNN) – "Refund! Refund! Refund!" was the departure among passengers gathered in the cruise ship at Norwegian Spirit earlier this week after the operators canceled another port of call on the two-week European itinerary.

"And it's a full refund, not the rebate because there will be no cruise with you again," hears an agitated man say in a video posted by passenger Matt Rogers.

Matt and Thelma Rogers in Austin, Texas, were in Europe to celebrate both birthdays. They understand that the itineraries are changing as they have been on 1

6 cruises. This is their first sailing with Norwegian Cruise Line.
"Let me be clear that I do not embody what those passengers did," wrote Matt Rogers in a Facebook conversation with CNN Travel. "It was inappropriate & over the line but the staff could have handled it much, much better," he said.

"They allowed it to get there people were really nervous about their safety."

And "when things got high, the General Manager just left the atrium that just escalated," Rogers wrote.

Passengers gathered in the atrium for Norwegian Spirit cruise ships on Monday to protest skipped ports of call.

The vessel, Norwegian Spirit, has a capacity of more than 2,000 passengers.

The trip, called "Mystical Fjords", started from Southampton, England, and was supposed to include stops in Amsterdam, Reykjavik and Akureyri, Iceland, all of which were canceled due to bad weather, according to Rogers. The ship made some of its originally planned stops, including Belfast and Dublin.

Two call ports were added in Norway when the Iceland peaks were interrupted, Rogers said. A stop in Greenock – outside Glasgow, Scotland – on Monday was delayed first as another vessel was repaired. But crew members announced in the middle of the morning that the ship would not be able to dock due to high winds, Rogers said.

"That's when everyone in the atrium lost it," he said. "Think of it every time they change the itinerary, most people have to change / cancel tours … some of which are non-refundable."

Passenger Cody McNutt from Denver also filmed the protests, which he said lasted until about 10 p.m. that night. McNutt created the Twitter handle NCLHELL to document the journey.

His post included scenes of the protests as well as pictures of toilets that were out of operation and a letter from McNutt and others to the cruise ship.

Norwegian Cruise Line released a statement about the sailing, saying: "Unfortunately, the Norwegian Andes' route was affected by severe weather conditions. and disappointments that our guests experienced. "[19659003] The cruise line has offered passengers a 25% credit on a future cruise.

The cruise ship's transport agreement states that the itineraries can be changed according to the cruise company's assessment.

Terms published on the Norwegian Cruise Line website say that the company "has the right to cancel, move, postpone or replace planned sailing or itinerary without prior notice," for any reason, including weather conditions, mechanical difficulties and work stoppages.

"We understand that it is disappointing when we cannot use the ports that our guests have been looking forward to visiting," said the cruise council statement. "However, we ask for the patience, cooperation and understanding of our guests that severe weather conditions are an act of God and cannot be controlled, affected or corrected by the cruise line."

Rogers and his wife have booked another cruise on the same ship that started on October 11, and they are worried about the trip they booked back in December.

"I think we are talking to our dollars, and NCL will not get more from me," he said. [19659003] Photo at the top of this story courtesy of Cody McNutt.