Grocery store, wholesale | Price difference on the same item in the same chain: 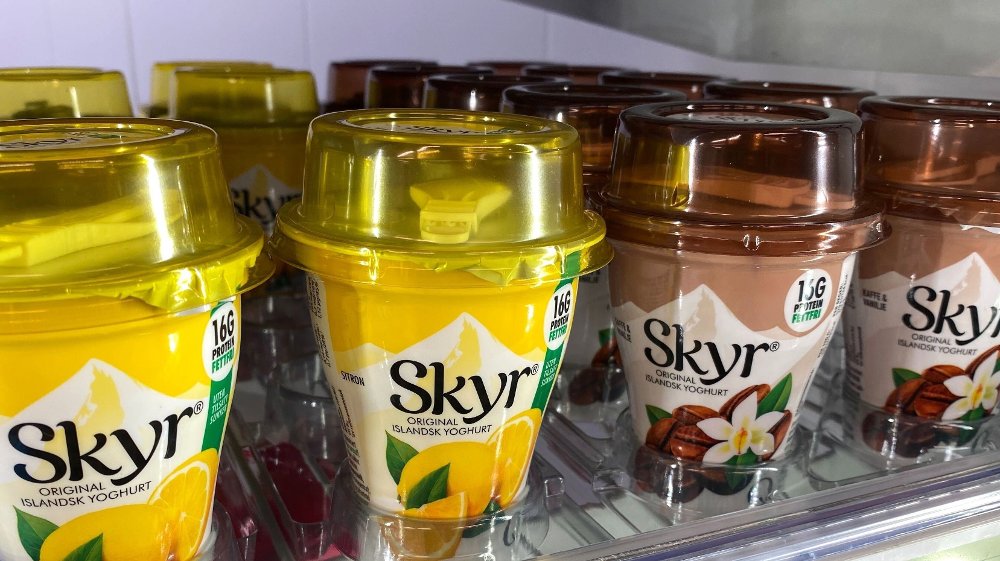 The chains refer to oblivion after promotions, while “Gjerrigknarken” believes that it is a sales process from the food industry when the same product has a different price.

Many things you find in the grocery store have varieties with different flavors. Even if one would think that the same product, regardless of taste, would have the same price, this is not always the case.

Skyr from the Q dairies is an example of this. In recent weeks, there has been a large price difference for certain varieties. When Nettavisen took a check in three discount stores in Oslo this week, it turned out that all chains had Skyr for SEK 1

0 with the exception of one flavor variant. At Kiwi and Extra it was coffee & vanilla that cost SEK 16.40, while at Rema it was orange & mango.

– We understand that customers react. I call this naughty prices, and it’s too stupid, says Harald Kristiansen, communications manager for Coop Norway.

Both Coop, Kiwi and Rema 1000 say that the price difference has arisen as a result of price reductions on several flavors.

– Some of the Skyr variants were already driven in price when we launched our price reduction on 15 June. We used the campaign price on the market as a starting point and lowered the price further, explains Kristine Aakvaag Arvin, communications manager at Kiwi.

– The coffee and vanilla variant was reduced by 20 percent in price in connection with Kiwi’s large price reductions. Now it is back to the same price as before the price reduction, like the other variants, she adds.

Arvin says that the price is now back to the starting point for those who participated in the campaign, although some of the variants still have an abnormally low price.

– The low price for most flavors has remained the same after a promotional period, while oranges and mangoes are sold at normal prices, he says.

Read also: How much do you save on the food chains’ benefit program (+)

Kristiansen in Coop explains the price difference by saying that a competing chain has probably had a campaign for some of the flavors and that the prices for different flavors have therefore moved differently.

– This is what can happen when prices are adjusted in relation to competitors. When we follow a competitor on a campaign, we can quickly forget that we have different tastes in the same product. In the heat of battle, we forget to adjust the price of others, he explains.

When Nettavisen made Coop aware of the price difference, they took action.

– We immediately reduced the prices to ten kronor for all tastes, says Kristiansen.

He points out that their goal is to be at least as cheap as the competition. But a number of Nettavisen’s tests of food prices, in collaboration with Enhver.no, show that Extra usually ends up in third place after Kiwi and Rema – which turns into first place.

Coop explains that there are several explanations for why not all product flavors are put down during a campaign.

– One reason is that it is often popular products that are selected, and the other is about the amount that manufacturers can deliver of a product. At the same time, it is more expensive for us to buy products we sell a little of, and then it becomes expensive to have a campaign about the product, Kristiansen explains.

Another reason is that it can be expensive to lower the price of all variants, for example if Coop has 12 variants while the competitor who starts a campaign only has six.

Rune Nikolaisen, who runs Gjerrigknark.com, believes that everything is a strategy from the stores.

– I think it’s an afterthought with everything in the store, and that this is a sales process. The food chains probably know very well that only a minority looks closely at the price and does not see that there are no offers on all varieties, he tells Nettavisen.

Read also: This is how he will take XXL to new heights: – It is the customers who are the boss

He has seen a number of similar examples before.

– For example, I have seen that there is a clear difference between buying a bag of 800 grams of Q-yogurt with vanilla flavor or forest berry flavor. There have also been some Kremgo varieties that have been offered, while others have not, he says.

Another, but somewhat different example, is Norway’s cheese.

– It is the smallest Norwegian cheese offered this week that has the lowest kilo price, he says.

Feel free to say your opinion in the survey before you read on, the article continues below.

– If someone runs a campaign for certain products, we often get a 30-40 percent increase in deliveries, and sometimes more, Q-manager Bent Myrdahl explains to Nettavisen.

– We have noticed that some have run lower prices on Skyr recently, but it has varied from chain to chain. I want to believe that they have a bestseller strategy and choose which items to sell based on this, he adds.

He does not know how campaigns on certain flavors of, for example, Skyr affect the flavors that are not for sale. In any case, he believes that campaigns have no bearing on what consumers choose.

– Over time, consumers will decide what flavors we will offer. There is a big difference in taste, and it is the customers’ preferences that determine what they buy – a campaign does not determine that, he says.

He says that there is a flavor variant of Skyr in particular that stands out – blueberries.

– It sells the most in Norway anyway, he says.

Myrdahl also says that they see that it is the yoghurt chains that often run a lot of campaigns, but they also notice that campaigns can trigger further sales of sour cream.

– Especially if there is sales of taco products, there can be a 20-30 percent increase in sour cream sales, but also if there is an offer of sour cream, he says.