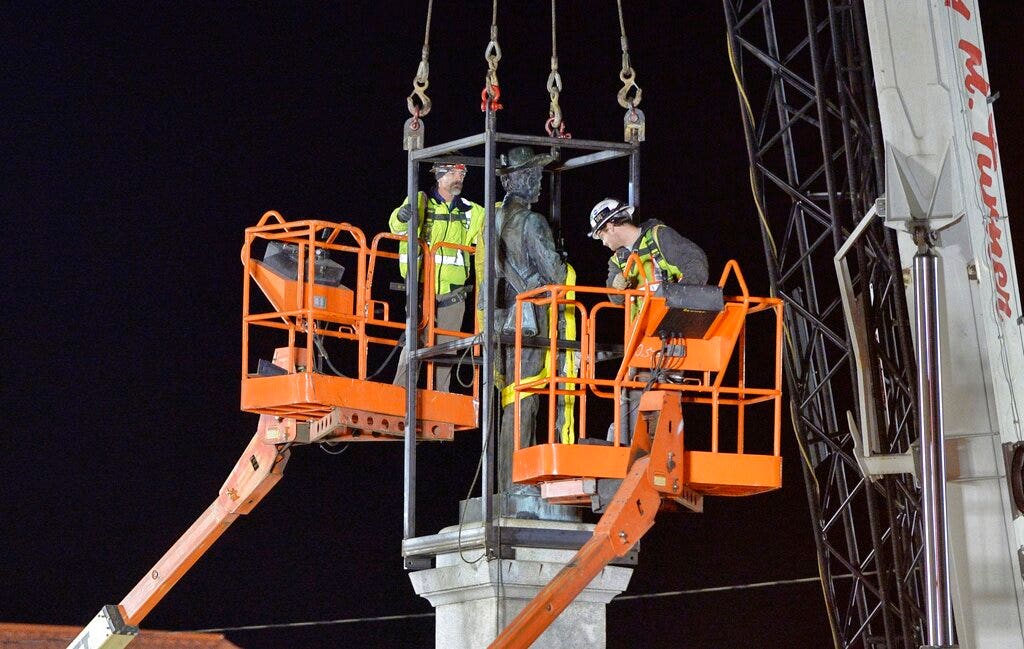 A Confederate statue that stood for more than 100 years was removed from a North Carolina court early Wednesday and joined a handful of sites around the state where such monuments have come down despite a law protecting them.

A crowd of several dozen gathered outside the historic court in Chatham County to watch workers carefully dismantle the 27-foot tall statue. TV news films showed that workers on top of motorized lifts secure the statue, which was then removed with the help of a crane.

Workers prepare to remove a Confederate statue from their Chatham County Courthouse in Pittsboro, NC
(The News & Observer via AP)

Taking down Confederate statues in North Carolina is rare because the state passed a law in 2015 that restricted the removal of public monuments.

County officials argued in court that the monument was private property owned by the United Daughters of the Confederacy. A judge who heard the group's challenge refused to block the removal.

In recent weeks, protesters for and against removal had gathered around the statue, leading to mixes and some arrests.

"The last few months have been a painful time for Chatham County. We have experienced high emotions, divisions and even violence that have affected residents, businesses and the general sense of our community," said the Chatham County Board of Commissioners Mike Dasher in a statement. "What is clear now is that the overwhelming majority of our residents are eager to move on."

A state compilation shows that the Confederate monuments are located in modern or historical courts in about half of the state's counties.

REVOLUTIONARY WARRANT CHAIR NEXT 50 YEARS BACK ON VIEW

Spectators of the statue's removal Wednesday had mixed opinions.

Robert Butler, a supporter of the monument, described the abduction to Raleigh's WRAL TV as "heartbreaking."

"A statue never injures a soul, just like a memorial," he said. "Do they hurt anyone?"

But Sandra Day of Moncure, who is black, told The News & Observer that she supported its removal. She said she got out of bed and put on a heavy coat to see the statue come down. "It is an honor and privilege to stand here," she said. "I wanted to see it myself."

The Associated Press contributed to this report .