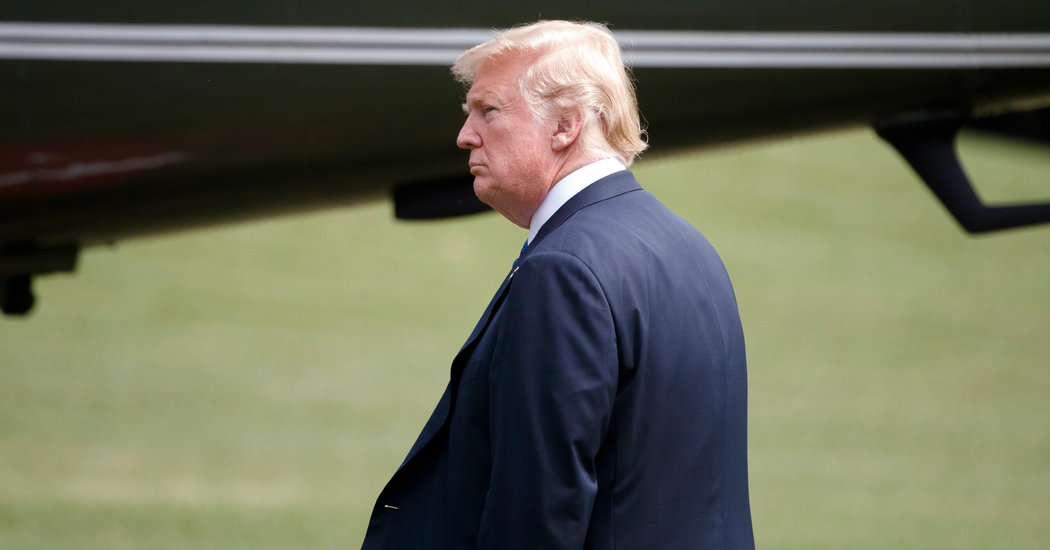 BRIDGEWATER, NJ – President Trump and the publisher of The New York Times, AG Sulzberger, engaged in a tough general collision on Sunday over Mr Trump's threat to journalism after Mr Sulzberger said the president misrepresented a private meeting and Mr. Trump accused the Times and other papers about risking life with irresponsible reporting.

Mr. Trump said on Twitter that he and mr. Sulzberger had discussed "the huge amounts of false news released by the media and how the fake news has turned into phrase," Enemy of the People. " "Sad!"

In a five-point statement issued two hours after the tweet, Mr. Sulzberger said that he had accepted Mr. Trump's invitation to July 20 to meet primarily his concerns about the president's "deeply troubled anti-press rhetoric".

"I told the president directly that I believed that his language was not only spitting but increasingly dangerous," says Sulzberger, who became the publisher of The Times on January 1.

"I told him that although the phrase" false news "is unlikely and harmful, I am much more concerned about his labeling journalists" enemy of the people, "continued Mr. Sulzberger." I warned that this inflammatory language contributes to a increasing the threat to journalists and will lead to violence. "

This is particularly true abroad, says Mr. Sulzberger, where governments use Mr Trump's words as a pretext to crack down on journalists. He said he warned the president that His attacks were "putting life in danger" and "undermining the democratic ideals of our nations."

Mr. Sulzberger's long, bluntly formulated rehearsal was a striking feedback to the president of the 37-year-old publisher of a paper that Trump has had one long and complicated relationship with. And it apparently turned out to be a nerve: The president fired a series of angry tweets in the afternoon and accused papers of being patriot isk.

"I do not allow our big country to be sold out by anti-trump hater in the dying newspaper industry," he wrote . "The failing New York Times and Amazon Washington Post do nothing but write bad stories even on very positive progress – and they'll never change!"

Mr. Trump, in his first tweet from his golf club in Bedminster, NJ, on Sunday morning, described the meeting with Mr. Sulzberger as "very good and interesting". But when he referred to the phrase "people's enemy," he did not make it clear that he himself started using the label about the press during his first year in the office.

He has continued to assail the news media at rallies and even at more formal presidential events and encourages the audience to chant "CNN sucks!" and to trigger his anger on the journalists in the back.

Talks to veterans in Kansas City, Mo. Last week, Trump said, "Stick with us. Do not believe the crap you see from these people, the false news." As members of the audience booed and hissed on the press corps , he added: "What you see and what you read is not what's happening."

In a statement, Mercedes Schlapp, a White House Communications Advisor, said "The president meets regularly with media members and we can confirm that this meeting took place." She did not leave any further details about the meeting or explain why the president chose to publish it.

The White House had requested that the meeting be held in the mail, according to the statement from the Times.

"But with Mr. Trumps tweet this morning," said the statement, "he has put the meeting on record so AG has decided to respond to the president's characterization of their conversation based on detailed notes AG and James trains."

In a telephone conversation, Mr Sulzberger described the meeting with Mr. Trump, as he had only met once before, as cordially. But he said he went into the oval office and decided to make a point about what he considered as the dangers of the president's inflammatory language.

Mr. Sulzberger recalled that Trump told us that newspapers had begun to send armed guards outside their offices due to an increase in threats to journalists. The president, he said, expressed surprise that they did not already have armed guards.

At another point Mr. Trump the pride of popularizing the phrase "false news" and saying that other countries had begun banning it. Mr Sulzberger replied that these countries were dictatorships and that they did not bribe "false news" but rather independent review of their actions.

However, Sulzberger said, at the end of the session he felt that Mr Trump had listened to his argument. The President, Mr Sulzberger reminded, told him that he was pleased that he had addressed these problems and would think of them.

Mr. Sulzberger said that he had no illusions that his comments would encourage Mr. Trump to limit their attacks on the news media. He said he urged the president to complain about the news coverage in The Times which he considered unfair. But he appealed to him not to systematically attack journalists and journalism around the world.

Tensions between Times publishers and presidents are nothing new. Early in the Bill Clinton presidency, Mr. Clinton to Mr. Sulzberger's father, Arthur Ochs Sulzberger Jr., who was then the publisher, about the editorial of the paper.

Mr. Sulzberger told the president that he liked them as "tough love", according to Susan E. Tifft and Alex S. Jones, who wrote a story of the Sulzberger family.

"Well, do not forget the love part," replied Mr. Clinton.

A decade later, Mr Sulzberger and top editors of The Times were invited to President Owens president of President George W. Bush in a failed effort to prevent the paper from publishing a long-term article on the Security Board's monitoring of telephone conversations without any legal rights warrants.

"In general, presidents in their contacts with newspaper publishers wanted to have them ruled," says Martha Joynt Kumar, a long experience of the relationship between the press and the White House. "They think if they bring the publishers and explain their goals and intentions, that would be helpful."

Mr. Trump regularly strikes the "failing New York Times", but he has also visited his offices and talked with his journalists. In the weekend The Times published an article about Mr Trumps daughter Ivanka and son-in-law Jared Kushner, who noted that they had invited the younger mr. Sulzberger for a dinner at the Manhattan home to commemorate Nikki R. Haley, the US ambassador to the UN.

Kaine and wife test positive for antibodies to coronavirus