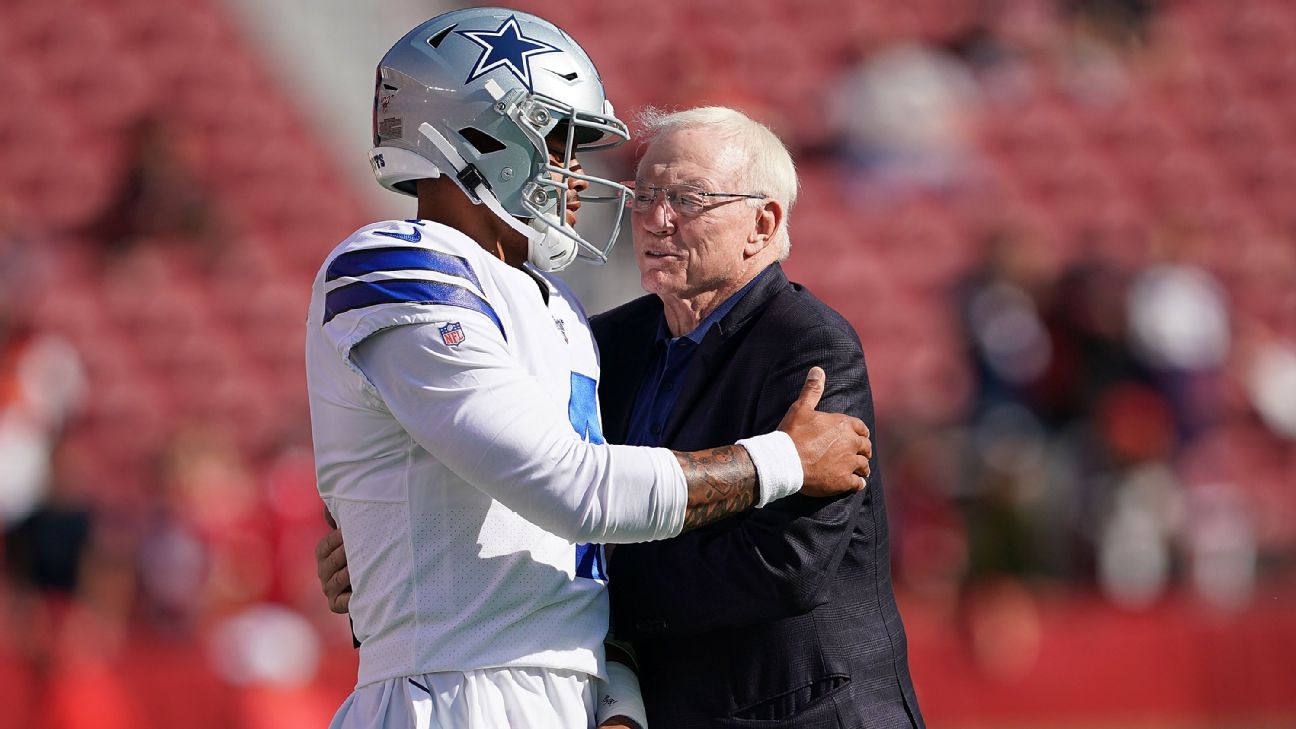 OXNARD, Calif. – At the opening of training camp on July 27, Dallas Cowboys owner and general manager Jerry Jones said the team didn't just do deals with quarterback Dak Prescott, receiver Amari Cooper and running back Ezekiel Elliott – but make the right deals to Keep a young roster together for the future.

With the Cowboys' time in Southern California coming to an end Thursday, the team is not close to a deal with any of their offensive stars, but Jones reiterated his stance, pointing to the recently passed as an example of when things go wrong relative to the salary cap.

"It's not like me going out here and buying something that I have to decide if I want to just spend to have that, "Jones said." That's not it at all. It's that I've come to realize that I can leave a DeMarcus Ware out of here because I don't have enough money because I paid it to too many others.

" That's what happened to me, and I don't want it to happen again. And we've got some top talent here. "

Ware was released after the 2013 season, with the Cowboys not even making a contract offer to their all-time leader in sacks. Ware signed with the Denver Broncos and won a Super Bowl ring.

The Cowboys made offers to Prescott, Cooper and Elliott that would rank in the top five at their positions, but there have been minimal negotiations recently. Elliott missed his 19th day of training camp in his holdout on Wednesday, and he faces more than $ 750,000 in fines for his absence. Prescott and Cooper have been in Oxnard, although Cooper has missed the past seven practices with a bruised heel.

Jones said he would feel comfortable continuing negotiations with the players in the regular season and said he has not been told by the players' representatives that talks would cut off by the time the Cowboys play the New York Giants on Sept. 8.

"The issue is – and the only bit of leverage is – can it go into law ular season? "Jones said." And that's where you start paying a price if you're a team, but the player pays a price in doing that, too. So all of that is, as I've said and tried to point out, when you've been in this and done it as often and as many times as I have, then it doesn't startle you. It doesn't alarm. "

Jones doesn't fear the lack of a deal impacting Prescott on the field.

" We're obviously proud of all the work we're getting into, and it's not an issue, his contract, as a play and frame of mind and what we're going to be doing this year, "Jones said." It's not an issue. It has no bearing on when I see it. It's something that is more about the future. "

Jones said until a deal is done, he wouldn't have an idea if one is close.

" It takes two, and both of us haven't said yes At the same time, "Jones said.

As for Elliott, Jones again acknowledged the running back's absence could stretch into the regular season.

" If it doesn't, it's probably no harm, "Jones said. [19659016] Jones said he did not communicate with Elliott but could call him if he wanted. Jones also said he received reports that Elliott is in good shape while in Cabo San Lucas, Mexico, during the holdout.

"Zeke has the ability to just completely hit the ground running if I can use that, "Jones said." We expect that and he says it and I believe him that he's in great shape, and so I don't think that will be an issue when he does come back. In the meantime, we have to be ready to go without him, and we're getting that way. "

Clearly, Jones would like to get a deal done with at least one of the trio.

" The answer is yes, but I'll repeat it: Would it be better if we can get one of the players done – and I'm not being trite – then not have any done of the ones you're talking about? The answer is yes, "Jones said." What may surprise you is we may come up with one that you have been asking about that might make a point in what I am trying to do. "